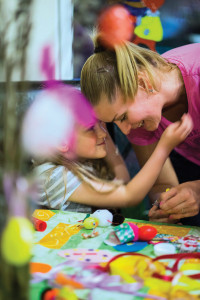 The first Easter I spent in my flat in Budapest, the doorbell rang on Easter Monday morning. I was a tad taken aback as I wasn’t expecting visitors. In the year I’d been living in the city I’d come to realise that, unlike Ireland, no one dropped by without calling first. For some reason, it’s simply not done.

When I opened the door to two Hungarian friends, they started to recite a poem that suggested I was a withered blue violet in need of watering (?!) – Zöld erdőben jártam, kék ibolyát láttam, el akart hervadni, szabad-e locsolni? – and then proceeded to sprinkle me with perfume. I was surprised. Not because of the poem and the perfume – I’d heard of locsolkodás (the sprinkling) – but because my friend had brought his girlfriend along to do the deed. I had thought then that this was something boys did to show their interest in a girl. I thought wrong.
It all dates back to the days when young farmworkers would throw a bucket of cold water over young women of marriageable age. This gradually evolved to include all ages, be they marriageable or married, of interest or not. Cold water has since been replaced by perfume, mainly in the cities, but there are still places in the country where the Easter Monday drenching holds fast, places where it still has some significance for the marriageble.
Mind you, it would be rather disheartening to  doll yourself up and then wait for the arrival of an admirer for him never to appear. Or, worse still, when he did appear, recite his poem, sprinkle his perfume and receive his painted egg, his homemade cakes and his beverage of choice, for him to skip along to the next girl in line and leave you sitting pretty.
In cities like Budapest though, modernity has won out. I’ve never seen any of my neighbours being sprinkled; I myself have not had a drenching since. And somewhat irrationally, I find that very sad. I’m partial to a good tradition, one that stands the test of time, no matter how uncool it might seem to some to be. I’m particularly partial to the Hungarian tradition of taking a basket of food to mass on Nagyszombat (Holy Saturday) to have it blessed by the priest. It’s quite the spectacle to see baskets filled with kalács (traditional Easter braided bread), red eggs and salt lining the altar steps.
Another favourite of mine this time of year in Hungary is the decorated egg and the nénis (older ladies) from the countryside who come to the city to sell them. Some are painted, some are engraved, some are embroidered, some are beaded, and perhaps the rarest are decorated with tiny metal horsehoes (if you ever find one of these, get me one, too – thanks). All are beautiful.
Chocolate eggs didn’t come to Hungary until the beginning of the nineteenth century, and even now most are handcrafted artisan pieces rather than the mass-produced ones that overflow the supermarket shelves in the UK and Ireland.
A tradition I’m a tad leery of, though, is the sibálás. On Palm Sunday, older boys weave sibas (whips) which can be up to a metre long. In Pázmánd, for example, on Easter Monday when the rest of the country is contemplating perfume, the boys visit the girls’ houses and after reciting the obligatory poem urging them to be fresher in a year and not as lazy as they are now (?!) – Esztendőre frissebb légy Ne olyan lusta, mint most! – start to whip them. Mmmm … not so sure about that one, lads.

Mary Murphy is a freelance writer and public speaker who will be at home to callers on Easter Monday. Read more at www.stolenchild66.wordpress.com