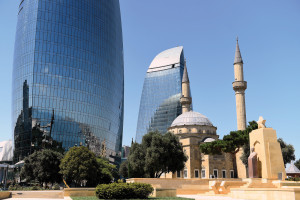 The Flame Towers and Shehidler Mosque

With its glitz and glass and relentless modernisation, Baku is a city on a desperate mission to outdo everybody else. The Budapest Times joined a media tour organised to promote the first European Games in the Azerbaijan capital in June.

Visitors flying in for the games, or indeed for any other reason, will arrive at the swanky Heydar Aliyev International Airport, which, like much in the oil-rich capital, is glaringly modern and designed to dazzle. It does. Then they will be ferried into town along a new wide and smooth highway, lined most of the way by attractive limestone walls and meant to ensure a quick, uninterrupted journey. It does.
On arrival, central Baku is spread around the shore of the Caspian Sea. Glittering buildings with all-glass shells have appeared around the city. With rapid economic development, many old buildings have been razed to make way for tall new ones, the most prominent examples of this vertical ambition being the curvy SOCAR Tower and the triple-skyscraper Flame Towers.
First impressions are that the inner city is attractive enough, with fine mansions built by early oil barons and the older Soviet-era apartment blocks of limestone mostly renovated (if only on the outside) in clean, graffiti-free surroundings. There are nice parks and fountains and an extensive boulevard alongside the Caspian.
Baku is also safe, we are told, and you are unlikely to encounter trouble in the street. (We point out here that Hungarian Prime Minister Viktor Orbán sent back his favourite axe murderer, Ramil Safarov, to Azerbaijan to a hero’s welcome, and The Budapest Times takes no responsibility should you encounter this creepy individual down a dark alley one starless night. Still, he only appears to be interested in chopping up Armenians.)
As well as the dust of non-stop construction, there is a sort of mantra in the air and it goes like this: “We hosted the 2012 Eurovision Song Contest, we’ll be holding the first European Games in June, the Formula One European Grand Prix in 2016, the Islamic Solidarity Games in 2017 and some Euro 2020 football games.”
Baku also made bids to host the 2016 and 2020 Summer Olympics but failed to become a Candidate City. They don’t give up easily and, with all the shiny new facilities for the European Games, now they’re thinking of a bid for 2024. 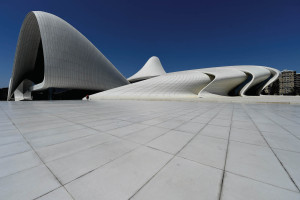 But it is to learn about the European Games from June 12-28 that we have come. The games were awarded to Baku in December 2012. It is a big undertaking and, as we media have already been told a couple of times, normally a city has about seven years to prepare for a major games but Baku is doing the job in only 30 months.
Some of the venues are brand-new and some are old ones refurbished. Whichever, they are being made to grab the eye. They will feature 20 sports with more than 6,000 athletes expected; over a million visitors, they say, and a television audience of over 1 billion.
The President of Azerbaijan, Ilham Aliyev, son of the previous president, the late Heydar Aliyev, has apparently set his 9.6 million citizens a good example by buying the first tickets. We do not know which sports he will attend, or if he will venture out of the VIP box into the mob, but possibly he is interested in shooting or boxing, it being generally agreed internationally that Azerbaijan is a repressive place with state-of-the-art corruption and a very dodgy deteriorating record on human rights.
Ilham Aliyev took power in 2003 after an apparently tampered election (and more since). Oddly, the man on the billboards around the city beaming benevolently on the cowed subjects is Heydar not Ilham.  And then there is Heydar Aliyev Park, Heydar Aliyev International Airport. Heydar Aliyev Sports and Exhibition Complex, Heydar Aliyev Avenue, Heydar Aliyev Arena and the “iconic” Heydar Aliyev Centre, a building as symbolic of its city as Sydney Opera House or Rio’s giant Jesus. This rather stunning edifice looks like it was made of white plastic that just melted in the sun. In fact it is shaped on Heydar Aliyev’s signature. 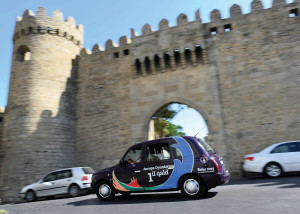 From the media bus, it is apparent that once outside the polished city centre and the striking sports venues the streets quickly become older and funkier, and the promise of widespread wealth from the country’s petroleum resources remains largely unfulfilled.
Still, no real need to bother yourself with Azerbaijan’s authoritarian politics if you are just visiting for a couple of weeks to watch over-sized men in tight trunks grappling on a rubber mat in search of sporting medals. But best to beware of taking photos in the wrong place, lest a security man pops up.
On March 20 we meet Jeremy, the Australian construction director in charge of completing all the sports venues before June 12, so he has 84 days to go. Standing amid the media group in the 90%-finished new National Stadium, an irreverent hack asks him if he expects to be deported to the penal colony of New South Wales if he misses the deadline.
Jeremy appreciates the joke but is adamant: “We’ll be ready on time.” And don’t stray off from the group and get hurt on the construction site, he warns. He doesn’t want to lose his job: there’s a troublesome divorce going through and he needs the money. Again he’s laughing but serious.
If you are reading  this on its publication day of April 3, Jeremy now has 70 days to go. In Australia he might be facing a snap strike at this moment, as a militant workforce seizes an opportunity to benefit, but the workers seem compliant here.
Whatever, looking at Jeremy’s snazzy facilities, there is no doubt that black gold-rich Azerbaijan is doing its utmost to show its best face to the world.
Not off the ground yet and perhaps in financial doubt is a plan to build the world’s tallest building, with the president of the Avesta Group of Companies, Ibrahim Ibrahimov, proudly trumpeting that the Azerbaijan Tower would rise to about 1,257 metres with 189 floors. The USD2 billion tower would be the centrepiece of the Khazar Islands, a USD100 billion city of 41 artificial islands that would spread 3,000 hectares over the Caspian Sea. It would supposedly house 1 million residents, 150 schools, 50 hospitals and daycare centres, numerous parks, shopping malls, cultural centres and university campuses, and a Formula 1-quality racetrack.
Thus it would outstrip Dubai’s Burj Khalifa, which with 163 floors plus 46 maintenance levels in the spire and two parking levels in the basement has been the world’s tallest since 2010.
It may not quite compare, but in September that year, with the inauguration of National Flag Square, Baku became home to the world’s tallest flagpole (162 metres), according to the 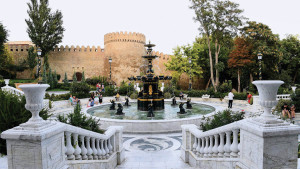 Guinness Book of Records. However, in what must have been a great blow to national pride, Baku has lost this record by just three metres to the city of Dushanbe in Tajikistan.
Another of Baku’s idiosyncratic claims to fame is the unexpected sight of hundreds of purple London taxis plying the streets, which were ordered for Eurovision. Many of the city’s drivers are reportedly unlicensed, and after a white-knuckle ride in the teeming traffic it seems that they are anticipating the grand prix, which will be on a street circuit.
We media types are taken to see the sleepy walled Old City, home to 1300 families on 22 hectares just down the hill from the Flame Towers and now a traffic-free Unesco-listed world heritage site. Most of the walls and towers, strengthened after the Russian conquest in 1806, have survived. This is probably Baku’s most picturesque area, with its narrow alleys and ancient buildings: the cobbled streets past the Palace of the Shirvanshahs, 11th-century Maiden Tower, two caravansaries, baths and the Juma Mosque.
Here in a two-storey caravanserai that dates back to at least the 12th century we find Mugham Club, a restaurant with excellent Azerbaijani food in an ancient stopover for camel caravans. Could there be a more romantic setting, conjuring images of traders, merchants, pilgrims, monks, soldiers and nomads seeking shelter in their travels on the old Silk Road?
This is the Baku of yore, more down-to-earth than the skyscrapers, swishy hotels and bravado plans to catch up with and outstrip the rest of the world.
In the Carpet Museum, amidst the exhibits three women work on marvellous wood and rope looms. To watch this ancient craft still being carried out is to reflect on Man’s capacity for ingenuity when he isn’t slaughtering other men.
Then there is the kitsch of “Little Venice”, a Disneyland-type area where “gondolas” drift along “canals” beneath fake bridges. This is alongside Baku Boulevard, a kilometres-long pedestrian promenade (“the world’s longest!” says someone) that runs parallel to the seafront and is filled with fountains, imported rare trees, a large Ferris wheel, bars, restaurants, a six-storey mall, amusement park, yacht club, musical fountain, and statues and monuments.
Back in Baku, many of the world’s hotel chains have a presence and of course there is plenty of cheaper accommodation. We flew Turkish Airlines via Istanbul and were hosted at the Hyatt Regency Baku. Probably pointless to try the Four Seasons for the games – the president’s “dignitaries” will be staying there.