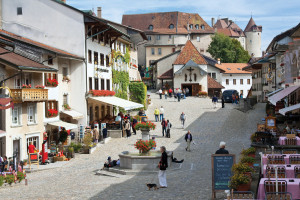 Choice is freedom, they say, and it’s definitely applicable to holidays – even if freedom is not to be confused with “free”. Today, international travel choices are almost endless and at least more affordable than, say, 10 years ago. The Budapest Times presents five appealing summer destinations around Europe, through the eyes of intrepid traveller and writer Andrew L. Urban. This week, he’s in Gruyères, Switzerland.

It’s a steep walk from Gruyères railway station to the historic Swiss hilltop village, world-famous for its cheese. But Gruyères (population 300) has a dark secret that only the most curious – or well informed – will discover: the gallery of H.R. Giger, Oscar-winning designer of the alien in Ridley Scott’s “Alien” (1979) and other things similarly subversive, erotic, fantastic and out of this world.
Inside the walls of this ancient village is a small cobbled square with a fountain, several restaurants and a modest souvenir shop – which also serves the best gruyère baguette sandwiches this side of cheese heaven. We ate ours right there in the shop.
But if you turn right coming out of this shop, walk through the square and through a narrow lane that leads towards the undulating cow fields where the raw material for Gruyères cheese comes from, on the right – like us – you will find the entrance to the H.R. Giger Museum.
We couldn’t miss it; the silent sentinel by the entrance is a tightly squatting metallic figure, eyes hidden behind large flying goggles with heavy screws around each eyepiece. The mouth is set in a firm “whaddayawant” and there is a breathing hose that winds around the neck.
Small, muscly with a strange little backpack, this bald figure (named Gogglebaby) is at once provocative and intriguing.
The entrance is a spacious lobby, within which stands a shiny black frame (like a four-poster frame) with curvy legs that reminded us of insects, housing the reception desk. The receptionist is in her 20s, symmetrically pierced with studs in ears, nostrils, lips and even cheeks, her black hair in a straight fringe.
She gives us a gothic grin and takes our money (EUR 8). Behind her are the shelves and display stands that you might find in any such shop – except the merchandise and posters don’t look anything like we have seen before. Not a single mug with “Giger Museum” on it. Books, furniture, portfolios, jewellery, posters, limited-edition prints and sculptures, rarities and miniatures all echo the works on display elsewhere – radical, erotic, biomachinistic, complex.
As soon as we begin climbing the stairs the house seems to swallow us. Even the floor covering is imprinted with a Giger design. The real world has receded. Narrow stairs take us to the first level, past smaller artworks from or inspired by the designs for “Alien”. 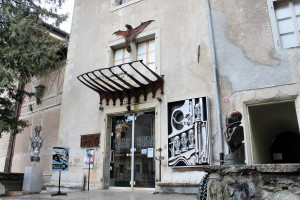 On the three levels of this old chateau, Giger exhibits an array of paintings, sculptures, replicas and posters that have a singular signature. The museum houses, intact, most of Giger’s film designs, including the artwork of “Alien” and “Alien 3”, “Dune”, “Species”, “Poltergeist 2” and “The Mystery of San Gottardo”.
The star exhibit, the full-sized Alien, famously called “the bitch” by Sigourney Weaver’s Ripley in the film, is ferociously striking in her glass cage. Almost hypnotic in her stillness, her shiny, elongated skull and familiar double mouth with small, savage teeth and its powerful torso… we move closer for a sharper look, feeling a slight trepidation in the underlit space. Did the bitch just move her vicious little mouth?
Why is all this here in tiny cheesy Gruyères, we wonder? It all began in 1990, when to celebrate his 50th birthday, Giger was invited to mount a major retrospective of his work at the Château de Gruyères. The exhibition, Alien dans ses meubles (Alien in the Furniture), was a huge success, attended by 110,000 visitors. Not all at once of course…
After many visits to Gruyères, Giger fell in love with the place and when he heard that the Château St. Germain was up for sale, the idea to establish his own museum and a Center of Fantastic Art was born: on September 11, 1997, he acquired the château.
With the help of architect Roger Cottier, former museum director Barbara Gawrysiak and a team of supporters, the museum opened (most of) its doors on June 21, 1998.
H.R. Giger was born in 1940 in Chur, 300 kilometres across Switzerland from Gruyères. Even as a child he had a passion for all things surreal and macabre. Meticulously detailed, Giger’s paintings are usually created in large formats and worked and reworked.
His fascinating biomechanical style, a unique synthesis of flesh and machine, has been realised not only through his remarkable paintings but also via sculptures, elegantly bizarre furniture, and architectural and interior design projects. His paintings have been displayed in galleries and museums throughout the world.
Breathless with the intensity of Giger’s artistic embrace, we step back into the real world and walk across the lane to the Giger Bar to catch our breath, but the biomechanical fusion of his world continues, offering more of the fantastic atmosphere. The black, high-backed, swivel bar stools have humanoid spines, the décor is alien, as is one of the coffee options (with or without alcohol).
We head back down the hill towards the railway station, opposite which is the tourist heart of Gruyères, a building housing the cheese storage unit (visible through glass walls as robotic arms move the cheese wheels around), a souvenir supermarket and the café/restaurant. We could have bought a cheesy souvenir but we already had a miniature alien to take home.

Adults: EUR 8
Note: Some of the works may not be suitable for children under 15