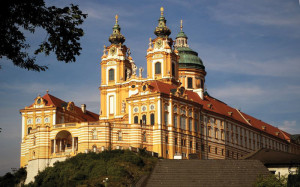 Choice is freedom, they say, and it’s definitely applicable to holidays – even if freedom is not to be confused with “free”. Today, international travel choices are almost endless and at least more affordable than, say, 10 years ago. The Budapest Times presents five appealing summer destinations around Europe, through the eyes of intrepid traveller and writer Andrew L. Urban. This week, he’s cruising in the Wachau Valley in Austria.

There are some 100,000 leather-bound volumes of books in the Melk Abbey library, we are told by the lady attendant, although the public room has only about 9,000 on show, each new volume specially bound to conform to the “abbey style”.
The books are arranged thematically on shelves from floor to very high ceiling, below and above the mezzanine balcony running the length and breadth of the large, airy room. Its dimensions are awe-inspiring and it is decorated in the same gilt-edged baroque style as the rest of this enormous historic abbey … cathedral … monument.
The vast Melk Abbey with its beautifully sculptured baroque garden sits atop a hill overlooking a bend in the Danube at the western end of the Wachau Valley, famous these days for its vineyards. But for these monks, the choice of beverage is apricot liqueur and another made from local herbs, samples of which can be purchased at the gift shop. Our souvenir bottle was intended for home consumption but it never reached home. The local speciality of apricot dumplings is the food match.
This abbey is one of the key reasons we took a Wachau cruise; a one-hour train ride from Vienna’s Westbahnhof, the abbey and the wonderful little village at its feet are a great starting point, but you need to be fit to reach the abbey from the village, up the path with the seemingly endless steps.
From the terrace on the main floor, we could see the bends of the Danube where we would soon be cruising, draught lager in hand.
Other than its fabulous library, Melk Abbey contains a museum, a spectacular marble hall, a magnificent baroque church, of course – and the stand-alone Abbey Restaurant in its own gardens, where on fine summer days guests can sit under large umbrellas – or inside the comfortable dining room with its sinful menu.
Things such as roast neck of pork with elderberry gravy, potato dumpling and elderberry-red cabbage strudel (EUR 12.70), or pork loin strips in cider and cream sauce with root vegetables and potato dumpling (EUR 11.40), and to finish with, the signature “Koloman” Abbey cake of walnuts with elderberry jam and a layer of chocolate (EUR 4.10). The cake is in honour of the abbey’s patron, Saint Koloman, who was hanged on an elderberry tree.
Apart from a couple of nudist beaches along the way (on the northern bank, where nudists happily waved to us), the primary attraction of these cruises is the UNESCO World Heritage-listed landscape punctuated by historic castles (such as the striking Schönbühel Castle atop a cliff), secluded picture-postcard villages, old churches, new vineyards and the seductive Danube itself, with speeding pleasure craft darting past our more stately river cruiser, the MS Prinz Eugen.
From Krems we took the train back to Vienna (this goes to Franz Josefs Bahnhof), but the Krems railway station is a long walk from the jetty, which we had not factored in. Consequently we had to run the last 150 metres to catch the 4.01pm train. A better plan would be to allow at least three or four hours at Melk Abbey (not including lunch) and another hour or two in Melk itself. It’s a charming village: make a weekend of it.
Inside the walls of this ancient village is a small cobbled square with a fountain, several restaurants and a modest souvenir shop – which also serves the best gruyère baguette sandwiches this side of cheese heaven. We ate ours right there in the shop.
But if you turn right coming out of this shop, walk through the square and through a narrow lane that leads towards the undulating cow fields where the raw material for Gruyères cheese comes from, on the right – like us – you will find the entrance to the H.R. Giger Museum.
We couldn’t miss it; the silent sentinel by the entrance is a tightly squatting metallic figure, eyes hidden behind large flying goggles with heavy screws around each eyepiece. The mouth is set in a firm “whaddayawant” and there is a breathing hose that winds around the neck.
Small, muscly with a strange little backpack, this bald figure (named Gogglebaby) is at once provocative and intriguing.
The entrance is a spacious lobby, within which stands a shiny black frame (like a four-poster frame) with curvy legs that reminded us of insects, housing the reception desk. The receptionist is in her 20s, symmetrically pierced with studs in ears, nostrils, lips and even cheeks, her black hair in a straight fringe.
She gives us a gothic grin and takes our money (EUR 8). Behind her are the shelves and display stands that you might find in any such shop – except the merchandise and posters don’t look anything like we have seen before. Not a single mug with “Giger Museum” on it. Books, furniture, portfolios, jewellery, posters, limited-edition prints and sculptures, rarities and miniatures all echo the works on display elsewhere – radical, erotic, biomachinistic, complex.