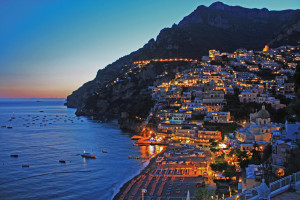 Choice is freedom, they say, and it’s definitely applicable to holidays – even if freedom is not to be confused with “free”. Today, international travel choices are almost endless and at least more affordable than, say, 10 years ago. The Budapest Times presents five appealing summer destinations around Europe, through the eyes of intrepid traveller and writer Andrew L. Urban. This week, he’s in Positano on the Amalfi coast of Italy. 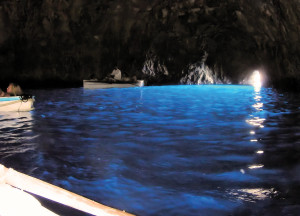 The lighting carefully carves out the players on stage, illuminating the depth of the scenery, using the full range of colours and giving a fantastic three-dimensionality to the set. The effect is one of synesthesia. If the yellows and the blues of the lights could speak they would be rising and falling with the swirling waterfall of Mozart’s music.
The little motor boat with the red fish sign flying on what would have been a mast had it been a yacht, approached the lower side of Positano quay where a dozen of us had gathered in the blazing sun, hoping to get a seat. It was 11 in the morning and there would be another boat every half an hour or so until 1pm, but we were eager. We’d heard that Da Adolfo beach restaurant, only accessible by boat, was a splendid place for lunch, serving fresh seafood in a relaxed (if seemingly exclusive) beachside atmosphere.
It was Sabrina, the sales assistant at one of the frock shops in town, who recommended Da Adolfo; she said it wasn’t necessary to book. Well, said Sergio, the tall and charming owner of Da Adolfo, when we clambered ashore, that’s true, but if you don’t make a reservation you’ll have to wait until everyone who has booked has eaten … but then he added with a big smile: “No one has ever left here without lunch!”
So, reassured, we hired a deckchair (EUR 7 each) on the hot volcanic pebble beach and sipped our Aperol spritz (three parts Aperol, two parts Prosecco, a dash of soda and slice of orange) after our swim. And sure enough, we were soon enjoying their fresh mussels in tomato and garlic sauce. And other fresh fish things.
The boat trip from the main beach to this hideaway also gave us a strikingly beautiful snapshot of the Amalfi coast, cliffs rising dramatically from the rippling waters of the Mediterranean, interspersed with verdant gorges, splashes of bright purple bougainvillea twisting through the greenery like an artist’s bravado.
We were half-way through our week at Positano, having arrived on a rather dull Tuesday evening by Tony “Taxi” from Naples airport. Tony chatted and provided running commentary, immensely proud of the entire region, as were the other locals we met.
Built into the rugged cliffs, Positano is the jewel of the Amalfi coast. The view from our balcony encompassed the foot of the western cliff-face with the hotels and homes clinging to it and the open expanse of the Mediterranean to the south and east. Like most hotels in the area, L’Ancora (The Anchor) has ceramic floors and decorations, ceramics being a local speciality.
L’Ancora is half-way up Positano’s winding, narrow main street (via Cristoforo Colombo) and is unusual in that it has only a breakfast room (but what a view!), while the Covo del Saraceni, its five-star sister hotel down on the main beach, welcomes L’Ancora guests to use its pool, restaurant and bar.
L’Ancora, with its giant old anchor at the entrance, is also adjacent to the fabulous Le Sirenuse hotel, with its dining room famous for the 400 candles that light the restaurant on summer nights. It has its own branded boutique across the road.
There is no shortage of hotels here, of course. Many are splendid (and expensive) beyond belief but there are some bargains to be had. Local knowledge is valuable. That’s where Tony “Taxi” came in, giving us pointers to restaurants, wines and excursions during the 90-minute drive from Naples airport.
We had to visit Capri, where the Blue Grotto tour is de rigueur, one of the unique natural wonders of the region. The ferry from Positano is about 30 minutes and passes the famous Siranuse islands, once owned by Rudolf Nureyev, who spent the last three years of his life there.
The spectacle of the underwater blue light show of the Blue Grotto is caused by the unique way the sunlight is captured through the tiny cave opening.
Getting there began with a motor launch ride from Capri harbour, along the coast for about 25 minutes to the mouth of the grotto, where we bobbed about waiting our turn among the small flotilla of boats (some private) bringing visitors to the entrance. Here, once it was our boat’s turn (arranged by some secret code we couldn’t figure out) we transferred to a smaller boat usually for three or four people (but we were just two), and the equivalent of a gondolier, who stood and shoved and sang and joked his way through the amazing grotto, working hard for his tip. We gave him EUR 5.
The Amalfi coast is usually awash with tourists, yet the sublime location and spectacularly dramatic landscape provide over-riding reasons to experience this region at least once – and there are plenty of temptations to return. The extraordinary lemons that grow here and provide the fuel for litres and litres of the locally brewed limoncello are but one.

Wizz Air offers three flights a week each way between Budapest and Naples (nearest airport) at fares from HUF 16,990 to HUF 45,990 each way.

Naples to Positano:
Several hotels will arrange a dedicated taxi (advisable) at about EUR 120 (HUF 36,428)