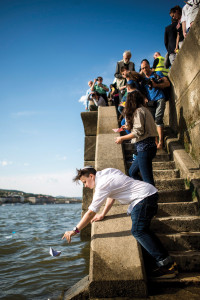 Hungary cannot stand mute and helpless over the spreading of evil ideas, Minister in charge of the Prime Minister’s Office János Lázár has told a commemoration marking Hungary’s Holocaust Memorial Day. After what happened at the Danube embankment in the winter of 1944 – when Jews were shot into the river by Arrow Cross militiamen – and in Auschwitz “there can be no such thing as innocent anti-Semitism, anti-Gypsy sentiment or segregation in the Hungarian language”, he said. There are to be no admissions made to “the successors of those who dragged our compatriots to the embankment 70 years ago” or those who “today spit into the orphaned shoes left behind by the murdered”. Lázár was referring to recently revealed evidence from five years ago that Jobbik MP Gergely Kulcsár had spat into one of the Danube bank memorial’s bronze shoes. Since 2001 Hungary marks April 16, when in 1944 the incarceration of Jews into ghettos began. Hungary had a Jewish community of 725,000 before the Second World War. Two-thirds were exterminated. US Ambassador to Budapest Colleen Bell said Hungary has made major progress in facing up to the tragic events of its history, including its role in the Holocaust. But more should be done to combat people who promote hatred and Holocaust denial, and try to attract support from anti-Semites by using coded messages and double-speak, she said at the Páva Street Memorial Centre. The Holocaust had been the most tragic period in human history and must not be allowed to be forgotten. Prime Minister Viktor Orbán said in a statement to mark the day that after the historical and moral storms of the 20th century, the country’s constitutional system now guarantees the belonging of Hungarian Jews to the nation. “The community of Hungarian Jews can rely on the respect, friendship and protection of the Hungarian government,” he said. The aim was for Hungary to remain a safe and calm place for all citizens in an increasingly uncertain and restless world. 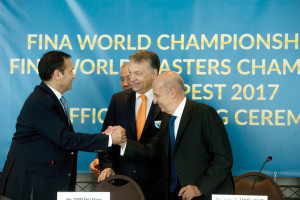 Prime Minister Viktor Orbán (middle) and president of the international swimming federation FINA Julio C. Maglione (right) have signed the agreement under which Budapest will host the World Aquatics Championships in 2017. The signing ceremony in Lausanne was attended by FINA managing director Cornel Marculescu (in the background) and Hungarian swimming federation leader Tamás Gyárfás (left). The event was originally planned to be held in Guadalajara in Mexico but the city pulled out in February for financial reasons. FINA announced on March 11 that it had switched the event to Budapest. Orbán met International Olympic Committee head Thomas Bach later in the day and noted that the committee  had changed its Olympic Agenda 2020 programme to allow cities with a population less than 15-20 million to bid for the Olympics. He said Budapest is working on preparations, and “if necessary, the government will stand by the Olympic cause, though this is the business of the sports world”.

French film “Fidelio, Alice’s Odyssey” has won the Breaking Waves Award of the 22nd Titanic International Film Festival that ended on Saturday. There were eight films in competition for the main festival award and they all focused on female lives. Head of the international jury Borislav Andelic described director Lucie Borleteau’s film as “eventful and atmospheric” and praised Ariane Labed in the title role. The jury granted a special award to Finnish drama “They Have Escaped” by director J.P. Valkeapaa. The audience award went to “What We Do in the Shadows”, a horror comedy from New Zealand. 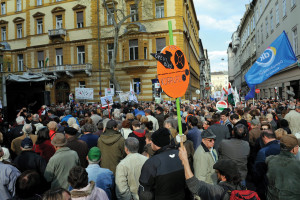 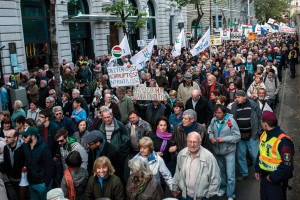 Organisers estimated about two-three thousand people attended an anti-government demonstration in central Budapest and demonstrations were also held across the country on Sunday where speakers railed against “corruption on the level of the government”. The protest in the capital city began at the Eiffel Palace office building near Nyugati railway station and was organised by civil groups with support from opposition parties. Among the speakers was lawyer Tamás Lattmann, who has been behind an initiative for 19 referendum questions to “disassemble the government”. He said it was the most important achievement of the past month that the National Election Committee approved for a referendum the initiative to make public the asset declaration of not only politicians but family members with whom they live. Lattmann said he had turned to the supreme court, the Kúria, over the questions that the election committee had rejected. He expressed hope for a favourable decision by the Kuria, thus allowing a referendum. Flags and signs of several opposition parties and organisations were held by demonstrators, including the logos of Együtt (Together), Democratic Coalition, MoMa and Solidarity. The protesters marched to the National Bank. Anti-government demonstrations were also held in Miskolc, Győr, Pécs, Debrecen, Békéscsaba, Tatabánya, Székesfehérvár, Szekszárd, Kecskemét, Nyíregyháza, Szombathely, Szolnok, Eger, Szeged, Kaposvár and other centres. The parliamentary group of Fidesz said the fight against corruption should be started by the left wing among its own organisations. It said the same people are still sitting in leading positions on the left who had been involved in the most corrupt government ever. 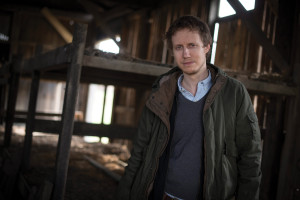 Hungarian film to compete in Cannes

Hungarian first-time director László Nemes Jeles’s (pictured) feature film “Son of Saul” will compete at this year’s Cannes Film Festival, the 68th, in May. The last time a Hungarian first-time director’s film (by Sándor Sára) was invited to compete in Cannes was in 1969. Cannes artistic director Thierry Fremaux said “Son of Saul” is expected to attract a significant response because it could launch a debate about the depiction of the Holocaust. The Hungarian Film Union, noting that the film was made with support from the Hungarian National Film Fund, said it is about a fictitious character of the Sonderkommando whose members were forced to collect and cremate bodies from gas chambers and spray their ashes. Nemes Jeles, 38, said he was very pleased about the invitation. He had not wanted to make a “classic historical film drama” but focused on one man’s perspective of the camp, as if shown “through a keyhole”. He said he found most Holocaust films frustrating because they focus on survival, yet very few had a chance for survival in reality.