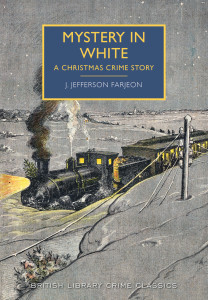 The British Library receives a copy of every publication produced in the UK and Ireland, and by now has well over 150 million items, in most known languages. Three million new items are added every year, including manuscripts, maps, newspapers, magazines, prints and drawings, music scores and patents. All this requires over 625 kilometres of shelves, and grows by 12 kilometres every year. At five items a day, it would take over 80,000 years to see the lot.

Naturally, books go in and out of print. Imagine some of the lost gems. A dozen or so forgotten titles have been republished in the British Library Crime Classics series, including this Christmas mystery back in print for the first time since its publication in 1937. Other titles include “A Scream in Soho” by John G. Brandon, “Murder in Piccadilly” by Charles Kingston, “The Sussex Downs Murder” by John Bude and “The Hog’s Back Mystery” by Freeman Wills Crofts.
J. Jefferson Farjeon (1883–1955) was the author of more than 60 crime and thriller novels. His work was acclaimed in his day; Dorothy L. Sayers wrote that he “is quite unsurpassed for creepy skill in mysterious adventures”. Farjeon is now best known as the author of “Number Seventeen”, a play that was adapted for the cinema by Alfred Hitchcock (an early effort by the director and quite possibly his worst film, though we won’t blame that on Farjeon).
“Mystery in White” is a typical rather genteel whodunit of British crime fiction, where the corpses don’t seem to bleed or smell much and with an ambience closer to Ms Christie than the gangster-packed novels of Chandler and Hammett or the later blacker works of James Ellroy and Lawrence Block.
The story opens on Christmas Eve. A train is stranded in the countryside by a terrific blizzard that shows no sign of abating. A charmingly ill-assorted bunch of characters quite unknown to each other are suddenly thrown together. There is a shy clerk, a man who turns out to be a psychic investigator, an elderly bore with his eye on a pretty chorus girl, and a young brother and sister who bicker pleasantly. Later a strange cockney keeps appearing, disappearing and popping up again.
As the snow piles up, the trapped passengers agree to leave the safety of the carriage and seek a nearby village, although visibility is almost nil. After a near-disastrous journey on foot in awful conditions, they luckily find a country house with an unlocked front door.
The house is deserted but the table is laid for tea, a fire blazes in the grate and the larder is stocked. Shades of Marie Celeste. The eyes of a portrait on a wall seem to follow them around the room. Exploration of the house reveals a locked door and a slight noise behind it; later the door is unlocked and the room empty.
The group has little choice but to make use of the food and shelter and offer to pay the mysterious owner if he or she turns up. Things get more and more puzzling. A murder turns out to have taken place on the train, and later another body is discovered in the snow. Various people try to get out and look for help but are always driven back by the conditions.
A knife and a hammer are found, ominously. Mysterious footprints appear in the snow. There is an unexplained horrible scream.  A 20-year-old event is uncovered and also appears to have been a murder.
One of the group runs a high temperature and starts hallucinating. Another seems to have some kind of psychic sensitivity and appears to be picking up evidence that one or more horrid crimes have been committed in the house. The psychic investigator, who may or may not have seen a ghost, finds her intuitions entirely believable, and indeed the solution to the puzzle, and to the murders, does seem to demand some kind of supernatural explanation.
Or does it? “Mystery in White” is not exactly a ghost story but there certainly is a rather creepy element, though it’s handled lightly with plenty of wit and left up to the reader to decide.
“The horror on the train, great though it may turn out to be, will not compare with the horror that exists here, in this house,” readers are warned in the blurb.