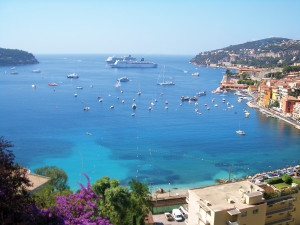 Choice is freedom, they say, and it’s definitely applicable to holidays – even if freedom is not to be confused with “free”. Today, international travel choices are almost endless and at least more affordable than, say, 10 years ago. The Budapest Times presents five appealing summer destinations around Europe, through the eyes of intrepid traveller and writer Andrew L. Urban. This week, he’s in Villefranche, in the south of France.

It’s the most popular cruise ship destination in the Mediterranean, but by drink o’clock, Villefranche is all ours.  We sip our pastis (in Ricard-branded glasses) at a small pavement table outside Gaga’s Bar, rustic and small, in rue du Poilu. The clientele is also rustic and small – in number at least, some still in their paint-spattered overalls.
All the locals are friendly, as we had already discovered. On our first visit (we’ve been twice), we opened the door to our room to find a vase of flowers and a card on the little table by the French doors to the corner balcony overlooking the bay of Villefranche. What made this special was that the flowers had been handpicked from the hotel’s garden by the manageress for our arrival, to go with the special Mother’s Day card she had printed out – from our daughter’s thoughtful email.
It was an appropriate introduction to Hotel Provencal, whose charm is greater than its modest two-star rating might indicate and is matched by its location at 4 Avenue Marechal Joffre, up the hill from the waterfront. We stocked up on fresh fruit, baguettes, cheese and wine, for a picnic with a view on our little balcony facing the beautiful bay.
Minutes by train from Nice or Monte Carlo, Villefranche-sur-Mer (to give it its full official name) is unique on the Cote d’Azure with the charm of a small port, the glory of the Mediterranean, the glamour of the Riviera – and a relaxed pace. Tucked away on a gorgeous bay, the town has a colourful history and a sparkling present.
Small, but Villefranche is not short of restaurants: the quay is lined with a variety of cuisines at various prices, all along the cobbled Quai de l’Amiral, which has served the waterfront of this medieval port for centuries. But our favourite eatery turned out to be Le Cosmo Bar and Restaurant, set slightly back from the Quai de l’Amiral, with its relaxed atmosphere and great food making up for the lack of a view to the port.
You can pay a lot more at places such as Mere Germaine or La Fille du Pecheur but we kept returning to Le Cosmo, which had enough variety on the menu to keep us satisfied – until we found La Caravelle, hidden up one of the lanes running down to the waterfront. A skull and crossbones hangs at the back and the husband/waiter/owner wears a gold ring in his left ear, but the prices do not raid your wallet: their excellent fish soup (the brown variety served along the entire south coast) is just EUR 10, compared to EUR 27 at Mere Germaine.
These places soon became even handier to us when we moved into La Belle Vue apartment, around the snake bend and up the hill a few steps from Le Cosmo, in a commanding position overlooking the bay. La Belle Vue is the penthouse of a duplex that boasts spectacular views through a set of six archways in the living area, three along each of two walls forming an L. 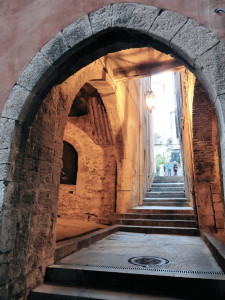 Warning: when you open the floor-to-ceiling sliding-glass doors and slump onto the day bed, a local rosé by your side, nothing seems worth getting up for. The view takes in the port, the large natural harbour and across the other side to the peninsula of Saint Jean Cap Ferrat.
We paid one euro for the bus to the Cap, for a view back towards Villefranche. On the way we passed along the road above the famous Villa Nellcôte, where the Rolling Stones spent some chaotic weeks in 1971 recording their legendary “Exile on Main Street” album. The mansion is mysteriously closed, its large wrought-iron gates padlocked as if to lock away those memories.
Villefranche – its own memories going back as far as the 13th century – has a number of remarkable features, not least the Rue Obscure, an ancient underground laneway hidden among the narrow backstreets that run above the quay.
Looking up the hill from our apartment we could see the lovely old (surprisingly large) St Michel church – and down towards the (surprisingly small) Chapel St Pierre, famous for its wall-to-wall interior artwork by French Renaissance artist Jean Cocteau, (1889-1963).
One late afternoon we heard the infectious and seductively rhythmic sounds of a Latin street band just out of sight from the apartment; a two-minute walk took us into the small square opposite the Chapel St Pierre, where the band was getting it on – and the instant crowd was dancing to the irresistible beat.
We crossed the road to the terrace of a small waterfront restaurant to sit and watch and listen – and to enjoy their watermelon mojitos.
Villefranche

Getting there
Air France, Austrian, Lufthansa, KLM and Swiss International fly several times a day between Budapest and Nice (nearest airport), none direct; return fares range from about HUF 70,000.