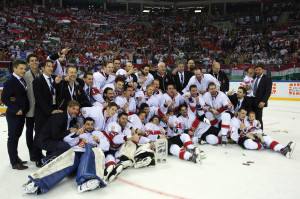 The Hungarian national ice hockey team has accomplished what only two other Hungarian teams have done over the past 75 years – to qualify for a top-flight international tournament. A tense and hard-fought 2-1 victory over host Poland on the final day of competition was enough for the Hungarian side to claim one of the two available spots in next year’s IIHF World Hockey Championships in Moscow and St. Petersburg, Russia.

The 2016 team will join the 1964 Hungarian Olympic team and the 2009 World Championship team as the only Hungarian teams to qualify for a premier international ice hockey tournament since the Second World War. Now the team will set out to do what no team has done since February 1939, when they defeated a Belgium squad in a tournament featuring a Nazi German squad – win a game at a top-flight event.
In the process of qualifying last week, the Hungarians broke two frustrating trends: the six-year cycle of only four teams winning promotion (Austria, Italy, Kazakhstan and Slovenia), and the team’s own four-year cycle of finishing third – just one spot outside of promotion.

Trend busters: After five years of having the same four teams get promoted and relegated (Austria and Slovenia in even years, Italy and Kazakhstan in odd years), and after four straight tournaments of missing promotion by one place, Hungary has finally broken both cycles.

The experienced Hungarian side began the tournament nervously, having to battle from behind to defeat a Japanese side that wouldn’t be safe from relegation until a final-day victory over Ukraine. A late power play goal by former Canadian National Hockey League player and junior scoring phenomenon Frank Banham ensured that the team secured the important three-point regulation victory.
The Hungarians were taught a lesson in what they can expect next year at the Elite Division when Kazakhstan – clearly the finest team in the tournament – schooled the Magyars with a dominating 5-0 win in a game that saw the Hungarians record only 12 shots on goal.
The Kazakh side featured the top five tournament scorers and four players voted to the tournament all-star team, including tournament leading scorer and most valuable player Roman Starchenko. However, a loss to the powerful Kazakhs would not prove to be detrimental if the Hungarians could find form in the remainder of the tournament.

Just in time: Recently naturalised forward Canada’s Andrew Saraurer played an integral role for the team. His six points (two goals, four assists) in five games led the Hungarian team and earned him a position on the tournament’s All-Star team.

The pivotal game of the tournament for Hungary came in the third round against Italy – a team that had qualified for the Elite Division their last three tries and a team that the Hungarians hadn’t defeated since Jimmy Carter and Leonid Brezhnev were in office (1978).
Wearing their white and red jerseys, the Hungarians jumped out to an early 2-0 lead on the way to a convincing 4-1 victory that saw the team limit the Italians to only 11 shots on goal.
A win against an underperforming Ukrainian team would put Hungary in the driver’s seat for promotion during the final day of the tournament, and the boys in red and green didn’t disappoint.
Despite falling behind 2-0, the Hungarians notched up four straight goals to set up a match with host Poland to determine which side would qualify for next year’s World Championships in Russia. The team was led by recently naturalised Canadian Andrew Saraurer, who notched two goals and an assist in the comeback victory. 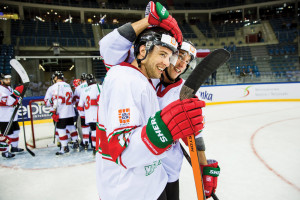 The showdown versus Poland

The match-up against the hosts looked good for the Magyars on paper: Poland was the lowest-ranked team heading into the tournament and hadn’t been ranked higher than Hungary in the IIHF rankings since 2007; the Poles had to win promotion from Division 1B last year in Vilnius, Lithuania, just to qualify for this year’s event, and winning back-to-back promotions is exceedingly difficult and rare; and the Poles hadn’t defeated a Hungarian team since a 3-1 win 12 years ago.
Needing just to get to overtime to win promotion, and buoyed by up to 4000 noisy and supportive Hungarian fans, the team played two tentative scoreless periods. The competing chants from each side’s fans gave the event a circus atmosphere not unlike an important football match; however no matter the noise level, the nerves in the stadium were palpable – apparent among both fans and players.
Early in the final period the Hungarians were able to break through, as Janos Hari scored with a beautiful shot on a rebound. Needing to score two to win promotion, Poland bravely pulled their netminder – tournament goaltending MVP Przemyslaw Odrobny – with over four minutes remaining.
The Poles were able to get one back but after pushing for the winning goal gave up a long, empty net game-winning goal to Bence Sziranyi. Shortly afterwards, the team mobbed each other and played it up for their delirious supporters.
The enjoyment and sense of accomplishment among the Hungarian players and coaches was clear as the team stayed on the ice for over an hour after the game to celebrate with each other and their fans.

What to expect in Russia

While winning promotion is a major accomplishment for a nation that has not seen much success in international ice hockey, it’s only the beginning. The next step for Hungary will be to win a game and avoid relegation.
Hungary has only competed twice at the Elite Division since 1939: the team went 0-7 at the 1964 Winter Olympics in Innsbruck, Austria, and 0-6 at the 2009 World Championships in Bern and Zurich, Switzerland.
“It’s going to be a totally different world next year,” said head coach Rich Chernomaz. It remains to be seen if veterans such as 35-year-old captain Marton Vas or 40-year-old sniper Frank Banham will return next season. Vas says he plans to try out for the team; Banham says it depends on the health of his knee, on which he’ll have surgery next week.
Either way, there is an entire year to worry about finding some success in the Elite Division. For now, it’s time to savour a wonderful achievement from the Hungarian national ice hockey team. To the boys in Krakow: congratulations on your wonderful accomplishment.