The issue of whether to restore capital punishment should “stay on the agenda”, Prime Minister Viktor Orbán has said in Pécs. Hungary’s passing a “three-strikes” law and actual life imprisonment had not been sufficient to deter criminals, Orbán said. His words caused quite a controversy and later, when on the phone with European Parliament president Martin Schulz, he softened his stance, saying that Hungary actually has no plans to introduce the death penalty.

Capital punishment has been used in almost every part of the world but many countries have since abolished it. The use of capital punishment is usually divided into the following four categories. As of March 2015, of the 195 independent states that are United Nations members or have UN observer status: 103 (blue) have abolished it for all crimes; 6 (green) have abolished but retain it for exceptional or special circumstances (such as crimes committed in wartime); 50 (brown) retain but have not used it for at least 10 years or are under a moratorium; 36 (red) retain it in both law and practice.

The issue “is only a matter up for debate”, he told Schulz. Cabinet chief János Lázár said the two men had discussed the matter over the phone. Lázár said Orbán had also told European People’s Party leader Joseph Daul and group leader Manfred Weber that a debate is ongoing in Hungary about the death penalty but European Union laws will be respected.
Lázár repeated Orban’s comments about the recent murder of a shop assistant in Kaposvár, stating that the introduction of the “three-strikes” law and real life sentences did not have sufficient effect to prevent crime, and therefore the death penalty should be “kept on the agenda”.
“The unbelievable social outcry that has emerged in connection with serious crimes might not be heard in Brussels but it is heard in Budapest,” Lázár added. Hungary respects the EU legal system but the EU in turn, as an important guardian of democracy, should not reject any debate that concerns its citizens, he said.
A day later Orbán told commercial Echo TV that a decision on the death penalty was premature but the debate should continue. He said the loud critical response from Brussels showed that “some people in Brussels do not want to allow debate”.

The leftist opposition Democratic Coalition said Orbán had taken up the topic as a gesture to radical nationalist party Jobbik, “sinking morally even deeper” in the process. Not only does the death penalty not exist in the European Union but it does not in a single European country either, Csaba Molnár, the party’s deputy leader, said.
The Együtt party said that “in pursuit of a petty political gain”, Orbán had become “more Jobbik than Jobbik” and was making ever more extreme statements in a bid to restore his popularity. Együtt said the prime minister should be aware that such a move as restoring the death penalty would have unforeseeable international legal consequences, and in effect would mean Hungary being excluded from the EU.
The Dialogue for Hungary (PM) party called on Orbán to drop his “cynical game” of “stealing Jobbik’s lunatic ideas”.
Antal Rogán, head of Fidesz’s parliamentary group, said the debate was legitimate because the Hungarian public “has never had the chance to decide about this”. Rogán said the recent murder of a young tobacconist for “a mere 22,000 forints” is exactly the kind of thing that “automatically makes one think that this warrants a death penalty”. 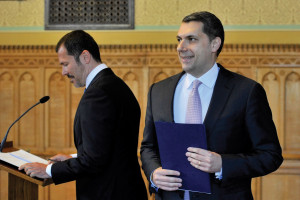 Lázár: Hungary
respects the EU legal system but the EU,
in turn, should not
reject any debate that concerns its citizens

The co-ruling Christian Democrats (KDNP) do not support restoring the death penalty, Bence Rétvári, the party’s deputy leader, said. KDNP welcomed that the criminal code had been made stricter over the past five years, including the introduction of the “three-strikes” law, and would support further tightening, he said. Rétvári, who is also state secretary at the Ministry of Human Resources, said Christians and the Church believed that “life is given by God and no man can take it away. Everyone should be given a chance to feel remorse for their sins”.
Political analysts polled on the issue agreed that a debate on capital punishment could be useful, and politically it would be a mistake to reject it. Asked if the death penalty were a taboo subject in the EU, Tibor Attila Nagy, analyst at Méltányosság, told public Kossuth Rádió that EU treaties and human rights charters prohibit it. But the far right in France was addressing the issue after the recent terrorist attacks in Paris.
Tamás Lánczi, head analyst at Századvég, said: “Elites try to avoid this subject because they don’t have a strong position and they would have to go against their voters. Elites oppose, the average European supports the death penalty.”
However, Nagy said the debate could be counter-productive if voters realise that Hungarian and international laws do not allow the restoration of the death sentence. He added that if a debate does go ahead, it could be in Parliament or some other forum. “It could work for Fidesz to divert attention from other issues and take some wind out of Jobbik’s sail,” he said.

Radical nationalist Jobbik – a long-time supporter of capital punishment – has repeatedly called for a public debate and a national referendum on the issue, party leader Gábor Vona told public TV news channel M1.
Although a Roman Catholic, he would say “yes” to restoring capital punishment in a referendum, he said. “It must be decided what is more important: a couple of international agreements or the life of Hungarian people,” Vona said. “This would not mean abandoning the EU but that the whole issue should be addressed on a European level.”
He insisted the prime minister was not putting forward the issue seriously, adding that Orbán seems to have concluded from a recent by-election win by Jobbik that Fidesz should steal its ideas.
Jobbik will initiate a day of debate in Parliament, Vona said, adding that international treaties do not ban the death penalty but there are even some members of Jobbik who oppose it. He called the death penalty “justifiable”, citing brutal murders as examples where it would be a just punishment.

The age threshold for life sentences should be reduced from 20 to 18 years,
radical nationalist Jobbik said, proposing a change to the penal code. A professional and social debate is needed, deputy party leader István Apáti said. International treaties should be amended so that judges can hand out life sentences in extreme murder cases to perpetrators aged 18 and above at the time the crime was committed, he said, referring to the recent murderer of a shop assistant in a tobacconist’s who was below the age of 20. The prisoner would qualify for release after 14 years behind bars. Jobbik MP Balázs Ander said tobacconists who remove the foil from their shop windows to make the interior visible from the street should not be fined.