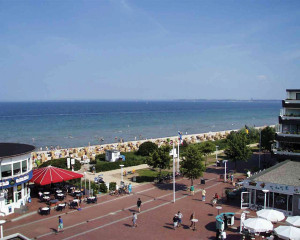 Choice is freedom, they say, and it’s definitely applicable to holidays – even if freedomis not to be confused with “free”. Today, international travel choices are almost endless and at least more affordable than, say, 10 years ago. The Budapest Times presents five appealing summer destinations around Europe, through the eyes of intrepid traveller and writer Andrew L. Urban. This week, he’s in the German seaside resort of Scharbeutz, on the Baltic Sea.

My Sunday brunch at Scharbeutz on the shore of the Baltic Sea is a superb Bismarck herring sandwich, served with onion rings and a crisp lettuce leaf in a fresh bread roll, washed down with a sharp lager. The café we have chosen has open views to the north-east across the flat, grey-blue Baltic, past the coast of southern Denmark towards Sweden, a couple of hundred kilometres across the water (335 kilometres by road and ferry). A calming view.
It’s spring. At 11am the place is almost empty but by lunchtime it’s comfortably crowded, people filling the beachside cafés, window shopping along the archetypal holiday resort shopping strip. The newly opened (April 2014) Bayside, a multi-storey hotel on the beach, would have been called the Scharbeutz Grand, had it been built when they built hotels grand. There is in fact a “Gran” hotel, the Belveder, which is a bit older than the Bayside, and a bit grander to look at, two kilometres up the beach.

Even though it’s a cool 16 C on the day of our visit, visitors from as far as Hamburg, 83 kilometres away, are looking for parking spots along the road above the beach, or jamming their vehicles into parking bays in one of the two large, open-air car parks a block back. Out come the strollers and toddlers, the dogs and the wheelchairs.
The sun slips behind the clouds – again – as I finish my lager and button up my windcheater. But to North Germans it’s officially Spring with a capital S, and not even the cool wind will stop them celebrating it; sunshine – even if fleeting – is treasured here.
Rugged up, they lie in the wicker shelters (cosy for two) that stand like some alien pods all along the long, flat beach of the Baltic, its waves measured in millimetres, the water clear and expansive. Nothing on the surface for 15 kilometres, across to Neustadt (the smaller one, on the northern coast, with its unexpected pagoda house on the waterfront), where a few yachts move slowly in the cool, light breeze.
Scharbeutz has an impressive beach, a long, wide crescent, much bigger than the famous one at Cannes, the sand fine. And in the middle of summer (July and August), when the temperature regularly reaches 25 C and the sun doesn’t set until almost 9pm, the beach is just as crowded, the view across the Baltic just as expansive.

Souvenir shops and eateries (and a couple of stalls selling good fagyi) dominate all along the promenade, and an attractive bar with outdoor seating marks the entrance to the long Scharbeutz jetty, where dog-walking owners mingle with scuba-diving students and couples on a Sunday stroll.
Standing alone on the vast expanse of beach, my brother Tim (a sun-starved Hamburg resident), realises he has lost his mobile phone and we run back to the car park, retracing our steps, searching in vain. In desperation, he calls in on a beachside stall just opened for business (selling wurst and sauerkraut, surprise!) and returns triumphantly. Someone had found it in the sand nearby and handed it in to the lady vendor. This is definitely not your average seaside resort.
Scharbeutz itself has been gentrified, one could say, with holiday homes and apartments jostling for prime position. Larger private homes stand out in prime locations and the atmosphere is definitely relaxed.