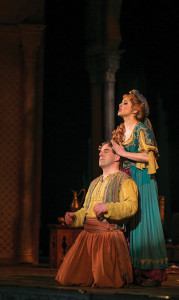 Comedy; this is a word that never rests easy with me. It means laughter, happy endings and feel-good factors. I crave the dark, the tormented and the sadness. But I have to swallow the sweetness with the jagged pill at times. So I am reviewing a comedy. How bad can it really be?

I have to be honest. My reviews of Hungarian State Opera so far have been glowing and the absence of theatre criticism is prevalent. I am a theatre critic and I have not criticised. However, I cannot hold back over this one.
Firstly, the opera is light-hearted and comic throughout. There is no depth of character or the darker emotions that Mozart displays in his later operas. I thought I had mistakenly wandered into a children’s pantomime, only it was the wrong season despite the rain-lashed streets outside. Throughout comedy there should always be a dark undertone running just beneath the surface, and there was none of this.
The use of Hungarian over German for the opera lost much of the original meaning of Mozart’s arias, which he composed and tailored for specific singers and their strengths. In the German language.
As the opera is in the genre of “Singspiel”, most of the action on stage is progressed by spoken dialogue and the music lacks recitatives. This blending of dialogue and singing may be popular amongst the masses but it affects the beautiful musical flow of an opera.
It is the effective dumbing down of opera to make it appealing to a pantomime audience or to children. Yes, I know everyone else enjoyed it and I didn’t and it had nothing to do with the language barrier of Hungarian.
Maybe I am too much of a traditionalist but this is not and will never be opera for me.
I can’t criticise the performances, which were flawless within the constraints of the genre itself. The costumes were colourful, the setting and stage composition well-considered but this is one opera I would not want to sit through again. And Hungarian surtitles are enough. The opera should be in German as the composer intended. It is like “Carmen” in English; it simply does not work.
And to increase appeal to a wider audience, the programmes should always be bilingual, the surtitles always bilingual. Yes, this is Hungary and the Hungarian language should rightly have priority, but to limit the language solely to Hungarian is to exclude everyone else. It is the equivalent of the Welsh National Opera using the  highly complex  and exclusive Welsh language for programmes and surtitles. The company would lose a third of the audience within a week.
However well you are immersed in the opera, however many times you have seen it, there are always new interpretations, and the language of opera is so poetic at times and so rich in meaning that  providing English as a secondary to Hungarian or Welsh or whatever language of the country it is performed in, is essential.
In essence, it is a love story stuffed to the hilt with comic interludes. Belmonte is looking for his love, Konstanze, who along with her servant Blonde is in the hands of pirates having been sold to Pasha Salim. Osim the Pasha’s servant ignores Belmonte when he asks him about Pedrillo, Belmonte’s servant, who is also being held prisoner. 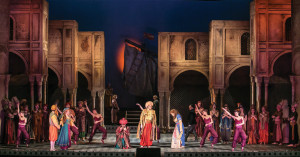 Belmonte is insulted by Osim, who says he will have him killed. Belmonte is reunited with Pedrillo and together they plan to free Konstanze and Blonde.
Pasha Salim meanwhile is trying hopelessly to win Konstanze’s love and Konstanze confides in Blonde that Salim is demanding he use force to obtain her love. Pedrillo approaches Blonde, who is his sweetheart, and says Belmonte will rescue them.
Belmonte and Pedrillo come to the garden with ladders but are caught by Osmin. Belmonte pleads for their lives to be spared but Pasha longs to murder him because Belmonte is the son of one of his enemies. He instructs Belmonte and Konstanze to say goodbye but decides at the end to release them all to the dismay of Osmin, who wanted to see them all killed.
And there you have it. Opera for the masses. Mozart intended this when he composed it but this is pure pantomime with a peppering of opera thrown in. One for the children.