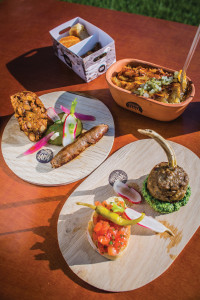 Pentecost is a predestinated occasion for enjoying great food. So why not make it a public event? Gourmet Festival is doing just that and thus will serve new tastes while still remembering the good old Hungarian classics – such as chicken paprikash (“paprikás csirke” in Hungarian), the festival’s theme this time around.

Even though it doesn’t appear as the usual festival event with camping, crowd-surfing and all that craziness included, Gourmet Festival is organised by the same office responsible for Sziget Festival, which shouldn’t be a surprise for those who know the name Károly Gerendai.
The co-founder of Sziget is known to be passionate about good food: Gerendai owns Costes Restaurant, which is one of the four Hungarian restaurants holding a Michelin star. With the Gourmet Festivals he aims for an event that presents not only the gastro culture and the best food of Hungary but also their creators – the chefs.
Every year the festival features a Hungarian dish that is presented on-site by several cooks. Two years ago it was goulash and last year potato casserole (“rakott krumpli”). This year chicken paprikash is in the spotlight during Gourmet Festival, held on Pentecost weekend, May 21-24.
The chicken dish is one of Hungary’s most popular ones made with paprika, the spice commonly used in the national cuisine. Imagine trying this simple but oh-so-delicious dish prepared in different variants by top chefs.

But Gourmet Festival isn’t only about Hungary – it also hosts international cuisine. Gourmet cooks from abroad will show their talent on the gastro stage, where non-stop food and drink tastings will happen. Moreover, visitors who love to cook themselves shouldn’t forget to bring their notebooks: Gourmet Festival is known for its cooking shows, where one can nick all the tricks needed for adding that certain something to a dish.
In addition, the most outstanding restaurants, wineries and confectionaries from Budapest and the countryside will be there plus other important members of the Hungarian gastro world to exhibit all their tasteful treats.
Another important feature of the food festival is its up-to-dateness. The organisers are well aware of nowadays’ importance of fast and street food, some of it even being on the same level of quality as that served in fine-dining restaurants. That’s why they invited famous Hungarian food bloggers to last year’s event to discuss the current trend.
This year barbecuing and grilling will play an important role in the street food category. Among others, chefs will reveal their recommendations for making the perfect BBQ and explain why slow cooking over smoke is one of the noblest philosophies for the creation of food.
For the first time in the history of Gourmet Festival there will be a so-called Bocuse d’Or Academy. At this new venue visitors can taste the five-course menu of the Hungarian restaurants presented by the Hungarian stand at the prestigious biennial world chef championship, the Bocuse d’Or, which took place in Lyon this January.