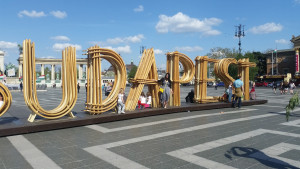 I started this article series with the intention to come to some sort of realisation of who I am – to know what and why my Hungarian roots are so important to me. Since then I have thought about this a lot but, as with everything else during my stay here, it has been surprisingly hard to formulate a conclusion.

It has been almost two months since I arrived at the airport in Budapest and I have made the most of my stay. I have made many new good friends, learnt new things and seen parts of this town that have previously been inaccessible to me. I have broadened my view of Budapest culturally, historically and geographically.
One of the most important things for me was to learn the language better, and I’m glad to say that I have done that with great results. Every day I learn new things and my understanding of the Hungarian people and the Hungarian mentality has greatly increased. However, at the same time I have come face to face with the many differences between Hungary and Sweden.
Of course this is not the first time I have been slapped with a big dose of culture shock, but this is the first time I have been subjected to it for more than two weeks at a go. Many things I have encountered have been positive but there have also been negative things. One that bothers me the most is the difference in the social security system. In Sweden we rarely see people sleeping on the streets. I find the level of poverty I have seen in some places in Budapest very upsetting. It is simply not the norm for me and it has been one of the hardest things to deal with during my stay.
A defining moment for me during this adventure was when I was walking around town and some tourists asked me for directions. Not only could I guide them without problems but I also felt a divide between them and I. That was when I realised I had stopped thinking about myself as a tourist or a visitor and finally started considering myself as one of the locals. Even though I have been coming to Hungary pretty much every year since I was born, that was the first time I actually felt like I belonged here and that I wasn’t just a visitor. It was a funny feeling but also much appreciated and anticipated.
As time goes by I must come to terms with the fact that I will soon be going back to Sweden. I must admit that I miss home and my everyday responsibilities but at the same time I will be very sad to leave this country. When I came here two months ago I was comparing everything to Sweden – my point of reference. Now, when I go back, Hungary and Budapest will be my new point of reference.
Thanks to this experience I have a new set of eyes to look at the world with. A lot of this is thanks to the people I have met from around the world. It has been wonderful to make – hopefully – lasting friendships. These people, both Hungarian and internationals, have been key to making my experience here into more than just a memory. I am sure that this will be an ongoing adventure that will develop over the years. After all, I’m coming back to Budapest in the summer already.
In the first part of this article series I was thinking about my heritage – about who I am. Swedish, Hungarian or both? I thought the answer was going to be clear after a month or two. But actually i am no closer to the answer now than I was in the beginning. If anything, I’m more confused now. There are parts of me that never wanna leave this country and this city, then there are parts that miss Sweden and all that is familiar, like crazy.
I am not prepared to choose one country before the other. They are both a part of me and they complete each other in a way that is very hard to explain. When I’m in Hungary the Swedish part of me becomes very prominent and vice-versa. It’s like one cannot exist without the other and that is what has finally become clear to me.
In a week or two I’m leaving Hungary behind for this time but the Hungarian spirit is always going to be with me like a shadow. And this realisation is something I find quite comforting.