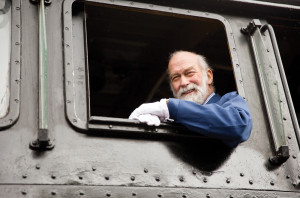 The Royal Waiting Room at Nyugati Railway Station probably hasn`t seen a blue-blood visitor in a century or so. It was built to keep the Habsburgs away from the herd, and perhaps from assassins too. Hidden behind a nondescript green double door alongside the platforms, it is almost always locked, unless someone hires it for a special occasion. Today, May 2, 2015, is one such moment. And what`s more, a real live royal is in attendance.

Enter His Royal Highness Prince Michael George Charles Franklin of Kent, Knight Grand Cross of the Royal Victorian Order, Knight of Justice of the Most Venerable Order of the Hospital of Saint John of Jerusalem (pictured left). Or, as he is more commonly known, Prince Michael of Kent. With him, his wife the Princess of Kent, who has a distinctive lineage of her own, aptly supplied by her Hungarian mother, Countess Maria Anna Carolina Franziska Walpurga Bernadette Szapáry von Muraszombath, Széchysziget und Szapár. 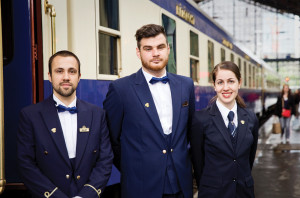 The prince and princess are due at 10.45am but arrive about 25 minutes late without apology, no doubt exercising a royal prerogative. They do not enter like everyone else through the platform portal, with its gold inscription “Viribvs Vnitis” (“With United Forces”) on the lintel, but instead use the back door, where their car can pull up.
The Royal Waiting Room is a splendid location but it is in a sorry state of disrepair, giving an aura of faded grandeur. It badly needs refurbishing, and until someone does so it will probably remain mostly closed. The prince and princess seem not to notice, but perhaps the thought arises among the assembled guests that such chipped woodwork, lustreless gilt, dusty fittings and frayed carpets would be unthinkable in the royal abode, London’s Kensington Palace, which they share with the Duke and Duchess of Cambridge, Prince Harry and the Dukes and Duchesses of Gloucester and Kent.
The royal couple are apparently chummy with Tim Littler, who is the president and founder of Golden Eagle Luxury Trains, which is based in Cheshire, UK, and calls itself the world’s leading operator of exclusive long-distance rail journeys. Golden Eagle will be operating various trips using steam engines and sumptuous sleeping carriages and restaurant cars provided by MÁV, the Hungarian state railway company.
Prince Michael is said to be something of a train buff who once described driving the steam-hauled Golden Eagle Trans-Siberian Express in Moscow as one of the most exciting moments in his life. He is here in Budapest to support and travel on the “Golden Eagle Danube Express”, which will make an overnight journey to Venice with about 40 guests and business partners of Littler and the royal couple.
The press, unfortunately, are not invited along and must content themselves with the opportunity to take a rare peek at the waiting room, ogle the considerable niceties of the train, drink a couple of glasses of champagne and enjoy a handshake and exchange a few words with His and Her Royal Highness (the latter suitably marking the occasion by wearing a light Hungarian-style Atilla jacket). 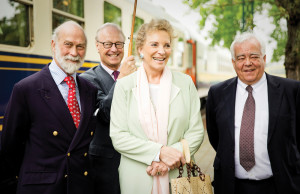 The royals with their private secretary (rear) and Tim Littler (right)

In a short speech, Prince Michael congratulates all concerned on the tremendous challenge of designing, building and operating a private train, adding that it is wonderful to see this strong Hungary-Great Britain link that has been forged in the process.
He adds that since trains and travel are two great passions of his wife and himself, he is much looking forward to the trip to Venice and he has every confidence that the experience will be shared in years to come by thousands of guests aboard the Danube Express.
Speech over, the royals proceed to the train while a Hungarian brass band in green jackets plays “God Save the Queen”, “Rule Britannia” and “Pomp and Circumstance” (or “Land of Soap and Water” as it is irreverently known). Donning a pair of white gloves, the prince takes the controls to help drive MÁV steam locomotive 424 247 to Budapest`s Railway Park and Museum (“Photographers are invited to picture His Royal Highness at the Railway Museum as he leans out of the window of the steam locomotive,” says the invitation to the press, who are invited on this short trip). There, despite a little rain, he gambols around happy as Larry for an hour or so among the vintage exhibits.
The trip to Venice will start a little later. Meanwhile the prince reveals that the engine driver stands up and has to push or pull 17 levers, all of which need to be in unison or there is no chance of momentum.
Golden Eagle train trips include the Treasures of Eastern Europe, Balkan Odyssey, Central Europe and Transylvania (this one from $10,195 all-inclusive, departs July 18), Jewels of Persia (from $13,595, departs September 4 and 17, October 6 and 29} (these four trips all involving Budapest), Trans-Siberian Express, Trans-Mongolian Express, Balkan Explorer (this one from $9,995, departs July 11), Swiss Rail Spectacular, Treasures of Anatolia and Persia, Arctic Explorer and Caspian Odyssey.
The Golden Eagle trains are indeed true luxury and they have a corresponding price tag but that`s what happens when you have signature touches such as Heritage or Deluxe en suite cabins, a champagne reception, a special Gala Caviar dinner (Persian trips), all meals, wine, beer and soft drinks, fully guided off-train excursions programme, porterage, arrival and departure transfers, the services of a tour manager, on-board doctor, cabin attendant, pianist and all gratuities. Hotel accommodation is five-star. Flights are extra.
The train is usually headed by steam for the arrivals and departures from Budapest, at other times by a gleaming red 1960s M61 diesel locomotive. There are eight newly refurbished cars in total: four deluxe en suite cars (with shower/WC), two classic sleeping cars, a restaurant car, lounge car and staff car, plus heritage presidential cars that can be added if required.
Now, locomotive 424 247 is ready for its run to Venice. This is a Hungarian Railways “Buffalo” Class 424 4-8-0 built in 1955. It is a big black beautiful beast, a huge and imposing chunk of incredible machinery, rather frightening even, as it breathes and belches black smoke and white steam before departure.
We wave farewell to the prince, the princess and their fellow passengers, not so much sorry that they are leaving but more that we are not going with them.
www.goldeneagleluxurytrains.com