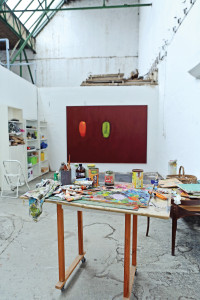 They become roommates each May again and again: this is when Dóra Juhász, Eszter Csurka, Levente Herman, Márta Kucsora and Sándor Szász move in to their studios in District XIII`s Budapest Art Factory. They also accommodate a sub-tenant each year until October, and this year it’s Frenchman Pascal Dombis. We visited the artists.

There is a turquoise box on the large wooden table in the kitchen and dining area. Pascal Dombis brought a souvenir for his new roommates: dozens of colourful macaroons, fresh from Paris. A bottle of red wine stands next to the box. They are talking, laughing, getting to know each other. 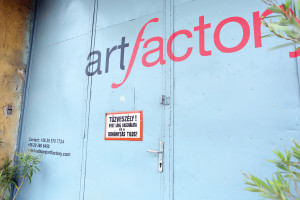 The 50-year-old artist has just moved in to Budapest Art Factory (BAF). He came to rent an artist’s residence, he is the first one this year. The BAF is only a temporary accommodation: five Hungarian artists live here each year from May to October, and from time to time they also accommodate an international guest artist for one or several months. In the other months of the year it would be simply too cold because there is no heating in the rooms.
The creative process itself – spiced up with a glass of wine here and there and the melancholic-beautiful guitar music of Levente Herman – should be enough to keep them warm, so they are already going for it. “The boys”, as the two male permanent residents, Herman and Sándor Szász, are referred to by “the girls”, begin to help the new roommate to move in right after the first introductory sentences.
Budapest Art Factory was founded in 2006 as a non-profit workshop and exhibition room by the artists themselves, following the initiative of Dianne C. Brown, a New York gallery owner. Juhász,  Csurka, Herman, Kucsora and Szász have been there from the very beginning – the five Hungarian artists met at the University of Applied Art. 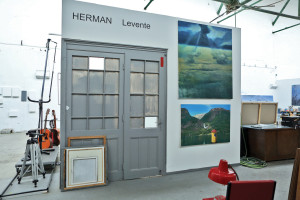 Now they are the permanent operators and inhabitants of the BAF, and they have been offering an artist residence program for the past two years. The art factory is financed by the artists working in it themselves and “a few silent investors”, as Kucsora explains.
Finances are not the favourite topic of the artists for sure. The scenery for their activities is a former turbine factory at the Forgách utca metro stop. You enter the Art Factory via a wooden staircase, which has an antique charm that appears rather threatening in the Budapest rain.
However, the climb is worth the risk: natural light comes in via the numerous glass windows of the industrial iron construction, the tall white walls prove to be ideal canvases for the artworks, and the small niches here and there allow the artists to draw back and work without having any doors standing in their way.
A huge star is hanging in a corner near the entrance with a few straps of brownish red material hanging on to it: “Yes, it’s that, the Red Star,” Kucsora says. The 36-year-old painter leads us through the rooms; her baby is sleeping in a stroller. “We just left the star to hang where it was and we did not remove the rags either. I always imagine that when the last piece of material will disappear from the metal frame of the star will be the time when all the remains of communism will disappear from Hungary.”

Working with diving goggles on 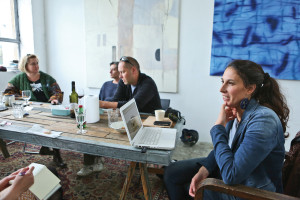 After the next corner we enter her workshop. There are many large canvases, some of them still empty and leaning against the wall, some already richly painted. There are some blue-coloured branches on the floor and a few leaves in a bucket. “I just get these from the park and I use them in my artwork,” the painter tells us.
Nature is the ever-present topic in Kucsora’s works. The colours and shapes remind us of water, mountains and plants; the movements that appear on the paintings are inspired by rushing waterfalls, windblown leaves and misty air.
“I have dealt a lot especially with the dynamics of water in my art; I wanted to try to transplant it on the canvas,” the artist born in Szeged describes her works. Not only the paintings themselves but the creation process itself is also very energetic and spontaneous. “I really like to create art. Mainly because I never know what will be the end result. Not everything is planned – many things simply happen.”
Sometimes there is something else flowing down under there and another drop of colour spotting here. When we spot the diving googles on her desks we can immediately tell: the creative process that Kucsora uses to accomplish her works is rather wild.
On the other hand, the works of Sándor Szász have a different approach, namely research and organisation but also dark prophecies and unspeakable nightmares. On one of the walls you find copies of large iron equipment ranging from weapons of war to nautical spare parts.
The painter from Transylvania depicts his pictures of apocalyptic scenes in muddy colour, while his son is hopping along merrily among his works drying on the canvases. “He is not very interested what his daddy is painting around here,” Szász says with a smile. “Our children are growing up naturally, surrounded by art. The parents of their kindergarten and school friends are maybe office workers or pastry chefs, and we are simply artists.”

Necessity is the mother of invention 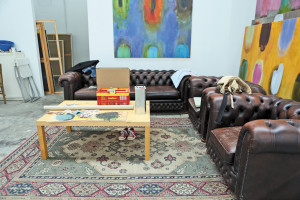 On the way to Herman’s two-part workshop – which is situated on the left and on the right of the hall and is the only one that has a bed – we meet the new roommate, digital artist Dombis, working on one of his creations. One of the two exhibition rooms in the Art Factory will be a small, narrow corridor for him, which separates the two large areas of the BAF from each other.
The hallway is the only dark workplace in the art factory, with most of the artists are usually happy about the abundant amount of natural light. “I think it’s great that I must set up my installation in this corridor – and `must` is really between quotation marks in this case,” the enthusiastic Parisian says.
What kind of corridor is this, Dombis ask himself the question, what kind of aims did it serve in its own time in the factory? The corridor is a place of transit and a kind of hindrance in one; it’s hard to cross it due to the low ceiling, however it still makes it possible to approach the two different rooms from both sides.
Dombis is a professional, his experienced eyes analyse the local conditions right away and they find a way to use them to his liking. The French guy will set up two surfaces, on which his film sequences will be playing; the works will be visible from both sides.
The next guest artist after Dombis will be a German man: Bernd Kirschner is coming at the end of June. Do such guests feel obliged to deliver as many works as possible during their stay?
“Maybe it is really motivating that they are only coming for a visit,” Kucsora says, “but we do not pressure anyone, there are no agreements about how many works a guest artist has to create.” Instead, everyone is allowed to work at his or her own pace, the permanent and the visiting artists alike.
Juhász adds: “We do not meddle into what the other one is doing.” They also avoid criticising each other. It seems that those days are over for the group of artists: no more large-scale experiments, only a quiet life in a workshop, which will never be boring though, thanks to the children and the guest artists.
It really has never happened so far that any of the artists have not got along. The common disputes in ordinary residential communities seem to be absent here. Despite all the harmony, isn’t there any competition between the artists? No again.
“Our art is too different, so there is no serious thought of competition arising here,” Juhász says. The behaviour of the “boys” and “girls” with each other affirms these statements clearly.  They share, help and work together instead of envying, questioning or turning down. A committed artist group is working in the Budapest Art Factory, who are held together not only by their similar profession.
Dombis immediately felt this when he arrived: “I did not need any transition time until I felt at home here. I arrived, they greeted me in a nice way and I could get to work immediately. This is all that I need.”