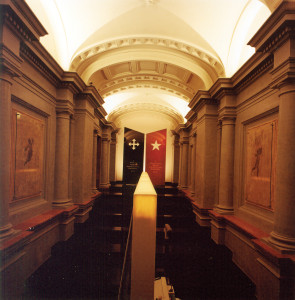 “Terror cast its shadow over daily life.” This is on one of the many printed sheets I collect in the museum, one of the most powerful sentences that speaks of suffering, of shame and betrayal without using a single picture.

  Like the reflection TERROR from the stencilled letters on the front of the
museum that appear in daylight, the shadow is always there; at times not visible
but like a sad spirit, ever-present. Even today there are those who do not want to remember and those who do not want to know.
Entering the museum, the two headstones to remember the double tragedy of the Nazi terrror and the communist terror stand inside the entrance in stark black and cruel red, the colours of darkness and danger. Despite the sunlight outside there is always a chill in this building, a feeling of sadness and suffering even before you take that slow elevator ride to the cellar below one of the most beautiful avenues in Budapest.
The video playing in the entrance to the ticket office has the immortal words “we can forgive but we can never forget”. Starting at the top of the building, winding downwards, as you pass along the balcony from each level is a Soviet tank and photos of victims on the wall that reflect in the oil  slick around the tank and seem to stretch into infinity like a dark mirror. The tank slowly seeps oil, a continuous silent fountain of never-ending black.
The museum charts the two terrible tragedies in Hungarian history; the Nazi brutality and the communist terror rule. The majority of the museum is devoted to the
latter because this lasted until 1989, and thus many more years than the Holocaust.
In 1944 the building was the headquarters of the Hungarian Nazis, then from 1944 to 1956 the communist terror groups the ÁVO and its successor the ÁVH were resident.
Between 1945 and 1948, the ÁVO interned 40,000 people and in 1950 there were four internment camps, based on the model of concentration camps where people performed hard labour in inhumane conditions. The overall aim of the workers in these camps was not production but humiliation and degradation. Although the labour service was dismantled in 1956, after the Uprising the communists re-opened several of the camps.
One of the most chilling legacies is the mistrust that still pervades Hungarian society; no one knew who to trust. Neighbours, friends, colleagues, even families informed on each other. A shadow army of informers infiltrated every aspect of life; in offices, universities, churches and theatres. No one could feel safe anywhere at any time.
In the years between 1945 and 1956, 50,000 people were brought before the courts on charges of sedition and 400 were executed. These were students who resisted the regime, peasants who could not keep up with the compulsory delivery of produce. The ones who defied the terror regime were
buried in unmarked graves because, even in death, they represented a threat.
The cellars were expanded into a labyrinth of connected rooms but as prisoners were separated from each other and blindfolded when taken around the building, no one who survived to recount the horrors of 60 Andrássy út could be sure exactly how many extra floors existed. When the House of Terror was rebuilt, although no signs of extra floors were found beneath the cellars,
it is probable that layers of the labyrinth were dug into the earth below and then covered up.
The prisoners were constantly kept under artificial light to disorient them so they lost sense of day and night. They were permanently cold, deprived of bedding and sometimes even oxygen, and given just 490 calories a day. Those who survived this and the interrogations and beatings were  moved on to other prisons.
Executions were carried out in the prisons in Vác and District X`s Kozma utca. People were not executed in the House of Terror but died from weeks of torture or suicide. 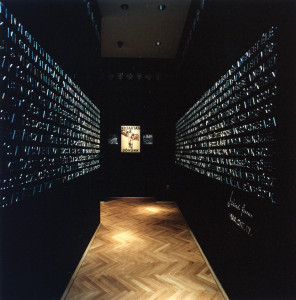 Emerging from the chill of the cells in the basement there is the Hall of Tears, lit by bulbs, names stencilled into the walls, names stretching on endlessly. The museum is especially moving because it was exactly where the horrors, the torture and killing took place on this “Champs-Elysées of Budapest”.
Of course, not everyone is so sensitive. What are all these bricks?A man asked me looking at the expanse of white blocks.
They represent the Hungarian Jews who died in the Holocaust, I told him.
But why do they all have the same surname?
Sertészsír.
It means pig fat, a double insult to the Jewish faith; they made people into blocks
of soap amongst other horrible treatments of the human body. Even after death people were violated by cremation, forbidden in the Jewish religion.
He looked at me mystified as his fingers tapped at the rubbery bricks.
But they have the same surname………
Ok, you are just not getting this.
A group of students laughed at the video playing in the elevator as we slowly descended to the prison cells and torture rooms. A man on the video is describing in Hungarian with English subtititles the process of execution.
What is wrong with people? What are you doing in this museum; you should have gone to the zoo instead.
Another group in a whine said to each other, “Say, you guys, is this like going to be
so depressing? It seems really depressing.”
What did you expect, a funfair?
It is not all like this. Some people are moved to tears, most leave the museum in stunned silence into the white sunlight. It is just like the anti-social person on your flight. You notice them and not the quiet respectful citizens.

We can forgive but we can never forget.