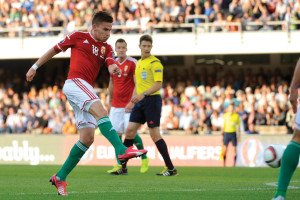 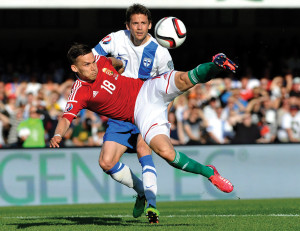 The Hungarian football team defeated Finland in Helsinki 1-0 to affirm its third place in Group F of the 2016 European Championship qualification. Hungary played better and had more chances throughout but it wasn‘t until the 82nd minute that Zoltán Stieber (pictured top as he scores the deciding goal) secured the victory.

The cabinet office has initiated a procedure to prevent Mihály Munkácsy‘s monumental painting “Golgotha” from being permanently removed from the country. “With the listing procedure, the government wants to keep this extraordinary work of our national painting in the Hungarian sphere of interest,” the national office in charge of oversight of cultural heritage has announced. “Naturally, the procedure will not prevent the owner of the painting from selling it, as its listing has no such purpose.” The painting will be listed temporarily until rules on a permanent listing are applied, it added. The owner, Imre Pákh, said earlier that he would have “Golgotha” removed from the Déri Museum in Debrecen because talks on the possible sale of the work to the state have fallen through. 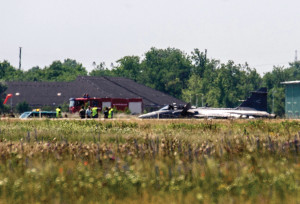 A pilot of a Hungarian Air Force Gripen fighter has carried out an emergency landing before ejecting (pictured). He had reported a technical fault on the JAS39 C fighter after take-off. The pilot was taken to hospital and preliminary examinations suggest that his rehabilitation could take a year. Three weeks earlier a Hungarian JAS-39 Gripen, participating in Czech-Hungarian-Swedish military exercise Lion Effort 2015, crashed off the runway at Caslav military air base in the Czech Republic.

The majority of Hungarians agree with the messages about migration the government has delivered in its billboard campaign, think-tank Századvég Foundation said on Tuesday. Fifty-nine percent of Századvég‘s sample of 1,000 adults agreed with the statement that migrants to Hungary must not take away jobs from Hungarians, while 85 percent supported the demand that migrants respect Hungarian laws. Further, 77 percent wanted migrants to respect Hungarian culture, according to the survey carried out last week. The latter two messages received approval independently of the respondent‘s political affiliation, while those rejecting the first message on jobs for the most part identified themselves as left wing, the think-tank said.

In light of a report in tabloid Blikk that devices containing classified data related to Paks nuclear power station had been stolen from a car parked in Budapest, the Socialist Party has demanded that the authorities brief parliament‘s national security committee. Zsolt Molnár, the committee‘s Socialist chairman, said that if indeed the theft occurred, information should be given about whether data had been handled correctly. The company that manages the power plant insists that the laptop has the most up-to-date hardware and software protections. Blikk said an MVM Paks II Zrt manager‘s laptop and several data storage devices were stolen. The data had related to plans for the expansion of Hungary‘s sole nuclear plant. Police are investigating. 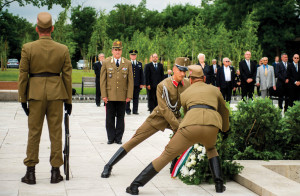 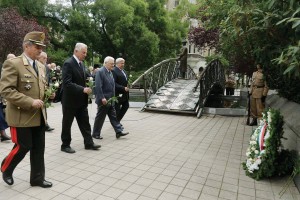 Politicians in tribute to Nagy

After 57 years, the example set by Hungary‘s martyred prime minister Imre Nagy “still demands our respect”, parliament‘s deputy speaker Gergely Gulyás of ruling party Fidesz said this week. Opposition Együtt party leader Viktor Szigetvári said Nagy chose the West in 1956 because he recognised that Hungary had no future in the East. “It is a shame that an opposition party in Hungary in 2015 needs to point this out as a relevant issue,” he added. June 16 marks the day when Nagy was executed in 1958. A ceremonial reburial in Heroes‘ Square in 1989 has become a symbolic event marking the end of communist rule in Hungary.

Banks in Hungary should brace for at least two more lean years before government measures ease and economic growth allows household lending to recover, Hungarian Banking Association head Mihály Patai has told Reuters. “We are in the middle of the seven biblical weak years but I don‘t yet see the rich years which are coming,” Patai said. “For the next two years I am prepared that this struggle will continue. Reconciliation will come but the road from the freedom fight that the government is having against the banking sector will be much longer and bumpier than I anticipated a couple of years ago.” Commenting on the National Bank of Hungary‘s recent decision to replace its main sterilisation instrument, two-week deposits, with three-month ones in a move to divert more liquidity into government securities, Patai said “one small part of this liquidity will leave the country, one third could go into loan origination and the majority of the money will go into government bonds”. 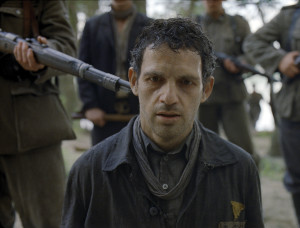 `Son of Saul’ up for Oscar

András Nemes Jeles’s film “Son of Saul” will represent Hungary in the competition for this year’s Academy Award in the best foreign language film category, after the National Film Fund‘s seven-strong jury, including Hungary‘s film commissioner Andrew Vajna, unanimously supported the nomination. “Son of Saul” recently won the Grand Prix and the International Federation of Film Critics prize at the 68th Cannes Film Festival. The last time a Hungarian film won the jury prize in Cannes was “Colonel Redl”, directed by Istvan Szabó, in 1985. The “Son of Saul” distribution rights have been sold to 48 countries so far, including the United States, Australia, South Korea and Japan. Initial potential foreign production partners all considered taking on the first-time director‘s project “too risky“, after which the National Film Fund stepped in to finance it. “Son of Saul” takes place at Auschwitz concentration camp and tells the story of Saul Auslaunder, a fictional Jewish member of the death camp‘s Sonderkommando charged with aiding with the disposal of gas chamber victims.