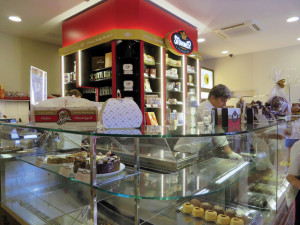 Of course I knew about the famous wines of Eger (who hasn’t heard of Bull’s Blood, aka Egri Bikavér?) and I knew about the historically important castle there … But I didn’t know about the chocolates. And chocolates are a big deal in my family, we start each day with one. It was my chocolate fancying in a supermarket checkout line, picking up a small dark chocolate truffle goodie, that led me to learn – on reading the label after the pleasure of tasting it – that Stühmer chocolates are made in Eger. Well, I said to myself, I was just planning a trip to Eger so the universe must be listening.

After the two-hour trip from Budapest the lovely Mrs Judit Bata of Stühmer meets me at the Eger railway station to drive me to the chocolate factory. Can anyone get a personal tour of Stühmer? Well not really, unless you are part of a group of 10 or more, or a school kid with your class. But frankly, notwithstanding the lovely cafe filled with a zillion tempting Stühmer chocolates, you don’t need to, unless you really want to see the slabs of marzipan being prepared or the chocolate hearts being poured and cooled, for instance.
It’s a boutique chocolate brand, just 40 staff making and distributing some 500 tonnes of the premium goodies every year. You can sample them in their shop in the centre of Eger, in the lively pedestrian mall of Szécsenyi street, which marks the valley floor on which Eger sits. You can also sample them in neighbouring countries and the Baltics, but boss Peter Csoll is now trying to build exports to other countries … Where competition is tough and the market crowded.
But the brand has a long and proud history, stretching back to 1868. All went very well until the incoming communists nationalised the company in 1948, the family fled and the brand withered. Until 2006 when Scholl (a successful expat cable operator in the US at the time) picked it up and with the help of a few old hands, not least confectionary master Béla Borbej, he relaunched the brand, using as many of the original recipes as possible. Borbej (in his 80s) still supervises the output ….
As I leave, Judit hands me some samples in a red chocolate cooler box, ensuring the goodies won`t melt in the summer heat. I didn’t want to tell her they wouldn’t have time to melt! 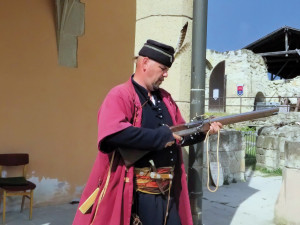 There are over 20 wineries in the region, most of them on the tourist route in Szépasszony (pretty woman) valley. But I have been recommended by a Budapest wine buff to go and visit the Kovács Nimród cellars in Eger itself, at 66 Veröszala street, just a lane which used to have several small wineries, now gone, though their cellars remain in the cool limestone earth below.
Mr Kovacs is not a winemaker. He doesn’t actually touch the grapes even. He is a businessman but he knows his business, which is why he has the good humoured and seriously well informed wine man Kent (everyone knows him as just Kent) as his special adviser, flying him out three or four times a year from California to work with the winemakers, check, probe and suggest … He loves it.
Standing in the elegant underground cellar tasting room adjacent to the large dining room, Kent explains why the Bull’s Blood (Bikavér) brand is world famous. “First you have to understand that the old world cuvees evolved in style alongside the local cuisines and Bikavér compliments many foods.” The regulations for making it are strict, and there are various quality levels. Kent says he works within these guidelines to make the classic as well as the premium versions, the former using three or so varieties of grape, the latter five or six.
“I would liken a premium Bikavér to a grand cru Burgundy,” he says as we taste one. The Kovács Nimród version is marketed under the Rhapsody label, partly because during the bad old Communist days when the brand was trashed by poor quality wines in large quantities, Bikavér lost its lustre. My palate tells me Rhapsody, from the winemaker’s Monopole series, is helping to regain it. 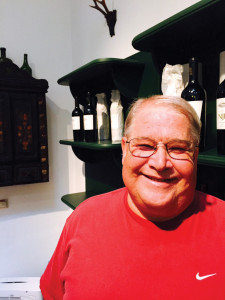 The best way to really get into this wine is the annual Bulls Blood festival held in the second week of July.
As for their Battonage 2012, it’s a chardonnay to savour, aged in French and Hungarian barriques, but avoiding the woodiness of many of its competitors. I won’t go on about the other lovable wines I felt obliged to taste, except to say I didn’t spit any. Their cellars are carved out of the limestone, tunnels of barrels, elsewhere unlabelled bottles resting towards perfection. But I did eventually have to leave and explore Eger above ground.
A town of about 60,000 these days, Eger has a special place in the hearts of Hungarians for its heroic defeat of the Turkish at the seige of 1552. A small army led by the legendary István Dobó (his statue decorates the main town square) held off and eventually defeated the much larger Turkish army, which was on its way to rampage across Western Europe. No you don’t, said Dobó.
The robust castle – more like a fort – where this historic and bloody confrontation took place is open to the public. It is currently undergoing yet another major renovation and reconstruction (with EU funds) to provide visitors a real live experience in physical surroundings that approximate the original 16th-century fortress and lands. That includes ‘soldiers’ in 16th-century uniforms with 16th-century weaponry who stage mini battles. Five times a day.
I got a preview when one of the men loaded and fired his replica, in a bellow of gunpowder smoke. These days it doesn’t kill people but sets off the car alarms of parked vehicles nearby. Exhibitions include an array of artefacts, armour and weapons, and a 3D historical movie, all of which attracts some 300,000 visitors each year.
Down from the castle in the old town itself, I found Széchenyi square, the charming pedestrian mall with its cafes and shops, amidst the historic baroque buildings, and the cathedral (second largest in Hungary) built in the neo classical style in the middle of the 19th century. It boasts a vast organ with 8,000 pipes (also the second largest in Hungary); sadly I just missed the daily organ recital held at 11.30 each morning.
Opposite the cathedral is the impressive Eger University, dating from 1785, now teaching some 7,000 students. I didn’t count them but saw many of them in the mall. 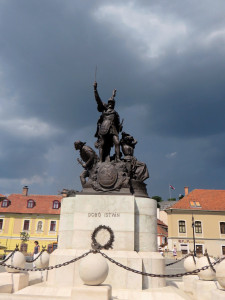 Art exhibitions in its halls complement the live performances in the university’s expansive quadrangle.
Not far from the pedestrian mall, in Harangöntö street, one of the many lanes and courtyards, I stumbled across what must be one of the rarest museums I have ever heard of, the Kopcsik Marzipan Museum. Mr Kopcsik makes anything and everything from marzipan, from a life-size football (of course) to busts of the famous and much more besides. You can even buy marzipan to eat.
Eger has a relaxed and appealing atmosphere, just big enough to have a wide range of shops and activities, and small enough to digest and enjoy in a short time. There are also many reasons (some in bottles) to return.