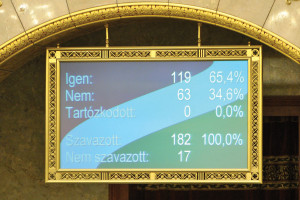 It’s done: Parliament has decided on the state budget for 2016. Normally this happens only in late autumn. The Orbán government is willing to prove to us that it makes sense to plan in this country again.

Prime Minister Viktor Orbán promised to deliver the state budget for 2016 before the summer break of Parliament and the Minister of National Economy, Mihály Varga, fulfilled the promise. The budget, as approved by a tight two-thirds majority in June, will bring planning stability and even tax reductions.
A total of HUF 230 billion will stay in the economy held by the workers, the families and the companies, said Varga, praising his own work. This is two-thirds of 1% of Gross Domestic Product. This huge amount is “given as a gift” by the father state to the loyal citizens.
Half of this will be spent on reducing income tax by no less than one percentage point (from 16% to 15%). This means that every taxpayer gets to keep HUF 30,000 a year more. Also, when purchasing pork meat, which the government communication mentioned as the second great achievement, consumers will save about HUF 5,000 on average in 2016. Taxpayers with two children will make an especially good deal, since they can deduct an additional HUF 60,000 from their tax over the year.
The extra tax burden of the banks will be reduced by HUF 60 billion, and in addition they will receive opportunities to deduct from the tax if they intensify their business activity. All other actors of the economy are impacted by the promise of decreasing bureaucracy and fees to the tune of HUF 10 billion, which is about the same amount that is spent on the development of vocational training, which will be beneficial for companies.
The macro-indicators promised by the government are perhaps more important, since they speak of the continued strengthening of the national economy. Growth will settle at a modest 2.5% after the heights reached in the past months, inflation will not be too bad with an annual average of 1.6%, and the budget deficit will be further reduced to 2.0% of GDP, just like the state debt, which will reach 73.3% of GDP by the end of 2016.
Even the critics fully agree with the government’s prognosis on growth (the GDP increase in 2016 is practically expected to reach at least 2%), and they are also on the same page regarding the deficit, which the Orbán government has been carving in stone from year to year ever since winning election in 2010, in order not to breach the Maastricht agreement.
Regarding the reduction of state debt, the government has set up every prognosis a bit too optimistically up until now, however today it seems as though the 75% expected by the Organisation for Economic Co-operation and Development (OECD) can be attained.
The most noteworthy item is the low inflation approach of the government, which is not really in harmony with the MNB’s estimation; they are calculating with an average annual inflation of 2.6% for 2016, just like the International Monetary Fund, the European Commission and the OECD. A whole percentage point difference on inflation significantly widens the government’s scope.
If we add this up with the various budget reserves in the total value of HUF 200 billion, we see that a total buffer of HUF 300 billion is built in: if the ambitious deficit target of 2.0% is not achieved, no one will ever complain.