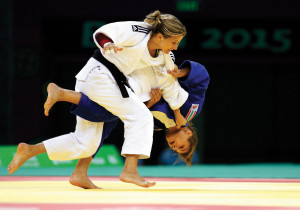 The inaugural European Games, held in Baku, Azerbaijan, came to an energetic close last weekend as the country bade farewell to the 6,000 European athletes at a colourful Closing Ceremony that paid homage to Azerbaijan`s moniker as “The Land of Fire”.

Featuring internationally acclaimed artists such as John Newman – who will be in Budapest this weekend along with Fatboy Slim and David Guetta for the Volt Festival and later this summer for the Sziget Festival – plenty of colour, lights and fire were on display in front of the 68,000 spectators.
The Hungarian team was led out by judoka Miklos Ungvári, a former European champion and Olympic silver medalist, who carried Hungary’s red, white and green in front of the country`s 200-plus athletes who competed.
Hungary fared well, finishing 11th on the medal table with eight gold, four silver and eight bronze. The team was led by a strong showing by the Olympic-calibre kayakers and canoeists, who took home fully half of the country’s medals, including five gold.
Hungary is traditionally a summer sports powerhouse and usually finishes high on the Summer Olympics medal table. That Hungary finished below countries such as Azerbaijan, Belarus and the Netherlands is more a testament to the mish-mash of events held during the Games.
The athletics competition was only held for two days and featured only two medals – for tier-four team events. The aquatic sports only fielded their junior teams and there were a number of non-Olympic events, such as karate, beach football and 3-on-3 basketball.
Still, many events fielded strong competition, while some even offered the opportunity to qualify for next year’s Summer Olympics in Rio de Janeiro, Brazil. Many Olympic champions also thrived in Baku, including Hungary’s own Danuta Kozak, Zoltan Kammerer and Gabriella Szabó, who all walked away repeating their champion-calibre successes.
What’s next for this sporting event is unknown. The European Olympic Committee had announced the Netherlands as host of the next tournament, but the country’s government pulled out of the bid on the eve of the Baku Games. The European Games – organised by Europe’s Olympic Committees – will also need to contend with the rival European Sports Championships, which are to be held in 2018 and are organised by the European governing bodies of the sports (which is why aquatics and athletics did not field their top athletes in Baku).
Regardless, Baku was a wonderful host and the Hungarian athletes in Azerbaijan did the country proud. We look forward to seeing what they can accomplish in Brazil.