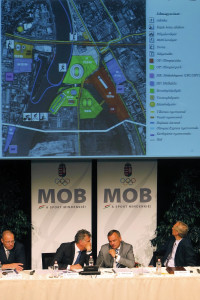 Prime Minister Viktor Orbán has proved convincingly with the Hungarian plan to organise the 2024 Summer Olympics that he is not scared of overblown, exaggerated ideas. And in fact his first government from 1998 to 2002 already envisioned hosting the 2012 Summer Olympics.

The fact that hosting this mega event carries a huge financial risk is shown by Greece, which is still suffering from the burden of the loan for holding the 2004 Summer Games. It’s questionable whether Hungary would be able to provide all the costly and gigantic sports venues needed, in a timely manner and starting from practically nothing.
Many recent construction projects such as Metro 4, the Margaret Bridge renovation and in Pécs when it was a European Capital of Culture in 2010 show that Hungary does not really do well in meeting building deadlines. Looking at all these shortcomings, experts see little chance of Olympics 2024 here.

Moreover, Orbán’s pugnacious temperament and his repeated conflicts and provocations on the international political stage will certainly not leave a good impression with the decision makers of the International Olympic Committee (IOC). The Hungarian application is furthermore competing with seasoned metropolises that have proven sport venues such as Paris, Rome, Hamburg and Boston.
A fundamental part of the decision where to award a Games is played by the citizenry. Hungary is not doing too well here either. Social support for a 2024 application has decreased from 70% to 60% in about five years, and of those 70% only 20% believed Hungary stands a good chance of winning.
Nevertheless, the Orbán government’s grandiose dreams were strengthened when the IOC published “Olympic Agenda 2020”, a document that increases the chances of small counties and favours applications where the construction projects and infrastructure developments organically fit into the future plans of the hosting country, which would be the case for Budapest.

The costs are a huge question mark 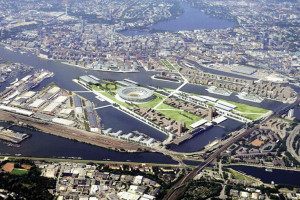 Hamburg will also compete for the 2024 Olympics

It’s difficult to determine the costs of hosting the Summer Games. Studies written in the time of the first Orbán government estimated around HUF 408 billion for the 2012 event. In 2005 this increased to HUF 518 billion for the Olympics 2016, eventually won by Rio de Janeiro. For 2024, audit company PricewaterhouseCoopers (PwC) conducted a feasibility study that arrived at HUF 774 billion. KPMG Tanácsadó Kft. reached a similar result.
Money already spent on numerous stadium renovations and the construction of new arenas (for example building Groupama Arena for Ferencváros Budapest Football Club for HUF 13.5 billion) is not included in the “Olympics budget”.  Then there is the rebuilding of Puskás Ferenc Stadion, about HUF 100 billion and to be finished before the Euro 2020 football championship, and the expansion of Dagály bath to host the Swimming World Championship in 2017, about HUF 49 billion, which with the  PwC and KPMG figures give a sum approaching HUF 1,000 billion.

Gold all the way: Fidesz MP

Hungary has a good chance of hosting the 2024 Summer Olympic Games, ruling Fidesz MP Erik Bánki said in Parliament on Tuesday. Bánki said the cost would not exceed HUF 774 billion while expected revenues of HUF 1.1 trillion would generate HUF 326 billion in profits for the state budget. The motion to bid for the Games has garnered remarkable support, he said.

Collateral costs of Summer Games would be enormous 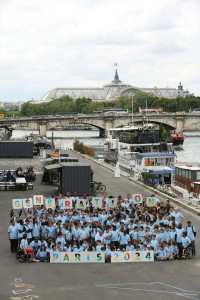 These are only the direct costs. Ongoing non-Games infrastructural developments of the next 15 to 20 years would need to be realised urgently in the case of a successful bid. Five years ago these “collateral costs” were estimated around HUF 4,654 billion.  Although part of this amount is already invested in such as Metro 4, the renovation of the vehicle park of Metro 2 and the renewal and expansion of tram lines, reducing the total sum, the remaining “collateral costs” would still amount to several thousand billion forints.
The specific amount is not known because the 1,300-page feasibility study for a Games is classified. However, if we calculate with the sums announced here and there, we come to a total of HUF 4-5 billion, which roughly corresponds to the magnitude of cost for the much disputed Paks nuclear power plant expansion.

Plans to be ready by February

Budapest Municipal Council and the Hungarian Olympic Committee (MOB) will apply together to host the Olympic and Paralympic Summer Games 2024. The submission by Mayor István Tarlós was accepted 25-1 with one abstention. Fidesz, Jobbik, MSZP and PM supported the application, a representative from DK was not present and the green alternative LMP was against. Parliament still has to approve the Letter of Intent issued by the capital and the MOB. Budapest needs to present its detailed plans for sports amenities, accommodation and transportation by February 2016. MOB president Zsolt Borkai is preparing the application in the light of the IOC’s “Agenda 2020”, which promises a move away from the gigantism of previous Games. This improves the chances of economically weaker applicants such as Hungary, which alone among the world`s leading medal winners has never hosted an Olympic Games so far.

Government and PwC calculate with a positive Olympics balance 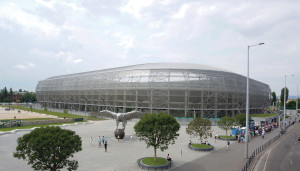 The Groupama Arena could be one of the venues in Budapest

The IOC will decide on 2024 in 2017. The Hungarian Olympic Committee (MOB) and the government both expect a positive balance if Budapest wins. The opposition believes the opposite, namely that the government clearly under-estimates the cost and over-estimates the income. In any case, PwC calculates with a profit of more than HUF 3,000 billion for the Hungarian economy. Of this the state would earn HUF 1,100 billion while the remainder would be earned by companies and private households. Supporters of the bid add into the equation that every single Hungarian citizen only has to pay the silly amount of HUF 600 a month for the next ten years to pay for the Games.
One item would be a new bridge on the Danube to Csepel, the planned main venue. The Danube would be the binding agent between the different competition sites, for which the navigation system would have to be shaped up.  About 40,000 athletes and their staff could be partly accommodated in hotel ships along the riverbanks. Besides Budapest the possible locations would be Győr, Veszprém, Székesfehérvár, Balatonfüred, Szombathely, Miskolc, Debrecen, Szeged and Dunakeszi-Alag, where the equestrian competitions would take place.

Critics say the gigantic project would be an ideal background for corruption, which already flourishes. The Games would soak up money for infrastructure elsewhere in Hungary. Finally, the example of previous hosts is that over-large and expensive venues, especially stadiums, end up mostly unused and eventually in a state of neglect.