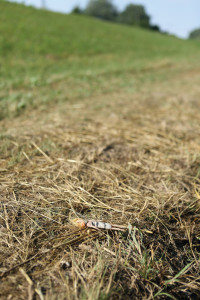 Many of them want to leave in the night, under cover of darkness. They want to cross the little Serbian village Martonoš and the densely forested floodplain of the River Tisza and arrive in Hungary. There are young men, families and even old people in the group of 30 refugees. Ahmed, 23, resting in a park in the small Serbian
border town Kanjiža, tells how he has been on the road for three months. He is a law student from the Syrian capital Damascus and he needs “to get to Germany”.

Ahmed has already spent EUR 5,000 during his escape from his home country plagued by civil war. He proudly displays a bundle of euro notes, which he pulls out from the inner pocket of his jacket. “I still have enough cash to continue my trip,” he says. What will he do once he arrives in Germany? He does not know yet but he will not give up until he gets there.

Hungary is forced to protect its southern border, Prime Minister Viktor Orbán said after a joint Hungarian-Serbian government session in Budapest last week. Hungary wants to maintain and expand its legal border crossings, and will not close the border at all but “we will do all we can to stop illegal border crossings”, Orbán said. Hungary is in “dire straits” as “the new wave of migration” is not just coming from the south, but “there is an intent to send back illegal border crossers to Hungary from the west, too”, he said. “As uncomfortable as it may be, we are forced to protect Hungary’s southern border.” Serbian Prime Minister Aleksandar Vucic said Serbia is proud of and happy with its good relations with Hungary, adding that the effort the two countries have put into developing their relations could not be undone by the fence the Hungarian government is planning. Vucic said it is especially important for neighbouring countries to be on good terms in difficult times.

Ever since the Hungarian government led by Viktor Orbán announced its intention to deter illegal migrants by building a four-metres-high barbed-wire fence along the 175-kilometre border with Serbia, the refugees have been in pure panic. They want to cross the border leading into European Union member Hungary before the fence goes up. 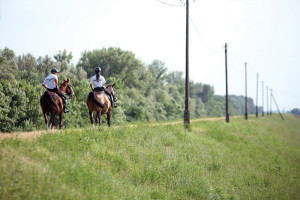 They come to the border even by taxi

Many of the refugees, especially those from Syria, Afghanistan and Pakistan, came through Turkey and Greece, crossing the Balkans and ending up in Serbia. They reach the Hungarian border by train, by bus and even by taxi from the Serbian capital Belgrade.  “Many of them carry a lot of money,” says a mother who lives in Kanjiža and came with her two children to play at the playground in the park.
Do the foreign people disturb her? “Not at all!” she says. “I see them every day. They are not dangerous. Most of them are young people and students with a civilised appearance and good manners. According to her mainly the older citizens are nervous about the growing number of refugees. Many of them can be afraid to leave their houses, she says.

In a group of refugees Samir, a Syrian high-school teacher in his 50s, says he has already spent around USD 10,000 to escape, travelling with his seriously ill wife, Ayasha. They want to get to Germany or Sweden as quickly as possible so Ayasha can undergo a life-saving operation at a hospital, Samir says. The skinny woman carries all the hardships of their escape on her face and resignation reflects from her sunken eyes. Samir and Ayasha decline our request to photograph them, as does Ahmed the student. 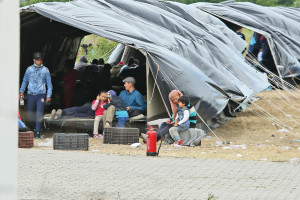 Change of scenery: on the other side of the border, in the quiet Hungarian border village Röszke, Sándor is standing in front of the pub. He is looking into the distance. Back there, behind the village next to a dead branch of the Tisza, a young refugee woman “from an Arabian country” gave birth. Another woman just changed her infant’s nappy on top of the freezer box in the pub. “We are just sorry for these people,” Sándor says.
Inside the pub the owner, “Katika”, is standing behind the counter. She tells us that these days “many refugees” show up thirsty and hungry in her bar. There are “Arabs, whites and negroes” among them. All pay with euros and “cause no problems”. Still, there are some local “old bags”, the “video surveillance of the village” as Katika calls them, who are “making a habit of” reporting the refugees to the police.
The police patrol Röszke and its neighbourhood in small buses around the clock. They comb through the alleys and fields even on horseback and mountain bike. High above, the rattle of police helicopters breaks through the idyllic silence from time to time. If the refugees are caught they are immediately transported to a small day camp on the outskirts of Röszke. From there they are carted off to one of the refugee camps in Kiskunhalas, Bicske or Debrecen.

“The refugees are treated well here”

The media is not allowed into the day camp, which consists of a hangar and a few supply tents. The young policeman at the door points out that refugees get something to eat every four hours. “They are not just getting anything there is!” So there is chicken for Arabians, since they do not eat pork. Even “baby food and diapers” are available for the small ones. “No one in the West should say that we Hungarians are mistreating refugees!” he emphasises.
In the camp there are primarily people of Arabic origin or black Africans. They are sitting together in large groups and they look like they are waiting for a bus to pick them up. An apparently completely weakened woman is being pushed in a wheelchair for medical treatment at one place, elsewhere a small child is crawling over his sleeping father.

The majority of Hungarians reject illegal migrants regardless of party affiliation, a survey by Nézőpont on commission from weekly Heti Válasz between June 19 and 25 showed. The representative survey was conducted by phoning 1,000 people, with 76% saying illegal migrants posed a problem for Hungary, Nezopont said. Even among the supporters of left-wing parties nearly 60% said illegal migration was a problem. More than 50% of those interviewed said they would take in ethnic Hungarians from abroad, the persecuted and those arriving legally. However, 57% said they rejected economic migrants and 73% rejected illegal migrants, with 63% saying increased migration posed a security risk for Hungary.

The young policeman can’t stop himself from expressing his opinion: “My collective opinion (sic) is that the refugees cost us too much money. And there is more and more of them.” They should be shipped back to Greece, the country where they entered the EU’s territory. The opinion of the young doorkeeper matches strikingly with that of the Hungarian government.

Prime Minister Orbán expressed his opinion recently that in Europe “we are not speaking of a refugee stream any more but about a mass migration”. According to Orbán Hungary is not able to ward off the numerous refugees any more. This is why the barbed wire will be mounted on the Serbian border and “if need be” at other sections of Hungary’s border.
And it is why the much-debated national conversation was initiated, to question whether Hungarian laws on migration should be tightened. Then there is the a poster campaign, designated as “crude and primitive” by its critics, in which immigrants are asked with a dozen variations of Hungarian sentences to keep the nation’s laws and not take away jobs from Hungarians.
Orbán and his government call attention to the exploding number of refugees arriving, more than 60,000 so far this year against 2000 three years ago in a full year.

The refugees leave their traces behind

Only a few kilometres from Röszke we can find a village called Gyálarét, an outskirt of the Hungarian border city Szeged. The police are scouring the environment in large contingents here too, especially the deep woods in the floodplain of the Tisza behind a dam. Traces of the refugees are easy to find in the woods.
There are pieces of clothing, backpacks, bags and sleeping bags everywhere, left behind by people as they departed the scene in a great hurry, dropping all unnecessary ballast. Among the abandoned items are a small doll, a child’s shoe, a bag of spoiled bread, phone cards from a Greek telecom company and two asylum application forms from Belgrade, filled in for two minors from Aleppo in Syria.
A Hungarian woman from Gyálarét walks across the dam with her four children. They are searching through the rubbish for things that could be still used. The children say whole crowds of refugees cross on the dam every day. Sometimes they see small trucks bringing refugees. When they are asked what they want to be when they grow up, one of the boys answers emphatically: “Policeman.”
A woman with bright red hair joins in the conversation. She is upset. According to her she is worried about her children. It’s scary when one of “these people in groups of twenty” come face to face with you. “We are all sorry for the refugees,” she says, “but their skin is so dark, you never know.” The thing that worries her the most is: “You can’t just switch them off, you see them everywhere.”