I can never forget the first sight of the Colosseum glowing gold in the September light as I emerged from the metro station in my favourite city, Roma. And I will never forget the ugliness which shrouded Barcelona in a grey mist as I first saw the Sagrada Familia on a gloomy February day when I was heartbroken and spent the week in a hotel where the lights were snapped off centrally at 11pm like a prison.

Anywhere can be heaven or hell given the circumstances of your life; a beautiful blue sky can be a cold mocking azure. Cruel hard Moscow can be rendered softer with love flowing through your veins and the beauty of Paris is just plain ugly to the lovesick, the rejected, the sad souls who have lost everything they wanted in a whisper.
And sometimes the first visit to a place is magical. Then, you are forever chasing that elusive high like a hopeless junkie. Nothing is so sweet as the first time. Pécs never seemed so lovely  as when I saw it first after a frenzied summer in Budapest. Even the air was beautiful. It had the scent of flowers and hope. With its ice-cream-coloured buildings sitting lazily in the heat and its Italianate piazzas and fountains I thought I had found myself.
Pécs understood me when I returned to Hungary from a frozen wildnerness of winter and spring in Latvia and Lithuania. The contrast of the far north-east of Europe where the wind was razoring through the snow-swirled streets and the tombstone-grey tower blocks was immense. Here in Pécs, spring was shaking the blossom trees, the houses fat and gentle and empathic after the Baltic wasteland I had just left. But its first-time magic was already fading.
It wore away and became tarnished like a lover showing the other side to themselves. I lost loves there, I lost restaurants I once enjoyed, I lost friends. It is still beautiful;  the wedding-cake buildings, the piazzas and fountains and ice-cream parlours. This is the Mediterranean of Hungary and it has a Mediterranean soul as well as appearance. 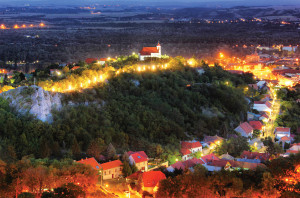 For the first-time visitor, I hope you see what I did. There is none of the frenzy of a Budapest summer with its spitting, sizzling streets. Less than three hours south of Budapest by train from Keleti station lies this gentle university city.
There are plenty of cultural places to visit; the Zsolnay Cultural quarter, 15 minutes walk from the compact centre; art galleries, summer festivals and you can take the white toy train that circles the city centre.
It is worth spending a day above the city in Tettye, the entrance of the central Mecsek mountains where you can find a peaceful park overlooking the city, a treasure trove of caves and sculptures and trees. In the white lime rock of Havi-hegy hangs the awe-inspiring sculpture of Christ on a crucifix,  made by sculptor Sándor Rétfalvi. In the dying pink light of a summer’s evening when viewed from below, it stands like a grim warning high above the city.
The Tüke Wine House is also based in Tettye, where you can taste 30 to 50 wines made in Pécs. The Mecsek hills provide a microclimate ideal for grape growing, softening the cruel winter and sheltering the vineyards.
Summer is a dark period for theatres everywhere; the beautiful  Pécsi Nemzeti Színház with its mini Trevi-style fountains outside is best visited in autumn  but there is no shortage of cultural events throughout the summer. The tourist information centre on Széchenyi tér provides you with all the information on the many music and cultural performances in and around the city. 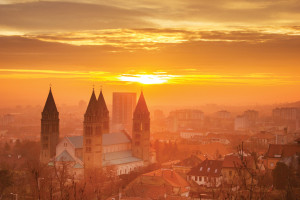 To enjoy the city without the intense heat of central Europe,  May or September are the ideal months; warm without the oppressive heat that makes sightseeing a trial. But if you want to avoid that overpriced most overrated stretch of water in Europe, Lake Balaton, August can be the best month to head south.
There are plenty of guesthouses scattered across Pécs; the best deals can be found on booking.com. If you like old-world grandeur there is the Hotel Palatinus on Király utca in the centre of the city, which guarantees you won’t have to walk far.
Király utca itself is lined with restaurants but they are very touristic. I ate the most hideous salad in history here. Anywhere that offers chicken or pineapple or duck on a pizza would have an Italian chef crying into the sunset.
For consistent Italian cuisine, All’ellefante on Jokai tér is the best and ice-cream parlours are everywhere adding to the life and colour on the streets.
I am chasing the magic I once found. I know it is still here.