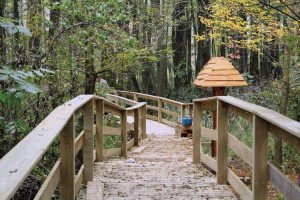 Summer in Budapest is exciting but demanding in the heat, and locals and expats alike appreciate a little rural tranquillity. One attraction in the modest town of Tata only one hour from the capital is waiting to be discovered by more people.

“Originally I’m from Komárom, only 20 kilometres away from Tata,” Judit Nedeczky says. But it was only recently that the 23-year-old sales employee and her family discovered a part of Tata they had not known before, and they were positively surprised.
She is talking about the nature trail “Fényes” (meaning “shiny, full of light” in English), which is named after the creek running across it. Just one and a half kilometres from the town centre, there is a swimming pool there called Fényes as well, which offers a means of refreshment after tracking on the trail.
Tata had been considering building a nature trail for years. It took a while to accomplish and now it looks like there is work to be done marketing the attraction, because this part of the town is still unknown to most people.
“Whoever is interested in eco-tourism and in nature in general will surely like the nature trail,” Nedeczky says. “I hope more people will learn about it.”

Informative signs in English too 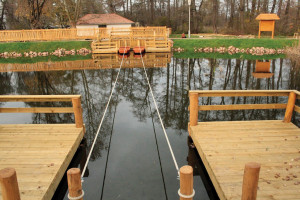 It all began in autumn 2012, when the Tata council applied for financial support for “developing a touristic attraction”. The construction works began after the approval of the claim in December 2013 and they were finished in November last year.
The idea was to separate the area of the “Fényes Spring”, which is the central point of the nature trail, from the territory of the swimming pool and set up informative signs explaining the specialities of the location in Hungarian, English, German and braille.
The wet green natural area is described as swampy forest, and can be visited all year round. Due to mining activity the karst springs dried up in 1973. After the mining stopped, the forest and meadows could regenerate by the new millennium.
A lightly carbonated water with a temperature between 21 and 22 degrees Celsius comes from the spring, ensuring that no ice forms even in winter. It’s not surprising that these circumstances have led to the establishment of a one-of-a-kind flora and fauna around Fényes.
Plants such as the rare spider orchid, the white lily and buttercups are blooming, and the long-eared owl, spotted crake and ferruginous duck, which is a protected species, are only some of the bird species that you can spot in Tata with a little luck. Nedeczky caught a glimpse of the latter during her visit. “We have also seen turtles and frogs,” she says.

Secrets of the karst spring 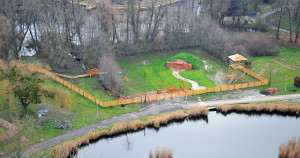 The family actually came to see a music event in Tata, which takes place every year near the castle. “It was Saturday and we wanted to see the nature trail. Even though it was weekend and the weather was nice, you could comfortably walk around the nature trail. The establishment is also large enough to host larger groups of people without problems.”
It was an interesting experience to learn about the natural resources of the area, and instead of simply drily stating the information, the signs involve the visitor interactively. There are 18 stations in total, where you can learn all there is to know about the swampy forest and the karst spring.
Nedeczky says the spring was not discovered for quite a long time because people did not venture into the swamp. Today the experts estimate that about 2,400 cubic metres of water squirt from the ground there each day.
“At one point of the nature trail you can see an enormous amount of water coming from the karst spring, and the pressure of the whole thing, since the spring water is directed into a tube,” Nedeczky recalls. This is one of the creative presentations along the trail, and youngsters can enjoy a playground, walk over a suspension bridge and ride in a boat. A Visitor Centre has information.