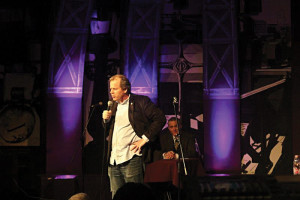 If I had a pálinka for every great idea I’ve had that’s come to nothing, I’d be in a state of permanent inebriation. I could live out the rest of my days high on the fumes of failed ambition. Great ideas I can do. It’s making them happen that confounds me. Not, of course, because I’m incapable; more because I just can’t be bothered. There always seems to be something else to do, something more important, something more immediate.

Over a lingering lunch about six years ago in a restaurant called Vadász just behind Arany János metro station, I sat in the almost surreal British-pub like interior with my good friend Gretchen Meddaugh. We were bemoaning the fact that so many people in Budapest had yet to appreciate that speaking in public is one of the best, and cheapest, legal highs a body can get. Forget the pálinka – if you needed something to make you feel alive, all you had to do was to get in front of a microphone and speak.
As the conversation bounced back and forth, we parsed and analysed the various forums in the city that facilitated speaking in front of an audience and decided that it needed one more – one that was unfettered by rules and regulations, one that was unstilted rather than scripted, one where people could come in to their own. And Gretchen made me do it.
Since then, each year (bar one) expats and Hungarians alike have been testing their mettle, getting on stage in front of friends and strangers alike to see if they have that gift which is universally attributed to the Irish  – the gift of the gab. And yet after five successful seasons, which have produced five stellar finalists, there’s not one Irish person to be seen amongst them. The mind boggles.
The gift of the gab is variously defined as (i) to talk idly or incessantly, as about trivial matters, (ii) the ability to talk readily, glibly and convincingly, and (iii) the ability to speak easily and confidently in a way that makes people want to listen to you and believe you.
In two weeks, on Friday September 18, the Final of the Finalists takes place.  Rupert Slade (2010, English), Patrick McMenamin (2012, Scottish), Hans Peterson (2013, American), Viktor Morandini (2014, Hungarian) and Jennifer Walker (2015, English) will compete to see which one of them has that unequivocally Irish trait, that ability to talk to just about anyone, just about anywhere, about just about anything.
For those of you who have yet to attend the charity speech slam (where have you been?), it goes like this. Each contestant gives a five-minute prepared speech on a topic of their choice and a three-minute impromptu on a topic suggested by the audience. (And we’ve had some doozies over the years – can you imagine speaking for three minutes about peas? Or curtains? Or pavements? Or why bird poop is black and white?)
Five judges chosen on the night will decide who gets to take home the trophy. It’s all happening at the New Orleans Music Club on Lovag utca in District VI and kicks off at 7.30pm. Doors open at 6.15pm for those who’d like to eat. Tickets can be purchased from the venue (10am-5pm) and cost HUF 2000-2500. All proceeds (every single forint) go to the Irish Hungarian Business Circle’s Give a Little charity campaign that supports Topház Speciális Otthon, a special-needs home in Göd.
See www.speechslam.com for more details. Come along. Be entertained. Support the cause. In today’s world of redundant political rhetoric, it’s not often you get the opportunity to see hot air and bluster do some good.

Mary Murphy is a freelance writer who loves to talk. Read more at  www.stolenchild66.wordpress.com