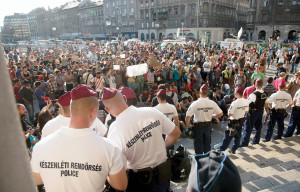 At this point in this European mess about refugees Hungary seems to be the only Schengen country that is trying to stick to the letter of the law, and this is causing incredible problems. The EU so far has been unable to find a solution, and a recent statement by Angela Merkel – saying that Syrian refugees will be accepted – has now caused many of these unfortunate people to claim they are Syrian… and there is no way to tell, because many of them don’t have papers at all. But that’s not the biggest problem. Say we are able to separate Syrians from the other migrants. According to the rules of the Dublin Regulation and the Schengen Agreement, Hungary is not supposed to just let migrants travel without the proper documentation. A German politician wanted to launch infringement procedures against Hungary and Austria for letting migrants make their way to Germany, because it’s clearly a violation of the Dublin Regulation. So now we are not letting them travel, which of course prompted opposition politicians and civil rights movements to start bashing the government. So Hungary is basically hammered for not letting migrants board trains to the west and Hungary is hammered if authorities let migrants board trains to the west. The very definition of being between a rock and a hard place.