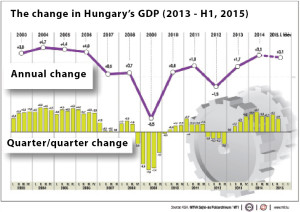 The slowing economic growth and the new top score in state debt are something to think about, on the other hand the unrestrained increase in real wages and a top surplus in the trade balance are reasons for hope. What will happen to the Hungarian economy in the second semester?

The economy did not stop during the summer vacations either: the Central Statistical Office (KSH) reported growth of 2.7% for the second quarter. This result was disappointing against the expectations, since in the beginning of the year we were amazed by a growth of 3.5%. This resulted in an average growth of 3.1% for the first half of the year.
The government is trying to view this result in a positive light, saying that the planned 3% for the whole year is still not unrealistic, provided that the second quarter result is just a “slip-off” and does not become a trend.

The bar is put too high

There are some reasons for this result: in the first place we have to mention the high base value, since last year the economy grew by 4.1% in the second quarter. This was the strongest quarterly result that the Orbán government was able to generate in the past five years. However, this bar proved to be put too high for the year 2015.
The second reason was reported by KSH: agriculture was not able to repeat the performance of the previous year. As crop yield data is not yet final, we are only talking about a large-scale estimation by the statisticians at the minute. However, it sounds quite bad that the Hungarian conjuncture – even if it’s not totally dependent on the agricultural sector – can be influenced solely by the weather conditions, sometimes upwards, sometimes downwards.
This is how the farmers were able to contribute to the Gross Domestic Product in 2015 with a top score of one eighth last summer and even by one fifth in autumn. A year before that, when the industry was still walking in another valley of shadows, even half of the GDP growth happened thanks to agriculture.
The opposite also happened, when in 2012 the agricultural sector managed to pull the Hungarian domestic product to the basement all by itself, and only the positive contribution of the service sector was able to compensate.

For the fact that 2015 is not becoming a new 2012 we have to thank industry, primarily. Its output increased by a total 7.3% in the first semester, gaining a surplus of 9.3% on the foreign markets and 3.3% on the domestic market. The order backlog was 10% higher compared to last year. Industry has been the most important growth driver in Hungary, just like it used to be, and they employed almost 3% more employees in the first half-year, managing to achieve a productivity increase of 4.5%.
Within the industrial sector the automotive industry is currently keeping a dominant status with almost 30%, and with dynamics also reaching around 30% the whole structure of the manufacturing sector will be shifted. In the first quarter the manufacturing sector managed to create an increase of 8% (!) in added value, compared to 2.3% in the service sector.
KSH will be able to present the same type of statistics for the second quarter in the beginning of September. Within the broad spectrum of services the real estate branch might present a positive surprise, as a new growth driver besides trade and hospitality.
The construction industry is understandably far from the boom of the last year, since the state has already awarded most of the public contracts in the course of last year. Since this golden rain will continue to gradually dry up eventually, every month with a two-digit growth result can be celebrated as a success.
Because some dark clouds are gathering: when adjusted with the seasonal effect and the number of working days, two of the first six months already went downhill. The number of new orders decreased by 10% in June, the volume of booked orders is not much more than half of the value from the middle of 2014.
However, June was also the first month this year when the volume of production in construction ended up over HUF 200 billion. In 2014 the construction industry generated about HUF 2050 billion, when valuated at current prices; most likely we could be very happy with 4-5% more at the end of 2015.

Industry is the backbone of Hungarian exports, so the continuous industrial growth logically shows its result in the trade balance. The most modest surplus was reported in April with around HUF 500 million, and the first six months totalled to a never-before experienced surplus of EUR 4.3 billion. The total exports of EUR 45 billion are EUR 1.1 higher than the records booked in mid-2014. Hungary does need such surpluses in order to improve its position on foreign markets.
However, the state debt is still enormous; at the end of June it reached 80% again, according to the actual data of the Hungarian National Bank (MNB). Still, it would be too hasty to judge now that the assets of around HUF 3,000 billion from the private pension funds were burned in vain in the crucible of international debt service.
It’s a fact that the consolidated Maastricht debt of the Hungarian state amounted to HUF 25,880 billion at the middle of the year, which is nominally the highest amount of debt ever recorded. After seeing such numbers the question will be raised inevitably of how serious the Orbán government actually is about the priority of decreasing the state debt, when they are spending almost USD 700 billion for the acquisition of Budapest Bank right in these critical times. The net position of the state balance is not shaken by the transaction of course, since the bank shares are landing under the assets side.
The net state debt increased rapidly from about 60% to almost 75% of gross domestic product at the middle of 2010, but since the middle of last year we have experienced a slowly decreasing trend: at that time it was only 71.2% of the GDP with HUF 23,130 billion.
The government and the central bank are hoping that the Maastricht debt will be back to the originally planned 76% by the end of the year, since they are calculating with a growth of 3%, a stronger national currency, returning inflation and the fact that this stunt was successfully managed last year – at that time the alarm bells were ringing in mid-year with a value of 82.7% in debt, and still, a final value of 76.9% was reached by the end of the year.

Government bonds for bread and butter

There are two further reasons for optimism: the recently very economic state and a population that is very happy both with the reorganised money trade and financial market. The state was able to decrease its borrowings to 1% of GDP, which means its appetite decreased to about one third within one year.
In the meantime, the net financing position of households increased to 7.7% of GDP, namely to HUF 2,500 billion. The population is helping with the active purchase of government bonds to decrease the state debt in foreign currency with about 2-3% each year. The Centre for the Management of External Debt (ÁKK) considers that it’s absolutely feasible for the state to be financed completely from the domestic market within two decades.
Since mid-2013, so now for more than two years, the growth trend in retail seems to continue. In the previous year the trade volume increased by more than 5%, while in the first half of 2015 the growth trend increased even to 6%. Such results are backed up by a solid increase in real wages, which reached 3.5% in the first semester.
A full-time employee was earning around HUF 243,000 in average each month between January and June, bringing home around net HUF 160,000. Because the living expenses are more or less stagnant, now every family is able to spend one or two ten thousands more, or finally manage to save them for rainy days.
The government announces confidently that “the reforms are working”. Only time will tell whether the positive results can be sustained in the long run.