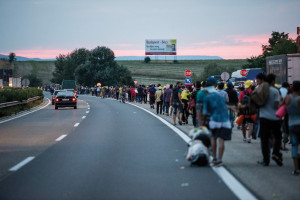 After several hundred migrants set off by foot on Friday afternoon from Budapest’s Keleti station westward with the intention of going to Germany, the Hungarian, Austrian and German governments finally gave in. While the former provided some 100 buses for transportation, the latter two announced the temporary
opening of the border and their willingness to accept Syrian refugees.

The migrants progressed along Rákóczi út on the pavement and the edge of the road in the direction of Erzsébet Bridge with several children being carried on their fathers’ shoulders. The group – which grew to about 1,000 to 1,200 by late afternoon – continued its way toward the M1 highway, the main road toward Austria.
The refugees were walking westward on the M1 motorway, and 300 others along a main railway line to Vienna, which had been closed for safety reasons.
By the evening a session of the government’s operative staff was called and a decision was reached to provide buses to carry migrants from Keleti and others who had already set off to Hegyeshalom border station.
Minister in Charge of the Prime Minister’s Office János Lázár declared that the transportation to the border did not mean migrants could “automatically” leave the country. The government was awaiting Austria’s position on preconditions for crossing into that country, he said.
A few hours later Austrian Chancellor Werner Faymann announced that, because of the current emergency situation, Austria and Germany had agreed to admit the refugees. The first bus arrived at Hegyeshalom at 2.30am, with the migrants getting off and walking across the border.

EU quotas not ideal but better than nothing

Opposition party LMP said on Saturday that it is hard to imagine a better alterative in the current migration crisis than to introduce a mandatory quota system. MEP Tamás Meszerics said it is certain that the quota proposal “is not ideal in its current form, since it is an improvised solution”. At the same time, Hungary would have done better out of a quota system compared with the current situation, in which there are thousands of migrants stuck in Budapest, he said. 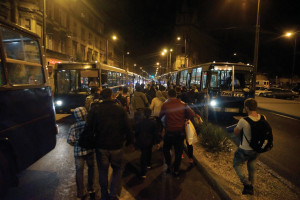 In the meantime, the sunken plaza in front of Keleti railway station, where migrants barred from taking trains west had waited for several days, almost emptied. By 5am, however, the underpass became once again filled by refugees eager to know whether further buses would be available to travel to Austria.
The following day government spokesman Zoltán Kovács announced that “no further buses are planned to take illegal migrants to the Austrian border… It was a one-off decision. No further migrants will be taken to the border from either the Keleti station or the reception camps.” The spokesman stressed the need to find a European solution to the migration crisis and expressed hope that there would be some progress in this direction in the days to come.
While no additional bus convoys were provided, regular railway traffic resumed by the end of the week and migrants were allowed to board westbound trains in small groups.

Police used tear gas against a group of migrants who refused to go to a collection point after entering Hungary, and two people were detained near Röszke in southern Hungary late on Tuesday, a local MTI correspondent reported. The group of around 150 migrants set off towards Highway 5 after entering Hungary from Serbia. Police used tear gas to prevent the migrants from joining another group who had left the collection point earlier in the evening. Around 50 migrants, mostly families, eventually accepted the police’s request and boarded buses that took them to the collection point at Röszke. Police had used interpreters to convince people they need to register after arriving in Hungary. Many in the crowd were chanting “No camp” and “Budapest, Budapest”.

On Sunday more than 130 cars arrived from Vienna to pick up refugees and take them to Austria. After crossing the border, the convoy split up with cars heading to Hegyeshalom, Győr in northwest Hungary and Budapest. Austrian news agency APA reported that the volunteers made a stop in Nickelsdorf (Miklóshalma) to protest against the Dublin rules. The convoy was backed up by Austrian police until it reached the Hungarian border.
The group’s organiser told Hungarian state news agency MTI that many of the volunteers had driven to Hungary on their own before to help refugees get to Austria, adding that the reason they were now doing it as a group was because it was “safer”. In response to a statement by Austria’s Interior Ministry saying that anyone taking part in the operation was punishable, the organiser said the volunteers were risking “ridiculously less” than the migrants. The police should rather be punishing those who don’t take on migrants, the organiser said.
A spokesperson for the Austrian police noted that transporting migrants across the border counts as human smuggling in Hungary and is punishable by jail, while in Austria it is an offence punishable by a fine of up to 5,000 euros. 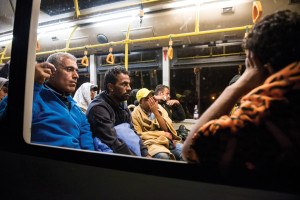 On Monday – addressing the start of a two-day meeting of Hungary’s foreign mission leaders –, Prime Minister Viktor Orbán said that people who had already made it to Turkey, Greece, Macedonia, Serbia, Hungary and Austria are already safe, so they are not running for safety. They have actually “set their eyes on life in Germany”, he added.
Hungary does not exclude the possibility of “a sensible and fair” discussion of the European Union quota system but “we have a problem with the timing”, he said. Orbán said the quota system only set out to address the consequences of migration instead of dealing with its causes. All international participants were prepared for the current situation, except for Europe. He added that Australia, the United States, Israel and the Gulf states have all refused to take in the migrants.

The opposition Együtt party demands that Hungary take in 10,000 refugees this year and 5,000 next year, on a voluntary and long-term basis. Viktor Szigetvári, the party’s leader, said on Monday that while Hungary is a homogeneous country, it needs new workforce to make its pension and welfare systems sustainable. It was also Hungary’s moral duty to take in migrants. At the moment all “well-intentioned Hungarians feel shame at last week’s actions by Prime Minister Viktor Orbán and the Fidesz government”, he said.

Orbán dismissed the idea that anyone had the right to tell Hungary to significantly change its cultural and ethnic composition. In connection with this the prime minister said Hungary “historically” had a minority of a “few hundred thousand” Roma, yet it was not asking other states to also live together with a significant Roma minority. The latter statement prompted objections from opposition parties as well as the Hungarian Roma community.
Hungary’s position was not “anti-Islam” and it does not want the issue of migration to cause a deterioration in relations with states belonging to the Islamic civilisation, he said.
On the subject of Hungarian legislation passed last week, which comes into force from mid-September, Orbán said it is not reasonable to think that any perceivable improvements would come about already on September 16, but the government does expect results step-by-step. Hopefully one day Hungary’s borders will be hermetically sealed, while designated border crossing points will be available for entry, he added.

So far this year police have picked up 169,337 illegal migrants and caught 955 people smugglers, while the immigration office has registered 157,746 migrants, according to official briefings on Tuesday. The immigration office is working round the clock at ten points nationwide to process asylum applications, Attila Kiss, the office’s deputy head, said.