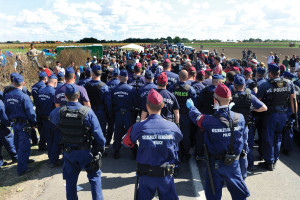 The one overriding question asked of me was “Is it as bad as they say?” And the only answer to that is no. It’s worse. And then they asked why Hungary (and by implication, Hungarians) wasn’t doing more. People in Germany were offering up their homes on AirBnb. Austrians were driving to the border and beyond to pick up families and take them home. Angela Merkel was offering to take in hundreds of thousands. Ireland might only be taking 4000 (to our shame, some say) but Hungary doesn’t appear to want any at all.

I had neither the political nor the sociology background to answer their questions with anything even approaching authority. But when I started to talk about my experiences and what I’ve seen and heard and read, I was a little surprised at what came out.

None of the current Hungarian government is on my Christmas card list. Neither is the Roman Catholic Church in Hungary. I believe they both could have done more. And yet I found myself taking quite a defensive position.

I reminded my petitioners that here in Hungary, people don’t have much. Monthly take-home salaries are figured in hundreds of euro rather than thousands. Flats are small. There are no spare rooms to offer.

Some 40% of the population hasn’t enough to make it to the end of the month. Farmers watch as the crops they need to get their family through the winter are picked clean by those passing through. Many in the east of the country live hand to mouth. Many in the cities, too.

And while the international press might scathingly report on the quality of food provided at the camps, they forget that patients in Hungarian hospitals fare no better. And while they castigate the police for their heavy-handedness, they forget that Hungary, as a Schengen border country, has been charged with keeping that border safe.

And yes, it could all have been done differently. Ideologically it’s a shared border that should be manned by all Schengen countries. The responsibility should not fall on Hungary alone. But then does Hungary want help? Yet another question I cannot answer.

The government here is making a hames of it all (and it’s not alone). But the people, individual Hungarians, are showing a generosity of spirit that should not be forgotten. It has to be difficult to see Keleti awash with young people scrambling not for food but for places to plug in their smartphones. To see queues at Western Union as money is wired for train tickets out. To see placards thanking Germany and shaming Hungary.

It’s an impossible situation. Everyone has an opinion. Many are simply afraid.

Afraid that ISIS might be using this exodus to Europe as a cover. Afraid that we might wake up one morning to find our churches replaced by mosques. Afraid that our poor and our homeless will lose out to those who are looking not for a safe place to live but for a better standard of living.

Fear makes us say stupid things. It makes us batten down the hatches and indiscriminately protect what we have. It makes us add exclusivity clauses to which neighbour we should love.

And while letters of accusation fly back and forth between governments and EU leaders scramble to get their act together, more and more refugees arrive at the Schengen border in the hope that they will be granted access to a safer world. The very least that we can do is to show some compassion.

Mary Murphy is a freelance writer who is struggling to make sense of it all. Read more at www.stolenchild66.wordpress.com