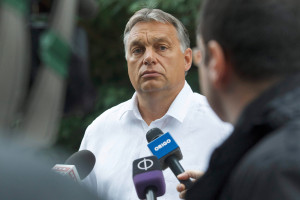 It is natural to feel sympathy for migrants “but sympathy is not enough: action is needed,” Prime Minister Viktor Orbán said in an interview for the Saturday edition of German daily Bild. Asked how he felt about the Syrian boy washed up on a beach, Orbán said he had been shocked. The loss of each and every life is a tragedy, he said. “But I also thought of his parents who had left a safe refugee camp outside Syria and risked their lives and those of their children.”

In response to a question about the extent to which the refugee crisis can be seen as a German issue, Orbán said Germany’s decision to let migrants enter its territory freely had “triggered an uprising” among the migrants in Hungary. Until then, the Hungarian authorities had managed to keep the situation under control, but Berlin’s announcement had caused “chaos”.
Asked to compare the current situation with Hungary’s opening its western border in 1989, Orbán said the East German refugees had not stayed here illegally, had respected the law, and Hungary had let them leave for the West on its own accord. “But now foreigners are breaking through our borders,” he said.
In response to a question about what it feels like to be Europe’s “chief villain”, Orbán said: “I cannot do otherwise. We Hungarians are guaranteeing the free movement of Europeans and we are protecting their borders”.
Migrants are being cheated both by human smugglers and European politicians who promise them a better life and the right to stay, even after peace has been restored in their homeland, he said. “The honey flowing in Germany will soon seem less sweet than they hoped.” Living standards were determined by performance rather than needs, he said.
Asked about where the refugees should go if Hungary closed its borders on Tuesday (as subsequently happened), Orbán said they should return to where they came from. “They are not arriving from a war zone, they are not fleeing danger and they are not coming to Europe to find safe haven but to have a better life, perhaps in Germany or Sweden.”
Orbán added that living in safety and human dignity are fundamental rights but having a better life is not. European leaders were living “in a dream world” and were “unaware” of the dangers. “If we let everyone in, Europe will perish”.
The prime minister said that at the next EU summit he would present a plan to provide substantial financial support for Syria’s neighbours. He praised Turkey for its “extraordinary performance” in handling the migration issue. “We should say Mass for Turkish President Recep Tayyip Erdogan every week.”
Orbán said the contribution of member states to the EU budget should be raised by 1 percent and EU spending earmarked for other purposes cut by 1 percent. The extra funds raised this way should be used to support Syria’s neighbours.
Asked about the refugees who are already in Europe, Orbán said “none of them want to return. I am afraid they will stay here.” Refugee quotas would only make sense if the borders were kept closed, otherwise no one would know how many people should be distributed among the member states.
It was an “illusion” to think that the migrants sent to Estonia or Portugal under the quota system would remain there if they wanted to go to Germany.
Orbán called on Brussels to exert greater pressure on Greece, which he said had failed to protect the EU’s external borders for years. “Had Greece met its obligations, there would not be a refugee crisis.”
Concerning the danger of Islamisation, Orbán said he respected Islam but, due to migration, Muslims would become a majority in Europe in the foreseeable future. “If Europe allows a competition of cultures, it will lose.”