Attention canoers! Céltorony is the newest place to go out to eat and is expected to be very popular with water sports fans. The design of the sports bar at the southern corner of Népsziget guarantees a sporty maritime flair: oars hang from the ceiling, lifebelts decorate the walls and tables are made from boat hulls mounted with a glass plate. The treats prepared on the special grill imported from the US tempt the visitors with culinary delights. 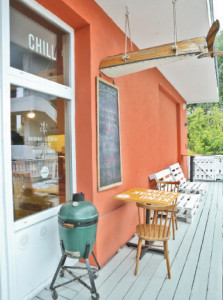 The Marina Part on the banks of the Danube in the northern part of the city is an undiscovered terrain for many, but it’s one of the most rapidly developing residential areas in the city. Apartment houses that offer comfortable living with a great view on the river and many opportunities for sports and recreation are sprouting like mushrooms.
This section of the riverbank is popular especially due to the sport and yacht marina at Meder utca. This is where you can find the Céltorony sports bar as well. 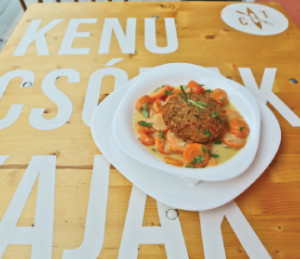 Márton Stoller, the owner, fulfilled a dream by opening his own restaurant. The businessman and organiser of tailored grill events had been looking for the right place for a long time, to settle with his special grills. Besides this Stoller is a passionate water athlete himself, so he was happy about the chance to take over the building of the former premises of Budapest Canoe Club.
Both the interior planned by designer Miklós Kiss and the name of the bistro are a homage to the canoe club: Céltorony, or in English “finish tower”, refers to the place at the finish line to watch the arrival of the winners.
The spacious terrace of the sports bar, which is filled with comfortable wooden benches and tables, houses Stoller’s pride and joy: a ceramic grill oven from the US built in the fashion of a Japanese Kamado oven, which has an oval shape. The shape and its colour earned the oven the nickname “The Big Green Egg”. 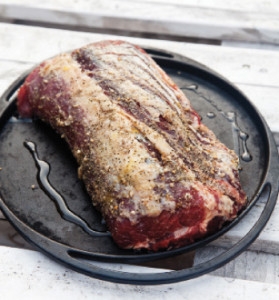 The biggest advantage of the “Egg” (which counts as a cult object in the US) compared to the traditional grills is that it has thick, heat-insulating walls and a heavy ceramic lid, which allows closing the cooking space. This permits slow cooking at low temperatures.
The BBQ sandwich with a thick filling is one of the specialties of the house. The meat for this sandwich is cooked for ten whole hours in the “Egg” until it’s so soft that it falls apart just from touching it. The minced meat mixed with a home-made BBQ sauce and spicy mustard is served in a crispy panini and garnished by a small salad.
Even if the name sandwich usually stands for a snack, you should not be fooled – the BBQ sandwich will satisfy even the hungriest canoers. The same goes for the salty Czech Utopenec grilled sausages, which are especially enjoyable accompanied with a cold beer. 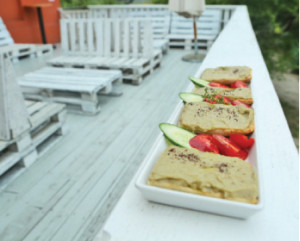 Céltorony also offers a meatless alternative: thanks to toasted bread slices served with a paste made from grilled aubergine, vegetarians do not have to renounce the hearty smoky BBQ taste either. 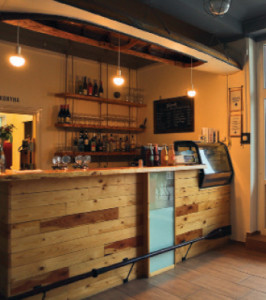 As an addition to the rather short menu card, Stoller puts a lot of emphasis on the weekly, or even daily, changing menu offers. “I go to the market hall early in the morning to find the most fresh and valuable ingredients, and we use those to cook something,” the passionate chef explains.
This way the products that are put on your table are not only seasonal but mainly local. This is an advantage in the eyes of those who are paying attention to their ecological footprint.
Grill – Bier – Chill is what you can read over the entrance of Céltorony, so besides the cosy atmosphere and sophisticated grill recipes, beer is the third specialty of the house. Stoller is one of the particularly passionate fans of the barley drink, so he mainly offers taste-intensive artisan beers made in Hungarian and Czech micro-breweries.
The brands change regularly, with Stoller ensuring that they always have at least one lager beer or pils, one dark beer, one Indian Pale Ale and a type of wheat or fruit beer on stock.

Many roads, one finish

Céltorony may seem quite remote at first look but if you are planning a trip to Meder utca you will quickly notice how versatile and exciting the roads are on which you reach your goal.
A painted bicycle lane leads from the Parliament almost directly to the bistro. An experienced biker only needs 15 to 20 minutes on this nice bike path along the Danube.
You can also reach the sports bar with the public ship line of BKK, metro (line 3, station Gyöngyösi utca), bus (lines 15 and 105, station Gyöngyösi utca) and last but not least you can travel on water individually by canoe, rowing boat or motorboat .
If you are making a visit to this part of the capital, you should also take the time to walk on the neighbouring Népsziget and look at the abandoned old shipyards.