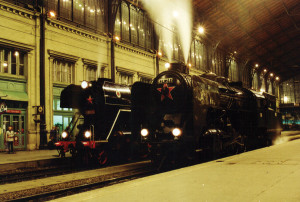 Greater minds than ours have theorised that “to travel hopefully is a better thing than to arrive” (author Robert Louis Stevenson), and “The journey is the reward” (Taoism). Such deep sentiments can only be admired but on this day on this train trip our purpose is more prosaic. We are here for the beer.

The fancy-looking, old-style train standing at the platform in Nyugati Railway Station is obviously of a different breed to the other more nondescript carriages present. This is the “Pivo Express” run by the state railway company’s MÁV Nosztalgia subsidiary, and it pulls out punctually at 6.05am for Brno in the Czech Republic.
“Pivo” means “beer” in the Czech language, and the train has a bar carriage for partying. Brno is a beer hot-spot, home to three breweries, one of which will be visited. The Czech Republic is noted for the high quality of its beer and consistently boasts the world’s highest consumption per capita. Brewing took place in Brevnov Monastery in the year 993 and it is apparently the first country to have a beer museum, a beer brewing textbook, a pilsener and a budweiser.
Despite these impressive achievements in the art of elbow bending, it is unlikely that on this day in September 2015 anyone in the republic is outdrinking our Hungarian companions on the Pivo Express, who are straight into the amber fluid on the dot at 6.05am.

The bar carriage, called Orfeum, is a party venue on wheels with pumping music, disco lighting and a dance floor. Draught beer, pálinka, whisky and Unicum, moreover white, rosé and red wines are available and it is busy with revellers, while other passengers sip away in their carriages.
When we arrive in Brno, Starobrno Brewery’s decorated “Beer Tram” is waiting to take the merrymakers on a brewery tour, with more imbibing. Eventually the day’s jollity will take its toll, and on the way back from Brno to Budapest the Orfeum is noticeably quieter as some of the booze is slept off.
The journey is one of more than 30 organised each year by MÁV Nosztalgia, which started up in 1993 by organising steam train trips from Budapest to Lake Balaton, mostly for German tourists. Since then the idea has grown in popularity to include trips to Vienna, Prague, Bratislava, Kosice, Krakow, Wachau, Semmering, Puchberg am Schneeberg and elsewhere.
Most journeys are day trips but this July a four-day pilgrimage was made to Isonzó on the Slovenian-Italian border, the scene of a series of 12 battles between the Austro-Hungarian and Italian armies in World War One.
Domestic journeys include the Tihany Lavender Festival each June, wine tasting journeys and Advent Trains to Vienna/Graz. MÁV Nosztalgia also runs about five Candlelight Express Dinner Trains a year, in which paying guests take a romantic ride in old teak dining cars hauled by steam train to the Danube Bend, the Cuha Valley, Esztergom or Gödöllő.
These are evening trips usually starting with one on Valentine’s Day in February through to December. A pianist and individual table lighting and flowers with the promise of premium wines and dishes create a cosy atmosphere.
MÁV Nosztalgia’s fleet features more than 100 preserved vehicles such as the “100-year-old train” dating to the turn of the 19th century, a handful of steam locomotives and half a dozen Swedish Nohab diesel engines that survive from 20 built for Hungarian State Railways in the early 1960s.
We read about the Nohabs that “The M61 type has achieved a cult status in Hungary because they were used to haul most of express trains to holiday resorts around the Lake Balaton region. Their images became closely associated with teenage summer camps, exploration and family recreation during the Socialism era, when foreign travel was highly restricted for the average citizen.”
Our trip to Brno is undertaken in a first-class 1970s Pullman Club car, where two adjustable seats face another two over a table. A hostess brings mineral water, coffee and tea for free, plus a couple of little surprises and treats to enliven the trip, such as a shot of firewater, chocolate wafer bars and a competition to win discounts on future journeys.

The two first-class carriages are separated from two second-class ones by the Orfeum car and an attractive restaurant car with bacon and eggs or ham and eggs for breakfast, then goulash, wiener schnitzel with mayonnaise potato salad or túrós csusza pörccel, and rétes or Balaton szelet for dessert.
MÁV Nosztalgia is off to Linz in October and will make five trips to the Vienna Christmas markets and one to Semmering in Austria for skiing in December, all day trips. The 2016 schedule should be out next month.
The Pivo Express is on its return journey. Its passengers, time travellers all, are train buffs who hanker for the vintage days, with a passion for rail travel and for keeping its history alive (not forgetting the beer). They would probably be quite happy if they were on Stephenson’s Rocket.
As we pass through the Czech and Slovakian countryside, besmocked peasants interrupt their toil in the fields, where they wield wooden hoes to tend their mangelwurzels, and gaze appreciatively at the smart blue-and-cream livery of the passing retro carriages. It is a sight difficult to resist.