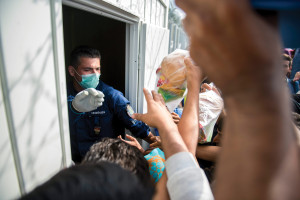 With new regulations coming into force on Tuesday, crossing Hungary’s border illegally now qualifies as a crime, carrying a three-year prison sentence and expulsion from the country. People smugglers may face tougher prison terms than previously, with 10 to 20 years locked up. 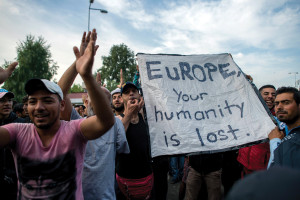 The new legislation also allows the government to declare a state of crisis due to mass migration for up to six months, and already on the first day two southern Hungarian counties announced the new condition. The measure will stay in force as needed, government spokesman Zoltán Kovács said.
Migrants now have two transit zones, at Röszke and Tompa border stations, to file asylum applications. The procedure involves registration of personal and image data as well as fingerprints. People in the transit zones are provided food, and accommodation unless their application is evaluated within 24 hours.
Applications are to be evaluated within a maximum eight days and the decisions are appealable. Those rejected will be returned to Serbia, György Bakondi the prime minister’s chief domestic security advisor, said. Migrants are not in detention while in the transit zone and can leave the area at any time, he added. 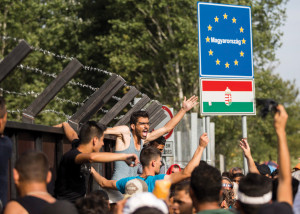 Due to the slow process of registration of migrants, police decided to temporarily shut down one of the legal border crossings at Röszke between Serbia and Hungary, which led to a four-kilometre tailback on the Serbian side of another crossing, Tompa, by Wednesday morning. According to press reports, migrants on the Serbian side were not yet attempting to cross these borders.
And this may not change in the near future. According to Serbian news outlets, buses used to transport migrants en masse to the Hungarian border are now diverted to the Serbia-Croatian border town of Sid.
Croatian police on Wednesday said they were registering refugees entering from Serbia and would transport them to reception centres near the capital Zagreb, the news channel Aljazeera reported. A police spokesman in the eastern border county of Vukovarsko-Srijemska confirmed an unspecified number of refugees had crossed into Croatia, after a Reuters news agency cameraman saw at least 100 walking through fields across the border.
Croatia might have to get used to the influx of migrants as Lajos Kósa, the Fidesz chairman of Parliament’s defence and law-enforcement committee, already announced that Hungary will do all it can to protect the Schengen border unless it receives an official indication that it is unnecessary.
Kósa said people’s judgement of Hungary was changing from day to day. “Those who condemned us with frothing mouths a month ago now say that Hungary’s measures are correct and Hungary is the only country that is keeping to the Schengen and Dublin agreements that apply to it,” he told the M1 channel.
Though a few thousand migrants are still waiting at the Serbian-Hungarian border in hopes of making it to the EU, the Facebook page “Avoid Hungary – Migration News” offers a new map (pictured right), which suggests an alternative route to the Schengen Zone of the European Union via Bosnia and Croatia to the Slovenian border.
Hungary’s new laws cracking down on illegal migrants have “heralded a new era” in the crisis, Bence Tuzson, the spokesman for the ruling Fidesz party’s parliamentary group said. Tuzson said Hungary now has a “three-layer line of defence” on its border with Serbia, consisting of the border fence, police and amendments to the law. He said the new laws have restored order on the border. 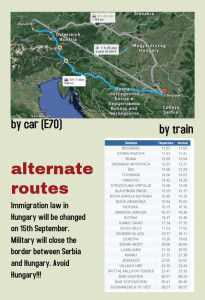 Hungary’s Demján Group has offered 1 million euros to improve services for the children of migrant families. The Demján Foundation said the migrant crisis could prove to be “the greatest humanitarian challenge” of the 21st century, and called for “the most efficient and humane” European practices to ease the problem. The funds should be spent on food, clothing, transport, health services and information material for migrant children staying inside Hungary and along its borders, as well as to aid officials and volunteers working with them, the foundation said. Entrepreneur Sándor Demján called on “private individuals, businesspeople and institutions in and outside Hungary” to contribute to the fund in solidarity.

In response most opposition parties offered their opinion about the recent measures of the government.
“There is no way the cabinet can stop the wave of migrants crossing the country,” József Gál, a spokesman for the green LMP party, said, adding that closing down the borders and criminalising refugees will not resolve the situation; those expelled from the country will attempt to enter the country again, Gál insisted. 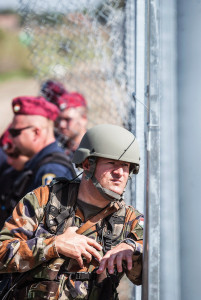 He said LMP wants refugee camps to be expanded and the police and the immigration authority reinforced. Further, information should be made available to both the migrants and local residents. Deploying the military along the border was “not only unnecessary but unconstitutional too” and “soldiers should leave their guns in their barracks”.
According to the Együtt party, developments in Hungary are against the Geneva Convention. Hungary’s rules that took effect on Tuesday are not only a violation of humanitarian principles – making the majority of society feel uncomfortable – but also go against “all international accords Hungary has signed over the past 50 years”, party leader Viktor Szigetvári said in Röszke.
Hungary is not required to accommodate all refugees but should support the European Union’s proposal to introduce mandatory quotas, Szigetvári said. “Migrants should be provided safe haven in Hungary, an opportunity to register, while a common European mechanism should be set up to ensure that not all of them are stuck in Hungary.”
Richárd Barabás of the Dialogue for Hungary (PM) party said that “the government does not even abide by its own laws”, and insisted he had proof that the authorities were deliberately misleading migrants. “Migrants are being forced to confess in writing that they are illegal entrants despite their crossing into Hungary at legitimate crossing points.”
According to the Hungarian Liberal Party (MLP), the government declared the state of crisis hastily because the current situation does not yet justify such a measure. István Szent-Iványi, the party’s foreign policy adviser, warned of growing tension along the border and the danger of violent clashes. He called on the government to improve ties with Austria, Germany and the EU leaders. 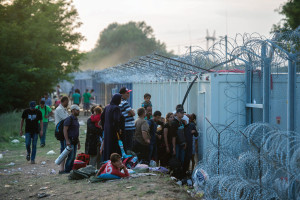 The radical Jobbik said Hungary should not allow a single migrant to enter its territory or settle here long term either under a quota system or through deportation. Dániel Kárpát, the deputy parliamentary leader of the party, noted that the government should make clear whether it is prepared to receive migrants returned to Hungary from western European nations, and it should clarify its position on quota-type solutions. Jobbik will initiate a binding referendum to thwart any such moves, he added.