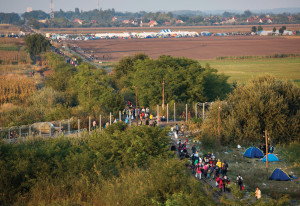 Articles about the migration issue posted on our website – budapesttimes-archiv.bzt.hu – and our Facebook page – facebook.com/BudapestTimes – are receiving more comments than any other topic. Here’s a selection of what you had to say about the controversial situation of Hungary.

I applaud the Hungarian leadership for resisting the irrational and counter-productive indignation of western European opinion. I believe Hungary, along with the Czech Republic, Slovakia, and Poland are destined to become the last redoubt of western civilization. – tito perdue

Hungary is an example of the past of Europe, a place where we should never ever go back to. A pathetic country, they have nothing to be proud of, only Budapest. – Berni

Shame on you Hungary, your lack of humanity is sickening. – John
Shame not on Hungary, but shame on the USA. How silent they are on this mess that they created. Hungary should be applauded not condemned. – Me

Keep up the good work! There are Europeans who are behind you all the way. – Sussie

This stone-cold comment shows us why we have to be super-vigilante against intolerance and hate, sneaking in everywhere in our common space. The world is full of small, twisted, hateful minds, such as “Sussie” – Caveat Emptor! – Carin
I am British and … I don’t know what is going on with these European leaders but it appears to me that they are seriously lacking in brain cells. Giving aid and helping genuine refugees is something we ought to do, but to open your borders to everyone claiming asylum is just downright stupid. Even if they do sort out the real refugees from the economic migrants, how will they deport them? They are already in the country and they will just ‘disappear’ if they know they will be deported. Your PM is the only one showing common sense and the others are just brainless sheeps behind Merkel. – Anon

It is sad that some people choose to raise “civilizational”, cultural or religious differences and turn a blind eye to human suffering. I wonder what makes these people feel that the fact that we come from one continent necessarily makes us one culture that produced a higher civilization. – arcenciel

Well, Orbán said it very clearly – Hungary doesn`t want Muslim immigrants as they feel it should stay a solely Christian country. Although being an atheist I probably know much more about what the Christian religion tries to teach than this self-declared bigots like Orbán and co: humanity – chris

It is absolutely disgusting what Hungary is doing to refugees. These bastards must have forgotten that North America opened its doors to thousands of Hungarian refugees. – Ralph 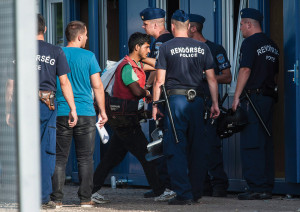 I was one of those ungrateful people in 1956… I was only 5 years old and didn’t know I was ungrateful. We registered as refugees, and were very grateful for what followed. We were not economic migrants, the Russian army had just destroyed our home and lives with heavy artillery. We were not heading for a country with a wiz-bang social security system like this current mob are… We were simply glad to be out of the war zone. – peter

I have been watching the headlines from the US and it is really sad that Hungary is getting a bad wrap here. It is not your problem that suddenly all these people show up and I agree that you should be careful with people who have no documentation, especially in a time of terrorists that come out of nowhere. Your country is the size of Indiana, which is pretty darn tiny. To expect you to suddenly be the leader of the world’s problems is ridiculous. – J Vegh

Hungary is doing the right thing in securing its border with Serbia. Every country in the world has a right to secure its borders from invaders. What is being called the migrant crisis in Europe is actually an invasion by people from many different countries and backgrounds. No one actually knows who these people are while they travel freely across Europe. No doubt some of them wish to do harm to European countries. Orbán is 100% correct in wanting to keep Europe safe and strong. Angela Merkel has made a terrible mistake in throwing the doors of Germany wide open. – Rick

Shame on Hungary and on people who support the position against those in so desperate situation! It’s unbelievable to see such lack of compassion for hopeless people. It seems that feelings like puritanism of race is already praised by some Hungarians. – Vagner

Hungary is not a terrible place at all. I am a Romanian (not of Hungarian origin) and I testify to this fact. I own my career to my training in Hungary and I will be forever grateful for it. Hungary is just a very small country dealing with a huge crisis. They do what they can. Stop drinking the sugary kool aid and try to evaluate the situation logically. – KJ

Bravo Hungary! We in Norway support the way you deal with endless stream of people that try to force their way to Europe and Scandinavia. If the UN did more in Turkey and Lebanon for those who come from Syria maybe we would not be in this mess. So thank you Hungary. Stay firm, and don’t give in. – Arnfinn Kristensen 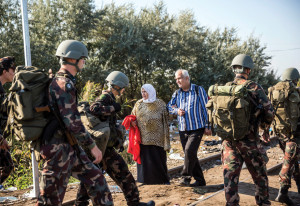 I’m an American of Greek descent. I wanted the Hungarian people to know that it is NOT wrong to enforce the law and keep the migrants out. What the imbecile Merkel did, by announcing to the whole of the Middle East that Germany is welcoming migrants was insane. She must be suffering from dementia. If Germany wanted all those migrants, she should have chartered planes and flown them over, instead of imposing on her neighbors by the unending hordes that were sure to follow. – bob karp

Disgraceful lines of argument from a historically uninformed leader. No surprise though, Hungary – both the state and the church – collaborated with the Nazis during World War II, something they (along with Austria) never came to terms with as they pleaded guilty of being victims themselves! – Robie Ashton

For goodness sake, how did a place as physically beautiful as Hungary, with one of the best capital cities in all of Europe allow its stupid government to turn Hungary into the shame of Europe? – Debbie

These people are economic tourists. They want Germany because of their welfare system. Hungary has enough problems with its own entitlements. – bill