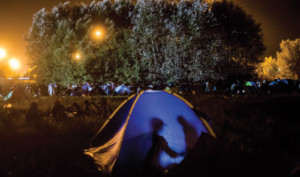 Open for tourists, closed for migrants – this is the message of the Orbán government for foreigners. Tourism is booming, as if the refugee crisis could not influence the image of Hungary as a travel destination at all.

The Serbian border is closed – besides the police, now units of the armed forces are engaged to guarantee the safety of Hungarian citizens, and that of the millions of tourists who are visiting this country in the heart of Europe this year as well.
We could already imagine the photos in the opinion-forming Western media as soon as the first conflict between the soldiers and the refugees occurred, and it duly happened. The one-sided presentation of an “Orbánistic” police state is their job.
For example, that photo of the refugee who was trying to protect his family crossing the rails from the aggressive law enforcement officers. This photograph was intentionally picked out of a series to present how the man himself threw his own wife and child on the tracks, while the puzzled policemen were trying to protect the family from the obviously crazed father.
Either way, such photos are not beneficial for Hungary’s image. Typically for Prime Minister Viktor Orbán he is trying to solve problems as a sober lawyer; almost as if the government is not willing to show any human emotions and compassion.
This is a real blessing for all the media, which condemn Hungary in general. However, the one-sided reporting in the West has not been able to influence tourism up until now. This economic branch closed a fantastic year last year, and in the middle of 2015, looking at the first flock of data coming in now that the high season is ending, it looks like we are anticipating another top score this year.

Ádám Ruszinkó, the undersecretary of the Ministry of National Economy, said these words on public television channel M1: “Migration does not influence domestic tourism; we do not have a dramatic situation here. The Hungarian authorities are working in a professional and sensitive way, while the charity organisations are delivering a superhuman performance in order to help the migrants.
“This all does not concern touristic sights, travel routes, accommodation and restaurants at all, since no migrants are appearing at these scenes. The branch will be able to continue its success story.”
This is how it looks in terms of numbers. There were almost 14.5 million overnight stays registered at commercial accommodation countrywide between January and July, and the number of foreign and domestic tourists was more or less in balance with each at about 7.2 million people – all three results are about 7% higher than the comparable data from 2014.
The occupancy rate at hotels in the period this year increased 3% year-on-year, reaching 52%, and in July it rose even by 5% to 67%. In the meantime prices in the sector climbed 11% on average, so the total turnover was HUF 200 billion-plus by July already.

A whole country is being dressed up

Hungary would like to receive at least HUF 240 billion of European Union funds in the cycle 2014-2020 directly for tourism. We see bicycle lanes being built, wine trails made more attractive, observation towers rebuilt, markings on trails in local recreation areas, such as the trails with blue markings (Kéktúra), are repainted, and nature learning trails and picnic areas are built nationwide.
Following a wave of investments spent on thermal spas under the first Széchenyi Plan, now smaller hotels and pensions may also apply for funding for building additions or wellness areas. There are now a dozen adventure parks and summer bobsled lanes in the country, not to mention the “typical Hungarian” touristic attractions ranging from Lake Balaton to any “csárda” to the cave bath of Miskolctapolca, which was renovated for a nice amount of money just recently.
Whether you would like to sail, ride, fish, hunt or play golf, discover castles, palaces or parks – Hungary offers more and more opportunities that meet the European top standard.
Last year the gross turnover in tourism amounted to HUF 330 billion, there were around 24.2 million overnight stays and an average occupancy rate of 52%, all of which are high scores. The continued boom of wellness hotels contributed, as did the 4,000 additional beds in affordable hostels and the 20 new four-star hotels built across the country.
Hotels are the real backbone of the tourist industry of course (holding around two-thirds of the bedding capacity), generating about 90% of the total turnover in the sector.
Every sixth foreign tourist comes from Germany and tourists from the American continent have just taken over second place from Austrians. The Russians were ahead of the British last year, which will most likely not be the case again this year. The Italian, Czech and Polish tourists are now followed by the US-Americans, who have just surpassed Romanians and Slovakians as visitors.
Hungary has a reputation as the country of a thousand thermal springs, and for this reason spa tourism is one of the pillars of the industry. The first rough estimates of visitor traffic in the almost 200 healing and adventure pools show there will be an average 10-15% more guests, while some destinations may even add 30%.
The Bath Association is talking about the strongest season of the past decade. The weather helped their case, with five heat alarms this summer season. Baths near the borders recorded 25-50% more visitors from nearby countries such as the Czech Republic and Poland.

More and more foreign tourists arrive by air. Budapest Airport Zrt., the operator of Ferenc Liszt International Airport, reported that in the single month of July the number of passengers hit one million for the first time in its history. Passenger numbers grew 12% in the first semester, so about half a million more tourists arrived between January and June than in the same period last year.
Last year the airport celebrated hitting nine million passengers. Discount airline Wizz Air plays a major part in the fact that Budapest Airport is showing the largest dynamic in Central and Eastern Europe. Wizz Air has just gone public in London and not in Budapest or Warsaw, however their Hungarian general director is concentrating on realising their ambitious expansion plans, which include doubled capacity and operating more than 100 modern airbus planes in the middle term, and always offering more and more destinatinations – available also from Budapest.
At the moment it looks as if foreign tourists are wanting to profit from the weaker and weaker forint. Even the deterring photos of refugees are not really influencing them. Ultimately, Orbán’s strategy not to let Hungary be transformed into a single large refugee camp might pay off.
Hungary’s attractiveness, along with the other Eastern European countries that refuse the idea of multi-culturalism, might even increase significantly, especially for those tourists from Western Europe who would like to visit the original Europe.