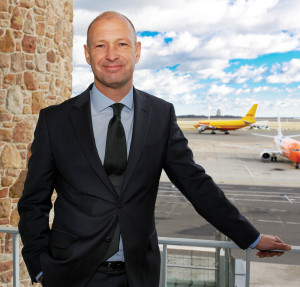 In upcoming years, Budapest Airport will be spending more than 15 million euros annually on development, as the construction of a new pier can begin to extend the passenger capacity of Terminal 2, CEO Jost Lammers has outlined in an interview with state news agency MTI.

In Lammers’ opinion developments are justified by the continuous and strong expansion of passenger traffic at Ferenc Liszt International Airport, because they served more than 9 million passengers in 2014 already, which is more than ever in a single year, including the Malév era.
This year passenger traffic has increased by 12%, raising the prospect of exceeding 10 million by year-end for the first time. The two-digit growth rate is above the traffic growth recorded at other airports in the region (Budapest has 12.3% in the first six months of this year while the EU average is 4.9%), and although it is not easy to maintain it, management foresees 12 million passengers for 2018, added the CEO.
To handle this many passengers the capacity of Terminal 2 would have to be extended. Due to the increased number of long-haul flights, development would primarily affect the B side where the most urgent development task is the construction of a new pier that – connected with the main terminal building – would be able to serve several discount carriers and traditional ones as well as narrow-body and wide-body aircraft at the same time.
Lammers said the design is under preparation, the relevant construction tenders will be announced next year and the project may be completed by 2018. In addition, areas of passenger security screening and car parks would be extended and upgraded.
The CEO is convinced that there is considerable potential in building new logistics facilities, new warehouses and offices serving the needs of air and land cargo companies. He emphasised that they have not discarded their earlier development plans of a cargo centre, but for their implementation “more time and robust growth will be required”; execution of the Cargo City should not be expected before 2018 or 2019.
Lammers said there is real development potential in some other areas linked to aviation such as the maintenance, repair and operations (MRO) business. Currently there are some 750-800 highly skilled jobs at the airport at Aeroplex of Central Europe and Lufthansa Technik Budapest, which maintain and overhaul Boeing- and Airbus-manufactured aircraft.
Both companies had significant market and development potential and in the future might become similar economic success stories such as the automotive industry in Hungary. Lammers expressed his conviction that the well trained and highly educated workforce is available for the aviation industry as well.
The conditions at the airport are excellent, its transport connections are advantageous and its area exceeds that of London Heathrow, one of the busiest airports in the world, he said. Concerning passenger traffic, Budapest Airport had developed what he calls “a healthy mix of low-cost carriers and legacy airlines” catering for all kinds of travel needs and different kinds of travellers.
It was also important that 99% of passengers now travelled to Budapest and Hungary and did not only transfer to other countries. These point-to-point passengers spent money in Budapest and thereby contributed to the GDP increase, while transfer passengers (until year 2011 there were 1.5 million per annum) stayed only briefly at the airport and did not use services in Hungary outside the transit area.
It was, however, a disadvantage that without transfer passengers it was more difficult to bring new airlines operating long-haul flights to Budapest because currently there was no feeder or regional airline in Budapest.
Lammers said that compared with the Malév era the position of the airport has somewhat weakened in that the South Balkans region has not been covered by anyone, although there is significant potential. Travellers could currently only reach Podgorica, Sarajevo, Tirana and other Balkan destinations from Budapest via Vienna or Munich.
These connections are missing, he said, adding that a feeder or regional airline would be needed for this to operate flights with a fleet of regional turboprop aircraft of smaller capacities.
Regarding the reopening of Terminal 1 he highlighted that the building is not suitable for handling passenger traffic any longer, and it is not economical to maintain double services at the airport in two different locations six kilometres apart. The Terminal 1 building itself was a marvellous piece of architectural heritage and must be preserved, thus it was impossible to modify its internal dimensions because it was needed for example to install new passenger security areas for greater throughput. 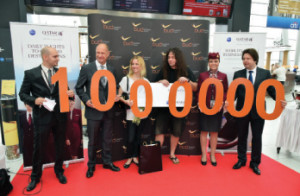 Budapest Airport currently uses the building for conferences, car shows, concerts and a significant number of film shoots.
The CEO said all future passenger-related developments will be centered on Terminal 2 where there is enough free space for any construction. One of these in the nearest future would be an on-airport hotel with conference facilities, because this had been required both by passengers and airlines, and there was a well-founded business case for it.
Even though the data published by the International Air Transport Association show that air cargo traffic has been stagnating, Budapest Airport had had a different experience, and the increasing number of long-haul flights had a positive impact in this respect because the aircraft serving on long routes could carry 12-15 tons of cargo on each flight.
It is quite surprising how strong is the immediate demand of Hungarian manufacturers to export goods to China through direct belly cargo connections with the Beijing flight, for example, Lammers said.
He sees the strongest chance of opening new routes in the North American direction and management is working on launching a possible Budapest-New York or Budapest-Chicago flight. Traffic to South America is moderate but the Far East market is very well-served, as premium carriers of the Gulf area are already offering flights from Hungary to all major destinations.
“Towards the east we have excellent options through Dubai, Istanbul or Doha. Perhaps not many new direct flights but rather the quality of connectivity is what really matters for a lot of passengers flying to the Asia-Pacific region.”
Budapest Airport would continue its international marketing efforts to bring new airlines or to open new destinations to Hungary, and this would bring around further development of Ferenc Liszt International Airport. The process of persuading individual airlines might take sometimes two to three years; they were currently in negotiation with several companies.
Lammers said Budapest as a tourism destination has undergone profound changes in the last seven years and has become one of the most exciting cities in Europe for all kinds of tourists and all kinds of budgets. He was convinced that even more new markets could be opened for Hungary by well-coordinated and increased marketing efforts.
“Budapest has become simply a chic place but it needs more and more advertising to maintain interest.”