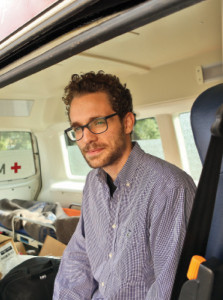 Anti-immigrant government billboards, chaos at Keleti railway station and elsewhere, razor wire, riot police and clashes on the Serbian border: the wave of asylum seekers has eclipsed most other issues. Among the civil volunteers helping out is András Spányik, a doctor, and he thinks the task is far from finished.

When did he start? “I can’t recall the exact date but sometime when it all began, as the first refugees started showing up in Budapest,” he answers. It happened in a completely spontaneous way, when he and a few of his doctor friends went to Keleti “as a guerrilla action”.
Spányik got the idea himself because he comes from a family where helping others is self-evident. “In addition I am very sensitive to the suffering of other people, and it was probable that the people who arrive here will be needing help,” he says.
Also he felt anger that the government was doing nothing to help the asylum seekers. At first there were no civil organisations on the scene, with Migration Aid just being established. Soon, the Red Cross, the Hungarian Maltese Charity Service and other volunteers were chipping in.
Following a short summer vacation, Spányik returned to Budapest and Keleti. “When I came back, Migration Aid had already set up temporary premises where they could provide regular medical help.” The various doctors founded Medical Aid, which acquired its own ambulance car sponsored by Hungarian start-up company Prezi.
The car is equipped with a defibrillator, electrocardiograph equipment, workwear, an army tent and an aggregator. “We need the tent to examine and help patients on the spot,” he says. Now that Budapest has quietened down after the wave of refugees, Medical Aid still has a lot to do. “Now we want to go to Tovarnik [on the Croatia-Serbia border] with the ambulance and help there first.”

They are collaborating closely with other organisations on the spot, such as Doctors without Borders, who have been so short of staff they can barely catch their breath. The medical aid service really demands a lot from the volunteers. “I am usually working in the emergency room, so I know the situations well when someone needs help as soon as possible,” Spányik says.
However, refugee aid is not so much about dressing wounds and curing diseases. “Sometimes all that these people need is a little attention, someone meeting them at eye level,” he adds.”
A few vitamin pills may suffice but there have been bone fractures too, And almost all his patients have had wounds on their feet after walking distances, “several thousand kilometres”, Spányik believes. Cuts from the razor-wire fence, dubbed the “border Gillette”, are also quite common, even among children.
He says it is not difficult to see that some fractures were caused by rubber truncheons. A common saying in refugee circles, apparently, is: “Rather a hundred Hungarian police officers than one Greek.”
Allergic reactions to food are common – and childbirth. Spányik was present at a birth shortly before the riots at Röszke on the Hungarian-Serbian border. “We wanted to take our ambulance but we were not sure if we would be able to pass the border with it, so we loaded everything that we could in a regular car.”
The car boot was not even checked at the border control. They found the place where people were waiting behind the closed border.  “It was like an absolute hell. People were laying and sitting around without the slightest care at all.” After searching a little longer, they found a “tiny little doctor’s tent”.
“We wanted to call an ambulance for the woman, who was already in labour, but she refused to leave the site.” It was pure luck that a Hungarian doctor and a midwife could attend.
“We also brought a lot of stuff that is absolutely necessary at a child birth, for example sterile gloves and insulating film.” The new tiny earthling arrived in the world shortly before the riot broke out.
How does the young doctor experience such situations? “Helping is never a smooth assembly-line job, it can sometimes be very different from the emergency room. People expect to receive a service at the hospital. Compared to that, I have received an incredible amount of thankfulness from the refugees.”