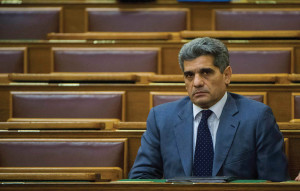 Hungary’s Roma are “on the verge of tearing themselves apart,” a senior Roma official has said after an extraordinary meeting of the National Roma Self-Government (ORÖ) was abandoned because a number of delegates walked out.

László Vajda, deputy leader of the Lungo Drom party which is affiliated to the ruling Fidesz party, went on to say that Lungo Drom itself is “tearing itself apart” and that its leader, Flórián Farkas (pictured) who is government commissioner for Roma affairs, is aiding and abetting this process.
The meeting came after investigators of the tax and customs office (NAV) had raided ORÖ’s headquarters and seized documents last Thursday. Vajda added that Farkas had needed a strongman to head ORÖ but because its chairman, István Hegedűs of Lungo Drom, had taken certain steps, Farkas now treated him as an enemy.
Hegedűs had asked the assembly to evaluate the work of the organisation’s financial control committee, which is investigating alleged graft connected with ORÖ, and to discuss a proposed amendment to its budget.
But a row developed over voting procedure and several representatives left the chamber, after which Hegedűs suspended the meeting. He told journalists afterwards that everyone wanted a renewal of the organisation. He said that over the past 1-2 years ORÖ had failed to serve the interests of voters, and it was of paramount importance to continue negotiations on this matter with representatives. He added that a divided ORÖ is not in the interests of Hungary’s Gypsy community.
Hegedűs said the current ORÖ leadership had not committed any abuses and was not responsible for “what has happened in the recent past”. He insisted that the people who committed the abuses had already “left the sinking ship and are now laughing at us”, adding that “it wasn’t because of Gypsies that the current situation has emerged”.
Asked about who he was referring to, he replied that “everyone is absolutely clear about who led the office of the ORÖ in the previous cycle”.
István Makai, chairman of the Roma Civil Bloc, said the events proved that Hegedűs has lost the support of the majority in ORÖ. He said Hegedus and Farkas, ORÖ’s former chairman, should “hold each other’s hand and leave the arena of Hungarian politics and Roma public life”, and the National Roma Self-Government should undergo a process of complete renewal.
Mihály Dancs, head of the Roma Civil Rights Movement, said ORÖ, in its present state, could not fulfil its role and it would be better if it were to dissolve itself and form a new organisation.