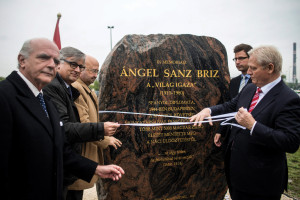 A road in Aquincum, in Budapest’s District III, has been named after Angel Sanz Briz, a Spanish diplomat who saved the lives of Jews during the Holocaust.

Addressing the ceremony, Gergely Gulyás, deputy speaker of Parliament, noted that the diplomat saved over 5,000 Hungarians. As such, he was the embodiment of the Spanish saying “Do good, regardless of whom you do it to”.
“Hungary bows its head to the memory of the outstanding diplomat and will forever be grateful to Angel Sanz Briz for his superhuman efforts, and, through him, to Spain and its citizens for the lives their compatriot saved,” Gulyás said.
He added that while it was no secret the Hungarian authorities had “participated in the implementation of the vilest deeds of mankind”, there were Hungarian individuals and foreign diplomats who had “chosen the path of resistance and to save lives”.
Budapest Mayor István Tarlós said “saving lives had been Sanz Briz’s priority”. Tarlós said the diplomat had asked for nothing in return for granting Spanish documents to Hungarian Jews, and he had been given no clear instructions from his government but helped people “without any authorisation, disregarding his own safety and spending a large part of his own funds”.
Spanish Ambassador to Hungary Jose Angel Lopez Jorrin noted that co-operation between Hungary and Spain over the initiative to name the road after the diplomat meant Sanz Briz was now honoured as other life-savers had been before him.
Spanish foreign affairs state secretary Ignacio Ybanez said a street in Madrid had been named after Sanz Briz last year, and Spain is committed to promoting the memory of Holocaust-era life-savers. “We cannot change or undo what happened in the past, but the passage of time is such that we must do all we can to prevent the most terrible events from happening again,” he said.
The commemoration was attended by Juan Carlos Sanz Briz, the diplomat’s son, and a delegation of over 30 family members.
Angel Sanz Briz (1910-1980) served as charge d’affaires in Hungary in 1944, and without prior authorisation from Madrid he rescued Hungarian Jews by housing them in the protected Spanish mission and by providing them with Spanish passports. The diplomat was later awarded Israel’s highest honour, the Righteous Among the Nations award.
The road named after him proceeds northwards from the K bridge of Hajogyari Island.