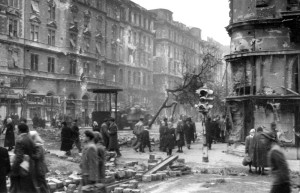 This Friday Hungary celebrates the 59th anniversary of the 1956 Uprising against the forces of the Soviet Union. Many articles have been written about the consequences of the events, so this time we have put together some historical background of what led to the bloody revolt and the rise of János Kádár.

For this we have to go back all the way to World War II, during which Hungary was a member of the Axis powers, allied with the forces of Nazi Germany, fascist Italy, Romania and Bulgaria. In 1941 the Hungarian military participated in the occupation of Yugoslavia and the invasion of the Soviet Union.
The Soviet army was able to force back the Hungarian and other Axis invaders. By 1944 Soviet armies were advancing towards Hungary. Fearing invasion, the Hungarian government began armistice negotiations with the Allies but these did not prove fruitful.
After the war the country came under the Soviet Union’s sphere of influence. At the time, Hungary was a multi-party democracy, and elections in 1945 produced a coalition government under Prime Minister Zoltán Tildy. However, the Hungarian Communist Party (later Hungarian Working People’s Party), a Marxist-Leninist group who shared the Soviet government’s ideological beliefs, constantly wrested small concessions in a process named salami tactics, which sliced away the elected government’s influence, despite the fact the party had received only 17% of the vote.
By the 1949 elections the communists took power and its candidate list stood unopposed. The People’s Republic of Hungary was then declared. At the same time the Soviets had concluded a mutual assistance treaty with Hungary, which granted the Soviet Union rights to a continued military presence, assuring ultimate political control. 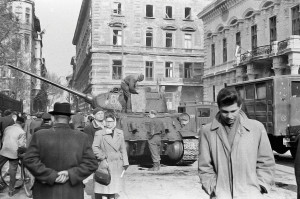 Hungary became a communist state under the severely authoritarian leadership of Mátyás Rákosi. Under his reign, the Security Police (ÁVH) began a series of purges, first within the Communist Party to end opposition to Rákosi. The victims were labelled as “Titoists,” “western agents” or “Trotskyists” for as insignificant a crime as spending time in the West to participate in the Spanish Civil War. In total, about half of all the middle and lower level party officials—at least 7,000 people—were purged.
From 1950 to 1952 the Security Police forcibly relocated thousands of people to obtain property and housing for the Working People’s Party members, and to remove the threat of the intellectual and “bourgeois” class. Thousands were arrested, tortured, tried and imprisoned in concentration camps, deported to the east or executed.
The Rákosi government thoroughly politicised Hungary’s educational system to supplant the educated classes with a “toiling intelligentsia”. Russian language study and communist political instruction were made mandatory in schools and universities nationwide. Religious schools were nationalised and church leaders were replaced by those loyal to the government. 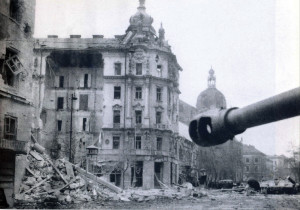 The post-war Hungarian economy suffered from multiple challenges. Hungary agreed to pay war reparations approximating USD 300 million – about USD 3.6 billion today if adjusted for inflation – to the Soviet Union, Czechoslovakia and Yugoslavia and to support Soviet garrisons. The Hungarian National Bank in 1946 estimated the cost of reparations as “between 19 and 22 per cent of the annual national income”.
In 1946 the Hungarian currency experienced marked depreciation, resulting in the highest historic rates of hyperinflation known. Hungary’s participation in the Comecon (Council of Mutual Economic Assistance) prevented it from trading with the West or receiving Marshall Plan aid.
Although national income per capita rose in the first third of the 1950s, the standard of living fell. Huge income deductions to finance industrial investment reduced disposable personal income; mismanagement created chronic shortages in basic foodstuffs resulting in rationing of bread, sugar, flour and meat. Compulsory subscriptions to state bonds further reduced personal income.
On March 5, 1953 Joseph Stalin died, ushering in a period of moderate liberalisation, when most European communist parties developed a reform wing. In Hungary the reformist Imre Nagy replaced Rákosi as prime minister, but Rákosi remained general secretary of the party and was able to undermine most of Nagy’s reforms.
By April 1955 he had Nagy discredited and removed from office. After Khrushchev’s “secret speech” of February 1956 that denounced Stalin and his protégés, Rákosi was deposed as general secretary and replaced by Ernő Gerő on July 18, 1956. Radio Free Europe would broadcast the “secret speech” to Eastern Europe on the advice of Ray S. Cline, who saw it as a way to “as I think I told [CIA director Allen Dulles] to say, ‘indict the whole Soviet system’.”
Meanwhile in 1955 the Austrian State Treaty and ensuing declaration of neutrality established Austria as a demilitarised and neutral country. This raised Hungarian hopes of also becoming neutral and in 1955 Nagy had considered “… the possibility of Hungary adopting a neutral status on the Austrian pattern”.
In June 1956 a violent uprising by Polish workers in Poznan was put down by the government, with scores of protesters killed and wounded. Responding to popular demand, in October 1956 the government appointed the recently rehabilitated reformist communist Wladyslaw Gomulka as first secretary of the Polish United Workers’ Party, with a mandate to negotiate trade concessions and troop reductions with the Soviet government.
After a few tense days of negotiations, on October 19 the Soviets finally gave in to Gomulka’s reformist demands. News of the concessions won by the Poles, known as Polish October, emboldened many Hungarians to hope for similar concessions for Hungary, and these sentiments contributed significantly to the highly charged political climate that prevailed in the country in the second half of October 1956.
Also, in the summer of 1956 relations between Hungary and the US began to improve. At that time the US responded very favourably to Hungary’s overtures about a possible expansion of bilateral trade relations. Hungary’s desire for better relations was partly attributable to the country’s catastrophic economic situation.
Before any results could be achieved, however, the pace of negotiations was slowed by the Hungarian Ministry of Internal Affairs, which feared that better relations with the West might weaken communist rule in Hungary. 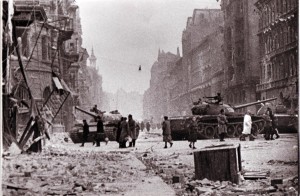 Rákosi’s resignation in July 1956 emboldened students, writers and journalists to be more active and critical in politics. Students and journalists started a series of intellectual forums examining the problems facing Hungary. These forums, called Petőfi circles, became very popular and attracted thousands of participants. On October 6, 1956, László Rajk, who had been executed by the Rákosi government, was reburied in a moving ceremony that strengthened the party opposition.
On October 16, 1956 university students in Szeged snubbed the official communist student union, the DISZ, by re-establishing the MEFESZ (Union of Hungarian University and Academy Students), a democratic student organisation banned under the Rákosi dictatorship.
Within days the student bodies of Pécs, Miskolc and Sopron followed suit. On October 22 students of the Technical University compiled a list of 16 points containing several national policy demands.
After the students heard that the Hungarian Writers’ Union planned on the following day to express solidarity with pro-reform movements in Poland by laying a wreath at the statue of Polish-born General Bem, a hero of the Hungarian Revolution of 1848-49, the students decided to organise a parallel demonstration of sympathy.
A day later the first shot of the revolution was fired.

This year’s official commemorations of the 1956 anti-Soviet Uprising have included exhibitions, film screenings and a walk through history in the Hungarian Radio building. The events began on Tuesday with a wreath-laying ceremony at the 1956 Technical University Memorial. The university, the site where students in 1956 set out on their famous march, hosted a second commemorative event on Wednesday involving a meeting of former students, followed by the annual torch-lit march to the Bem statue. On Thursday the national flag was raised with military honours by Parliament, and a show of traditional dances marked the revolution’s 59th anniversary. This was followed by more folk dancing shows and the Holy Crown was open to visits from the public free of charge in the Parliament building. The House of Terror Museum was also free to visit and the Museum of War History held a family day. Budapest Transport Company will commemorate the Uprising by putting on “nostalgia” carriages from the period for its tram lines 2, 4 and 6 this Friday and the weekend. Tram stops are housing small installations to aid recall of the events that took place in the area in 1956.