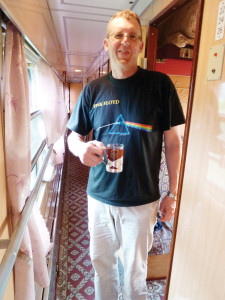 Travelling the Budapest to Lviv train is a real pleasure; This particular carriage belonging to Ukraine Railways carries a wondrous sense of romance and intrigue from a bygone era, with a graceful, old-fashioned décor and charm. This daytime venture travels through the wondrous Hungarian Puszta flatlands and then the contrasting and spectacular Carpathians hills and valleys of Ukraine, before arriving about 14 hours later. 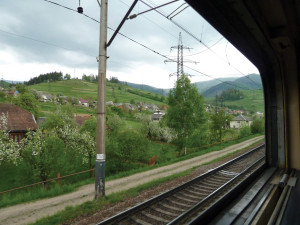 Note that, in either direction, this service no longer operates overnight, unless one is travelling  either onwards or coming from Kyiv to Lviv with the same service.
It is sufficient to buy a ticket with a compulsory reservation close to departure. This early morning train leaves Budapest’s Nyugati station at 7.23am for Lviv, and departs from Lviv at 6.30am for Budapest. After showing ticket and passport to the officials, I was shown to my compartment.
Fresh linen and blankets are provided, as it is possible to close the curtains and rest on the makeshift beds. Teas and coffees are also served by the hospitable lady cabin attendants throughout the journey. 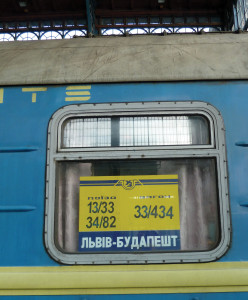 While in Hungary, this train stops at Budapest Lizst Ferenc airport, Szolnok, Debrecen and Nyiregyháza before arriving at the Záhony border, a little over four hours later. In terms of distance, one is about half-way there. In terms of schedule, this is not so! One still has to prepare and contend with the border.
The train stops for one hour at the edge of Hungary, the local border guards and customs officers step on board, the additional inland carriages are disconnected. Once all is complete, the Budapest-Lviv train proceeds over the majestic River Tisza to Ukraine. At this point, the clock moves one hour forward from Central European Time to the Kyiv time zone.
Fifteen minutes later, the train arrives at the Chop border town; the time is about 2pm. After the next lot of custom officials have come and gone, and after local border guards have taken everyone’s passports away for inspection at headquarters, the international carriages have to go through a rigorous procedure of being adapted to wider railway lines and fittings for use on the Ukraine rail system.
For train enthusiasts this is fascinating, as the changing of wheels is in plain view. But what makes the waiting wearisome is not so much this procedure, which understandably takes quite a time, as the fact that passengers are not allowed off the train either beforehand or during. This is obviously for security reasons, and by the time all passports have been returned and new adjustments made it is about 4pm and time to go.
Please may I recommend to Ukraine Railways that they allow travellers off at Chop while waiting, if they wish? Those not wanting to stay on board for so long can make their way to the very pleasant Chop National waiting room before continuing their journey. It is evening when the train finally proceeds beyond the spectacular Munkács Palanok Castle towards  the cool and calm of the Carpathians hills and valleys.
The scenery is at its most spectacular in the sunset between Volovets and Skole; with gracious green fields, alpine trees, wooden churches, horses and carts, and local people working the land, all gives a great sense of wonder before arriving at Lviv, Ukraine’s third-largest city, near to 10pm.
For those travelling from Lviv to Budapest, it is a morning ride through the Carpathians. The midday arrival at the border is one notable difference, with the clocks going back one hour to CET time. This train finally arrives at Budapest at 6.37pm. 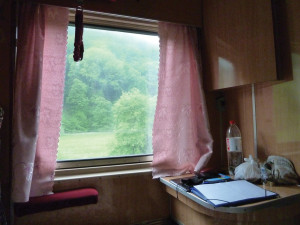 For those interested in Hungarian history, I recommend bicycling from Volovets to Verecke Hágó. This 25-kilometre each-way ride takes one through some very fine lush scenery before arriving at the famous commemorative 850-metre peak where Chieftain Arpad arrived in 896. The views are most spectacular.
My favourite bike ride in this region, although more demanding, is the 80 kilometres from Volovets to the legendary Szineveri Lake. This outstanding venture really does take one deep into the vast, silent, untamed wilderness before arriving at this wonder, which, once seen, is never forgotten.

It is good to have some local currency when travelling but exchanging loose Hungarian forints and Ukraine hryvnias for one another can be tricky. The exchange rates are not so favourable and there is a general lack of interest for either legal tender at most bureaus. Euros are far easier to deal with and recognised everywhere.
This may require more effort but should you wish not to be held on the train at either border, may I suggest getting to mid-way by local train? Then obtain a local crossing ticket at the border, cross over and purchase a follow-on train ticket at the other side and continue your journey. This involves three different trains all within the same amount of travel time. 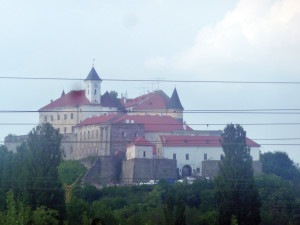 This is a rewarding experience. However, this journey comes in three almost equal parts: Hungary, Ukraine and The Border. To meet the demands of today’s travellers, time at the border must be reduced, even if this means a change of trains at Chop. Driving the car to and from Ukraine from nearby Hungary and Slovakia also has its drawbacks and is another story. The best way to alleviate these issues is when Ukraine joins the EU. At time of writing, there is no set date yet. Until then patience at the border is required.
Lviv and Budapest are grandiose and cultural wonders with much to offer all year round. There are many websites and cultural programmes. See tourinform.hu/ and www.touristinfo.lviv.ua/en/
From here, hotels can be booked, restaurants can be found and nearby excursions can be arranged, as well as picking up local tips for the best way to get around either town.