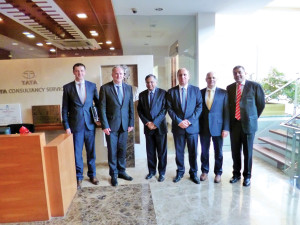 The Hungarian leadership sees remarkable potential in India, which is striving to fulfil the demands of its booming economy and of the growing middle classes by way of sustainable development and credible infrastructure, according to Hungary’s Deputy Minister for Foreign Affairs and Trade, László Szabó.

“In the framework of its ‘Eastern Opening Policy’, Hungary pays special attention to India, one of the most dynamic Asian countries,” Szabó said during his official visit this month to Mumbai, the financial capital of India, and Bengaluru (formerly Bangalore), the capital city of the southern state of Karnataka that is the hub of the country’s information technology industry.
In Bengaluru, the minister attended the second yearly meeting of the India-Central Europe Business Forum (ICEBF), where he impressed upon General (retired) V.K. Singh, India’s Minister of State for External Affairs, and his ministerial secretary (west), Navtej Singh Sarna, in the presence of a large number of corporates, the need to elevate the India-Hungary partnership.
“The significance of the South Asian region has been underpinned by the participation of more than 200 delegates from 18 countries in this Forum,” Szabó noted. “Also, the presence of Apollo Tyres, the Tata Group and SMK (Samvardhana Motherson Reflectec) and their strategic partnership with my government prove that Hungary serves as a hub and preferred investment destination for prominent Indian companies.”
Welcoming Indian businesses to Hungary, Szabó said the country has reformed its investment climate by measures such as corporate tax reduction to the lowest level – 10/19 per cent – in Central and Eastern Europe, a flexible labour code that favours employers, restructured tertiary education to better match labour market needs, renewed vocational training as per business requirements, free enterprise zones with special tax and contribution allowances, and a job protection action plan to improve the situation of vulnerable employees by reducing employer costs.
Dr Szabó pointed out that all of these fundamental changes have helped Hungary become an innovation and manufacturing hub of Europe. These achievements undeniably prove why so many Indian companies have found a second home in Hungary, taking advantage of its skilled workforce, affordable wages, world-class infrastructure and a business-friendly legal environment that offers access to the affluent consumers of the 500 million-strong EU market.
“In stark contrast to other EU countries, Hungary has shown impressive growth, its economy expanding by 3.6 per cent in 2014, one of the highest GDP growths in the EU against an EU average of 1.3 per cent,” he maintained. Szabó quoted a Forbes study ranking Hungary ninth on the list of recommended financial investment destinations in the world, and the FDI Magazine of the Financial Times Group crediting Budapest as Eastern Europe’s most attractive city for capital investment.
He indicated that one reason why so many companies from across the world choose Hungary as their base in Europe is its well-developed infrastructure of electricity, water and waste water management. Hungary was also advantaged by having the third-highest road density in Europe. The total length of the Hungarian national public road network was almost 32,000 kilometres, including more than 1,680 kilometres of expressways.
The country’s location at the heart of Central Europe also made it a key regional distribution centre. “Hungary is an integral part of the Trans-European Transport Network and is located at the crossroads of four trans-European and two European Rail Traffic Management System corridors, enabling easy access to all parts of Europe,” the minister observed. “The Danube-Rhine-Main Canal and the Danube-Black Sea Canal connect Hungary to Rotterdam and Constanta via Western Europe’s industrial heartland.”
Another attribute was its highly developed telecommunications system, both fixed and mobile, with fibre optic cables in all major settlements, giving access to high-speed data. GSM 900/1,800 MHz mobile providers had 100 per cent physical coverage and widespread 3G and 4G mobile coverage. The telecom market had been fully liberalised with numerous internet service and mobile network providers, rendering connectivity to any part of the world easy, smooth and economical.
Szabó said India had been a major partner of Hungary before the sweeping changes of the 1990s when rapid privatisation of the latter’s economy led to a surge in Western investments, and to the disappearance of traditional markets and dissolution of old commercial links, including with India. Over 25 joint ventures had been established by Hungarian companies in India before that time. Bilateral trade that had reached USD200 million in the 1980s could not be sustained, though it had revived as both countries were getting globally integrated. He also felt that the launch of direct flights between Hungary and India could facilitate greater people-to-people exchanges.
Indian investments in Hungary had risen in recent years, reaching USD1.5 billion, creating almost 10,000 jobs and spread across sectors such as IT, pharmaceuticals, power equipment, auto-components and food processing. Major among them were Genpact, Sun Pharma, Crompton Greaves, Bakony Wipers, Orion, Hema Engineering and Cosmos Fashions.
Szabó said Apollo Tyres is setting up its first greenfield investment outside India – a EUR 475 million facility in Gyöngyöshalász east of Budapest – and will start rolling out products by 2017. Automotive supplier, SMR (Samvardhana Motherson Reflectec), a leading rear-view mirror manufacturer present in Hungary since 1995, was building a factory in Kecskemét that would create up to 500 jobs and start producing bumpers and door panels from 2017-18.
Tata Consulting Services (TCS) had established an office in Hungary in 2001 and had now set up a large Global Development Centre in Budapest and an IT Centre of Excellence at Szent István University, Gödöllő, with a combined 1,500 personnel that served clients in 34 different languages.
He said that of Hungarian investments in India, Gedeon Richter Plc, established in 1901 and a large pharmaceutical company of Central Europe, has a joint venture, Richter-Themis Medicare (India) Pvt. Ltd, in Vapi, in the western Indian state of Gujarat, since 2004. Budapest-based BHE Bonn Hungary Electronics Ltd was a supplier to the Mars Orbiter Mission of 2013 of the Indian Space Research Organisation (ISRO), with its BMCD35 microwave downconverters for ground stations receiving telemetry and Doppler ranging signals of the spacecraft.
This was the first time a product designed and manufactured by a Hungarian aerospace company was part of an interplanetary spacecraft mission. Apart from such collaboration, Hungarians were also interested in Indian dance, music, yoga and meditation, there being over 200 yoga centres and six schools of Indian dance and music in Hungary. 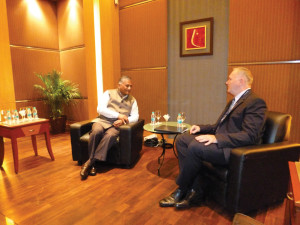 “India is a significant partner in our foreign policy and we desire improving the knowledge of Hungarian companies about India and their outreach to Asia,” Szabó said. “As part of this endeavour, Hungary’s Institute for Foreign Affairs and Trade, in collaboration with the Indian Embassy in Hungary, held an export and investment promoting ‘Make in India’ seminar in Budapest in September.”
The next session of the Joint Indo-Hungarian Economic Committee and Business Forum scheduled for December in Budapest would provide an opportunity to further develop and strengthen ties. Szabó added that the Hungarian National Trading House would be opening an office in New Delhi next year, and its purpose would be to support export-oriented enterprises by finding adequate business partners on the international markets. These enterprises would also provide state guarantee to their partners in order to facilitate secure trade activities that were mutually beneficial for both parties.
“Given that we stress on the support of small and medium enterprises (SMEs) and wish to increase their contribution to the GDP by 20 per cent, we seek New Delhi’s support towards a Hungarian-Indian SME Fund to help foster these enterprises,” he said.
When Prime Minister Viktor Orbán had visited India in October 2013, he had participated in an Indo-Hungarian Business Forum jointly organised by the Confederation of Indian Industry (CII) and the Federation of Indian Chambers of Commerce and Industry (FICCI). The event had witnessed the signing of four Memoranda of Understanding (MoUs) and two Letters of Intent (LoIs).
While the four MoUs were on traditional systems of medicine, co-operation in the field of sports, co-operation in defensive aspects of microbiological and radiological detection and protection, and a cultural exchange programme for 2013-2015, the two LoIs were on revision of an air services agreement and for an Indo-Hungarian Strategic Research Fund with enhanced contribution of EUR 2 million each for 2014-17.
Dr Szabó envisions even individual potential among the 29 states and seven union territories of India, a country of 3.29 million square kilometres and 1.25 billion people. “Strengthened co-operation with Indian states can serve as another pillar of Indo-Hungarian relations. Even though Poland has been the partner country of the ICEBF, it was Hungary which achieved the most remarkable result at the ICEBF with the signing of an MoU with the southern Indian state of Karnataka in the presence of its Minister for Higher Education and Tourism, Mr R.V. Deshpande.”
On the sidelines of the forum, Szabó conducted meetings with representatives of Tata Projects Limited and the State of Andhra Pradesh to discuss co-operation in water management. He held talks with FICCI president Dr Jyotsna Suri, who is also the chairman and managing director of Bharat Hotels Limited, and elaborated about further possibilities for co-operation between HIPA and FICCI that had already begun in 2013.
There are several agreements, such as an MoU between the Hungarian Investment Promotion Agency (HIPA) and FICCI, and a bilateral cooperation agreement between the EXIM Banks of Hungary and India, both signed in 2013.
“Additionally, our representatives of HIPA and Hungarian Export-Import Bank Plc. (Eximbank) also participated at the bilateral meetings and offered sector-specific support and information to our partners,” noted Szabó. “HIPA supports investments with a one-stop-shop service and as part of the support package, undertakes all-inclusive project management for projects granted direct cash subsidies (EKD) by a discretionary government decision, and provides VIP treatment and comprehensive information about other subsidies available.”
The Hungarian Government, through HIPA as intermediary, offered a wide range of investment incentives such as cash grants, development tax allowance, training subsidy, workshop establishment aid and social tax allowance. Subsidy for large investment projects was also subject to an adjusted regional aid ceiling. He said the objective of the Hungarian Eximbank and the Hungarian Export Credit Insurance Plc. (MEHIB) is to serve Hungarian exporters through the provision of effective financing and insurance facilities.
In Bangalore, Szabó visited Infosys Limited, India’s second-largest IT company, to inquire about its expansion plans in the CEE region, and he provided information to the company’s leadership about the Hungarian investment and business environment. After ICEBF, he conducted meetings in Mumbai, where he held talks with C. Vidyasagar Rao, Governor of the state of Maharashtra of which Mumbai is the capital city. The minister provided the governor an overview of the economic and political state of affairs between India and Hungary.
Potential fields of co-operation were outlined by Szabó, such as biotechnology, water management, renewable energy, health care, urban development, automotive sector and infrastructure development. With regard to these sectors and in line with the Hungarian government’s export and investment promotion goals, he met Bombay Chamber of Commerce and Industry (BCCI) director general, Vikas Gadre, TCS chief executive officer and managing director N. Chandrasekaran and Yash Raj Films vice-president (production) Aashish Singh.
While tourism is indeed an important part of the promotion of the “Hungary brand”, special attention must be given to cultural and educational co-operation as well, Szabó emphasised. In line with this, he discussed areas of strengthened collaboration with Mumbai University vice-chancellor Dr Sanjay Deshmukh, highlighting the recently established first Ayurveda Department of Europe in Debrecen, besides reiterating the offer by the Hungarian government for 200 scholarships to Indian students and researchers.
There is a small resident Indian community in Hungary comprising mostly professionals in IT industry and business, including a transient community of about 80 students who are studying in various universities of Budapest, Pecs, Szeged, etcetera. From time to time, there is an exchange of research scholars and scientists for a period ranging from three weeks to six months under bilateral exchange programmes. In addition there are a few Indians who are married to local Hungarians and permanently settled in Hungary. In recent years, the number of Indians in Hungary is estimated to be around 350.