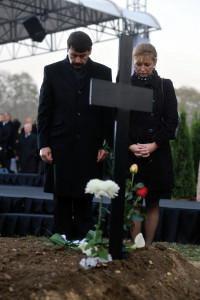 Instead of giving his planned speech dealing with “burning national problems”, Imre Mécs acceded to the wishes of the family of the late former president Árpád Göncz, and delivered a valediction on a more personal note at last Friday’s funeral. Later in the day Mécs got the chance to deliver the full speech in Kossuth tér. 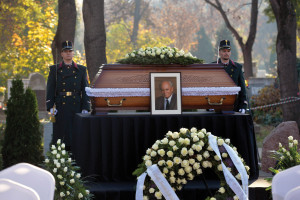 According to his family, Göncz had asked that Mécs, a founding member of the liberal Alliance of Free Democrats, address the funeral, but when it transpired that Mécs intended to introduce political elements into his speech, the family asked him to refrain. At first he declined to give the speech on these terms, but eventually agreed to reflect on the former president in a more personal way.
“You became the best head of state of all times, someone loved by the people, who could also be rather strong-minded when need be,” said Mécs, who got a life sentence together with Göncz after the ill-fated 1956 revolution. He said the president had rescued Hungarian society and Hungary’s rule of law from the mistakes that could not be avoided during the transition to democracy in 1989-90. Mécs characterised Göncz as “an advocate of the poor, the oppressed and those deprived of their rights”. 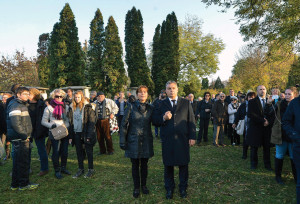 Márton Benedek, the late president’s eldest grandson, said Göncz had worked throughout his life for Hungary’s becoming a Western-type liberal democracy based on freedom, human rights and social justice. “Our task is to fulfil his dream and foster his intellectual heritage,” Benedek said.
Asztrik Várszegi, Archabbot of Pannonhalma, characterised Göncz as a man who loved the people, the Hungarian nation and humankind, a man “filled with a strong desire for freedom”. Göncz was a man of faith who “interpreted the Word of God radically”, the archabbot said.
The funeral was attended by several Hungarian and foreign state leaders, politicians and public personalities, including President János Áder and his predecessors László Sólyom and Pál Schmitt, as well as Austrian Federal President Heinz Fischer. Prime Minister Viktor Orbán and his wife stood far from the state leaders, in the last rows of the mourning crowd to comply with the wishes of Göncz who asked that the funeral not be a political event.

Later in the day, Orbán commemorated Göncz at Lendava, a border town in north-eastern Slovenia. “There is a town near here called Cakovec, where Lajos Göncz, a captain during Hungary’s 1848-49 war of independence, lived,” Orbán said. “His great-grandson, Arpad Göncz, a due follower of that tradition, became the first president of Hungary after its transition to democracy. We paid tribute that is due him as the president of all of us, a president of the nation. We thank him for what he has done for the homeland and for us.”
In the evening Mécs addressed a demonstration attended by hundreds of people in front of Parliament, and he called it untenable that the Eternal Flame dedicated to the memory of the 1956 Revolution and set up from public donations, under Árpád Göncz’s proposal, had been removed from the square during its recent reconstruction. 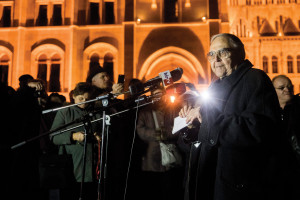 Mécs delivered his full speech at Kossuth tér
in the evening

Mécs said the memorial had been removed by those in power, “by one-time Young Democrats, who compromised their former principles to cement their rule” and “institutionalised corruption”. For this reason, not only the flame, but also the spirit of the 1956 Revolution and democracy should be restored, he said.
Hungary should return to the “clean spring”, the era of regime change, because in the absence of unity the country would never become a democratic rule of law again. Addressing a message to the left wing, Mécs said that “insignificant, vying groups of politicians fail to democratise Hungary – they are mere props in a play stage-managed by the government”.