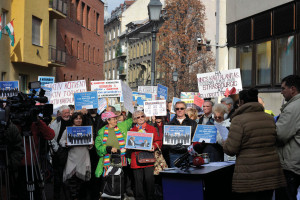 The ruling prompted a demonstration
in front of the Constitutional Court

Hungary’s top court has axed some parts of a law on compensation for investors of failed brokerage Quaestor. The Constitutional Court said the law on a top-up fund set up to help Quaestor clients discriminated against some investors when determining eligibility, and it placed disproportionate ownership restrictions oninvestment service providers involved in the compensation, while providing insufficient time for preparation as well.

But the court said its ruling did not mean that the compensation process itself was unconstitutional, and legislators had the option of drafting a more adequate law. Six out of 14 judges filed a minority report with the ruling.
Quaestor investors were already eligible for compensation from the Investor Protection Fund (Beva) for up to 20,000 euros, but lawmakers approved legislation that effectively raised the threshold to about 100,000 euros, while leaving Beva members to cover the difference. Beva earlier estimated the top-up fund would reach almost 100 billion forints, or 320 million euros.
Chairman of the court Barnabás Lenkovics told state news agency MTI on Tuesday that the law on compensating Quaestor victims is repairable and can be made constitutional. In the current form, the law is not applicable but this does not mean that its basic purpose is unconstitutional, he added.
Hungary’s Banking Association welcomed the Constitutional Court ruling and called it a “good direction”. Levente Kovács, general secretary of the association, told MTI that taxpayers “cannot be made to pay compensation to investors seeking higher than average yields”.
He argued that “hunting for profits” involves risk, which should be borne by those embarking on such business rather than by “people or organisations that have nothing to do with it”. Hungarian banks work in a “regular and honest” way, and cannot be held responsible for the activities of brokerage companies outside the banking sector, Kovács said.
The ruling Fidesz said the Constitutional Court decision to axe parts of the law served the interests of the banking sector, while opposition parties again called on the government and central bank to take responsibility for the scandal. Fidesz said it was the banks that had halted compensation for the victims by turning to the top court over the law. The party said the court’s decision brought into question whether victims of the fraud can be paid any interest as part of the compensation.
The opposition Socialist Party said it expects the government to swiftly compensate not just the victims of Quaestor but also those of Buda-Cash and Hungaria, two other brokerages that went bust this year.
Party leader József Tóbiás called on Fidesz to clarify its position on the brokerage scandals and whether it “still wants to defend the central bank, which is clearly partly responsible” for the losses incurred by the defrauded. Tobias said the central bank’s financial responsibility for compensating victims should be written into law.
The opposition Együtt party said the central bank should pay for the portion of the compensation that cannot be financed from Quaestor’s assets. Levente Pápa said his party does not consider the Constitutional Court a “legitimate judicial body”, arguing that it has been “reduced to nothing more than the government’s toy”.
He said the ruling was “yet another episode in a well-constructed stage act”, and the government and Fidesz had planned all along to draft a bill that was “impossible to comply with”.
Green opposition LMP said that after the court’s ruling the government should quit trying to “tweak” problematic parts of the law and instead offer a comprehensive solution. Lawmaker Bernadett Szél said the compensation law was “all about Fidesz trying to distance itself from the scandal when it is obvious that it is very much involved”.
She said victims must be compensated for the money they lost. Szél said LMP would continue to push for an investigative committee tasked with uncovering every scandal similar to the Quaestor bankruptcy, and proposing regulations to prevent further such scandals.
The opposition Liberal Party welcomed the court’s decision and said that those responsible, and not the victims, should have to “pay for Quaestor’s crimes”.