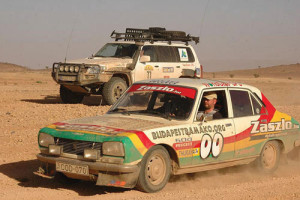 Lynching by locals if you hit a man or animal is one of the hazards to expect if you have the wherewithal to compete in the Budapest to Bamako rally, organisers warn (hitting a woman is not mentioned). Other dangers are kidnapping, terror attack, imprisonment, bandits and thieves, corrupt officials, food poisoning, sunstroke and sandstorms, not to forget dehydrating in the desert. Nonetheless, competitors are preparing now for the annual event in January.

The 8784-kilometre “charity rally, competition and crazy driving adventure” begins on January 15 and concludes 16 days later in Bamako, which means that drivers and riders will average 549 kilometres a day through Europe, Morocco, Mauritania and Mali. On the way participants are promised spectacular mountain roads, rocky paths across the Atlas and Sarhro mountain ranges, dirt tracks through the Sahara Desert, sand dunes and salt flats.
It is a gruelling two-week drive on hostile terrain and, apart from the hazards, teams will get a glimpse of the semi-nomadic Tuareg life and other Saharan cultures, plus “friendly” African mud villages.
The aim of the race is not just fun. Participants bring help to local communities in the form of donations such as clothing, mosquito nets and medication. A charity truck will help transport the items.
Raphael de Colnet is a 27-year-old Frenchman from Angers who will cap a year in Budapest working for an international removal and storage company by partaking in the great adventure. He will ride on his soon-to-be 35-years-old Yamaha XT 500 motorcycle, aka “Marguerite”. 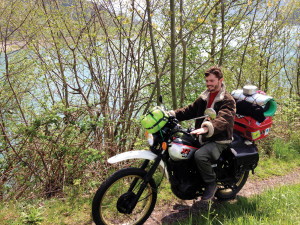 What about the lynching or kidnapping? De Colnet says: “My heart really jumped into my chest when I heard about this Budapest-Bamako crazy project. They say it is for ‘Anyone, by anything, by any means.’ I immediately knew I should join with ‘Marguerite’.
“I’m an avid biker striving for adventure with a cause. Not any type of biker but one who loves riding old mystic machines through adventure, damp, dry sandy or muddy places.
“My life has taken me to many countries where dirt roads exist, such as South Africa, USA, the Philippines and now Hungary. I have been riding in one of the most dangerous cites in the world for motorcyclists, Manila. I have been riding off-road in the jungle of Laos and I am still alive.
“With a zest for adventure and safe methods and preparation, the dangers can be easily avoided. The challenge will be to perceive danger ahead and not fall into traps.
“I am very excited and the fear of insecurity in this part of the world makes me very proud not to stop just because of this. It is easy to dream about such a project, looking at sandy desert scenery while sipping a cold drink and admiring off-road vehicles leaving for adventure. I decided it will not happen only on a TV or computer screen, I will do it.”
This Budapest-Bamako will be the 11th. It calls itself the world’s largest amateur rally and the spiritual heir of the defunct Paris-Dakar event, keeping alive the flame of trans-Saharan driving adventures. On the night of the start, “race tasks” take place in Hungary and Slovenia. Teams have to get to Genoa in Italy or a Spanish port for the ferry crossing to Morocco. 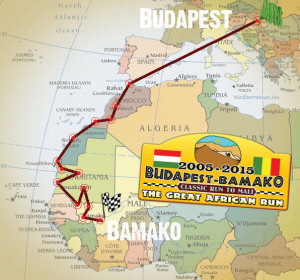 The event is described as low-budget. Entry fees apply but some can go for free, for instance “if you drive industrial trash or any old beat-up jalopy… a funny car, an ambulance, a fire engine, a car/motorcycle that’s older than 30 years and is generally unsuitable for such a journey… “
But the rally is “a minimal assistance adventure… no rescue helicopters, tow trucks, translators, lawyers, tour guides. You must rely on your own luck, resources and skills.”
At latest count, 120 cars and 11 motorbikes are joining the 11th edition, which adds up to about 300 people from 25 countries.
De Colnet is looking at a budget of EUR 5000 to bring supplies to communities, obtain visas, prepare the motorbike, help with petrol, fix broken parts.and get back from Bamako, the capital of Mali. For instance his bike can display company logos. He expects extensive media coverage of the rally and will record his own videos for release on social media.
FirstMed, the private health clinic with two locations in District II, is sponsoring vaccines and offering financial support for the rally, and GoPro will sponsor some cameras for the trip.
www.facebook.com/raphael.decolnet
www.budapestbamako.org/en