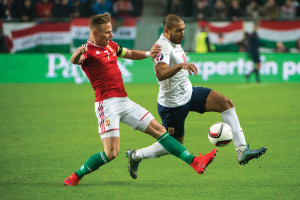 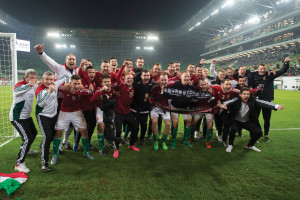 Hungary is through to the Euro 2016 football finals in France after play-off victories against Norway, 1-0 in Oslo last Thursday and 2-1 in Budapest on Sunday. Hungary will be competing in European Championship finals for the first time since 1972, when it came fourth. Hungary is benefitting from Euro 2016’s expansion to 24 nations, from 16 previously. The national team never fell behind in either of the two playoff victories against a disappointing Norway. An early strike by Tamás Priskin gave Hungary the lead in the return leg on Sunday but it wasn’t until the 83rd minute that fans could relax, when Markus Henriksen scored an own goal, giving Hungary a 3-0 lead on aggregate. Henriksen did make amends five minutes later. “I think we deserve to go to France 100%,” coach Bernd Storck, of Germany, said. “I think we employed the right tactics today and in Oslo – that was the key to our success.” Storck noted that even those who don’t play regularly with their clubs played with confidence and without fear. On Monday his tenure was extended by the Hungarian Football Association until the end of Euro 2016. The 24 teams await the draw in Paris on December 12. 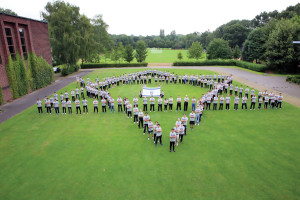 Budapest has been selected to host the 2019 European Maccabi Games, the biggest European competition of Jewish athletes, Motti Tichauer, chairman of the European Maccabi Confederation, said on Sunday. Budapest competed with Basel for the ten-day series of events. With nearly 2,500 athletes expected, the games will be Hungary’s biggest sporting event in 2019, organisers said. The government announced in October that it would part-finance Maccabi with 2.1 billion forints.

Budget airline Ryanair has announced a new weekly Budapest route to the Canary Islands’ Gran Canaria from April as part of a significantly expanded summer 2016 schedule. A new twice-weekly winter route to Eilat Ovda in Israel has also been launched. Ryanair marketing manager Katarzyna Gaborec-McEvoy announced the services with seats to the two places from HUF 2999 for a few days, now finished.

The State Opera House in Budapest plans to close for a nine-month renovation next year. Opera director Szilveszter Ókovács said: “Thorough preparations have been made.” A government decision on the iconic building on Andrássy út would be made in January or February, he said. The state opera also puts on productions in its other venue, the refurbished Erkel Theatre in District VIII, and it has completed a conversion of a former railway warehouse for multiple use, including set building.

Parliament’s defence committee has dismissed a request by the opposition to look into September’s clashes between migrants and police on the Hungarian-Serbian border near Röszke. Mátyás Firtl, the committee’s deputy head (KDNP), said the committee had rejected the motion filed by four DK lawmakers – among them party leader Ferenc Gyurcsány – with one vote in favour and six against. The motion sought to uncover “how and why refugees started making their way through the barricade between Hungary and Serbia” as well as “the reasoning behind the disproportionate police action”. Firtl said several videos of the clashes showed that migrants “behaved in an unacceptable manner towards Hungarian police” and tried to cross the border illegally. “There is no reason why Parliament should address the clashes,” he said, and it was crucial that the current peaceful conditions on Hungary’s borders are upheld so the European Union could find a joint solution to the problems in the source countries of the migration wave. 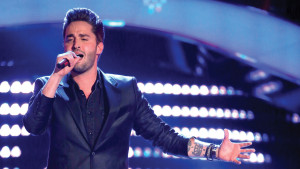 Despite delivering a stunning performance on Monday, Hungarian-American singer Viktor Király was forced to say goodbye to the live show of the US talent sequel “The Voice” broadcast by NBC. The 31-year-old New York-born Hungarian singer was a member of the team coached by Gwen Stefani but the American star decided to choose fellow team member Korin Bukowski instead of Király to follow Jefferey Austin and Braiden Sunshine who progressed first after gaining most votes. Ellie Lawrence and Regina King were also eliminated. Király told Hungarian commercial channel TV2 he was rather surprised after hearing the result because he did not feel sad at all. “I am very proud of what I have achieved so far and I am very grateful to my fans,” he said.

The government could introduce a low-cost basic internet service, reduce the VAT rate on internet service to 18pc and put free wifi in all settlements, daily Magyar Idők has said, citing unnamed government sources. Based on the results of a national consultation on the internet as well as talks with market players, professional interest groups and civil organisations, a bill on “net neutrality” is reportedly being drafted. The cabinet is also working on a comprehensive digital public education strategy, according to the paper. A programme could be launched to develop wifi in schools as well as a scheme to keep children safe from digital threats. Tax allowances could be offered to Hungarian startups. 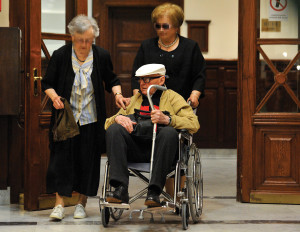 Chief Prosecutor Péter Polt has turned to the Kuria, Hungary’s Supreme Court, over the case of Béla Biszku, whose trial was repeated under a June court ruling, daily Magyar Hírlap has reported. Géza Fazekas, spokesman for Polt’s office, said the complaint is that the higher court which ordered the retrial had not disclosed any evidence of a legal breach, and was therefore in breach of the law itself. Béla Biszku, Hungary’s interior minister in communist times, pleaded not guilty in the second trial in October to charges of committing war crimes after the anti-Soviet uprising in 1956. In June a municipal appeals court annulled a lower court ruling of 2014 declaring him guilty of instigation and complicity to homicide, and ordered the new trial. The primary court sentenced the now-94-year-old to five years, six months in prison.