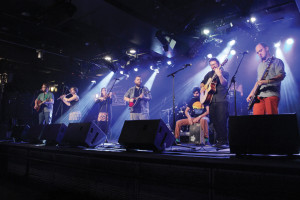 We live in divisive times. Debates on social issues are polarising our communities. Families are being torn in two as differences in opinions on the refugee crisis and how to deal with terrorism run ramshod over familial allegiances. Facebook updates, Tweets and blog posts reveal a side of friends that perhaps we never knew and now need to deal with. I’ve been thinking how nice it would be to get away from it all, but even if I spent a week in a hermitage cut off from the rest of the world, I’d still have to deal with my own company and my incessant questioning of life today. I need a break.

Last weekend, I wandered into Jack Doyle’s, a popular Irish pub and restaurant here in Budapest. I knew they’d have live music but I wasn’t quite prepared for what I got.
Traveller’s Company is the banner under which seven young Hungarian musicians, all in their early twenties, play their music. It took me a little time to get my head around hearing “Whiskey in the Jar” sung in Hungarian. Afterwards, they told me that they’d kept the music but that their bass player, Kisteleki Márton, had changed the lyrics – my Hungarian isn’t good enough to tell the difference so I was none the wiser.
Their version involves a man, a woman, a pub, a broken heart and a bottle whiskey. Meeting Captain Farrell on a trip over the Cork and Kerry mountains is but a vague and distant memory.
When I asked them why they chose traditional Irish music, being Hungarian and all that, they said that it fit. They’re into Hungarian folk music and gypsy music and traditional Irish fits right in. Talented musicians all, their repository of instruments includes banjo, guitar, mandolin, Irish bouzouki, flute, tin whistle, saxophone, bass guitar, cajón box drum and violin.
Vocalist Rózsa Márk has captured the soft Irish “t” perfectly and his rendition of “Hard Life”, a song they wrote themselves, would stand up against the best of Irish ballads. For a few minutes, I was transported back home to a pub in Ireland, foot tapping, eyes smiling, enjoying that general feeling of bonhomie that comes with a good night out in the company of fine people.
It’s a pleasure to listen to musicians who really enjoy playing rather than simply go through the motions. I was very taken with them, and I wasn’t the only one.
The audience was mixed – all ages, all nationalities. I asked Juan Orozco from Costa Rica why it worked for him – a Hungarian band singing Irish music. “Because both cultures have the same feeling in their music and in their partying,” he said. “They’re both energetic and make the listener want to party and feel good.”
He nailed it. The band’s mission is to sate those whose souls have a thirst for happiness.
There’s a pride that I feel when I see part of my Irish culture and heritage so richly embedded in that of another country. As I watched these young people in action, I was proud that they had adopted the best of Ireland as their own. It cheered me up.
And they taught me a lesson or three. Instead of focusing on our differences, wouldn’t we be much better off discovering our similarities? Instead of being threatened by others taking what we have, wouldn’t it make more sense to share our riches and our talents? Instead of turning inwards and building fences to jealously guard all we’ve worked for, perhaps it’s time to open up those gates and let the winds of change work their magic.
As French philosopher Michel de Montaigne said back in the 1500s, the most universal quality is diversity. We should celebrate it, not fear it.

Mary Murphy is a freelance writer who delights in the occasional Irishness of Budapest.  Read more at www.stolenchild66.wordpress.com