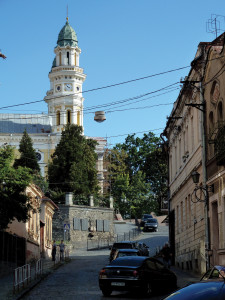 Uzhgorod, or Ungvár as it is known by Hungarians, is an inspiringly pleasant place in western Ukraine. The varied architecture and culture give a vibrant atmosphere to this lively university town, which also has a touch of quaintness.

Walking through the old town with its Baroque cathedrals around Korzo and Voloshin streets, on to a cobble-stoned lane towards the Greek Catholic Cathedral, on to the castle and the Transcarpathian outdoor Museum of Folk Architecture, is a real pleasure.
A detour along the River Uzh embankment, with its fine row of lime trees leading towards the Central Pedestrian Bridge, with the old town on one side and busy Petőfi Sándor Square on the other, makes this enchanting town a must-see for a weekend and a wonderful introduction to this lesser known region.
Uzhgorod, formerly known as Ungvár, was part of Hungary before Trianon in 1920. It is Transcarpathia’s largest city and three kilometres from Slovakia. The Hungarian border is also close by.
This immediate inner area makes up the town’s social scene, where the “Uzhgorodets”, as they call themselves, like to be. Whether at the theatre or in the restaurants and bars, this town has a Balkan feel and much to offer The Budapest Times readers.
The most prominent landmark is the beautiful Greek Catholic Cathedral, with its distinctive yellow twin towers overlooking the town. Then there is the fine open-air Museum of Folk Architecture, where one can gaze with wonder at the enchanting wooden churches and houses that date back some hundred or more years; bought together from various parts of this region and beautifully restored.
Also highly recommended are the Bokshay art museum and Ilko gallery. Both have wonderful displays of modern and bygone artworks by local artists, capturing much of Transcarpathian life, culture and scenery.
Uzhgorod/ Ungvár is not Soviet influenced as some may expect. Shadowy relics from that era occasionally appear, especially at the border with Slovakia and the dreary tower blocks that line the streets as one arrives in town. But don’t be put off by either of these intimidating features, or by today’s Ukraine political crisis.
Western Ukraine is generally safe and Uzhgorod, with its friendly people, is a very European city. For travel advice, consult the Foreign Ministry website.
The resourceful Tourist Information Bureau (www.zakarpattatourism.info) provides details about accommodation, restaurants, cultural programmes, bicycle hire, excursions and more. It is easy to find, by the Greek Catholic Church.
For those who wish to tune into local media, there is Tysa FM radio and Tysa TV, with lively informative mixes of entertainment, news, interviews and so on. 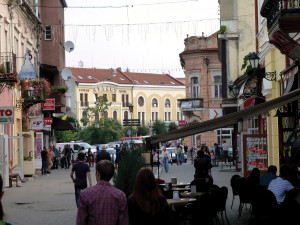 There are regular trains from Budapest to the Záhony border town. This pleasant journey through the sweeping Puszta flatlands takes a little over four hours, passing Liszt Ferenc Airport, Szolnok, Debrecen and Nyiregyhaza.
Once at the end stop, one must change to a local border crossing train that passes over the scenic River Tisza and arrives at Chop, Ukraine, 15 minutes later. After passport and customs clearance, the nearby “Marshrutka” buses and taxis will take you the final 25 kilometres of what is a half-day journey to Uzhgorod.
There is the M3 that leads to the border but waiting to cross can be wearisome. The only real way to alleviate the heavy traffic is when Ukraine joins the European Union, and at time of writing there is no set date. Until then, just persevere.
May I suggest travelling at non-peak hours to avoid delays? As you cross over, take note of the time difference because Ukraine time is one hour forward from Central European Time. For those with EU passports, visas are not required.
Changing euros for Ukraine hryvnias is easy but exchanging Hungarian forints can be tricky. There are plenty of banks and cash machines in town. 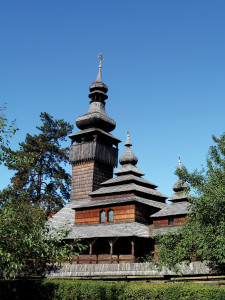 Despite general bad media for having many bumpy roads, if you abide by such conditions as you would anywhere else, then driving is fine. Beyond this, there is much hospitality and traditional Ukrainian cuisine really provides: the Bosch soup – dramatic in colour, exciting in flavour – is world renowned.
Follow it with the Holubtsi rolled cabbage specialities with meat, rice and often served with tomato sauce or cream. And the Vareniki potato dumplings that come as meat and cheese savouries, or the sweet varieties with cherries and apples are delicious. This region also produces its own top quality wines.
An excellent restaurant is “KOMOPA” (as written in Cyrillic), which reads as “Komora” in Roman, at 23 Korzo Street in the old town. This specialises in local Transcarpathian food and the interior is decorated with light, cheerful regional themes. I go there every time I am in town.
Also highly recommended is the Lviv Handmade Chocolate coffee and chocolate shop on the other end of Korzo Street, facing the river. Its wonderfully sophisticated  up-market offering awaits those in need of the best brew and cakes in town, as well as other tea-related essentials.
Both places have friendly staff, a good crowd, free Wi-Fi and await your arrival.
As for communications, some of those in the service industry, as well as many students, speak good English, German and neighbouring languages. Much of today’s tourist information and menus is written in varying languages, as compared to my early travels to this region 10 years before.
For an interesting excursion, I recommend the legendary Munkács Palanok Castle, which is easy to reach by local transport. This beautifully restored fort, museum and art gallery in Mukachevo (known as Munkács by Hungarians) is the home-town of Munkács Mihaly, a celebrated and outstanding Hungarian artist of worldwide fame.
Although some place names are written in Roman script alongside the Ukrainian, I advise getting acquainted with the Cyrillic alphabet for more effective travelling.  Jó utat!

You can see a film here