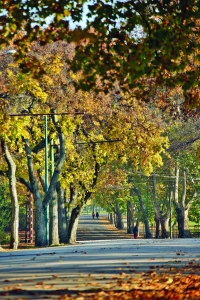 Beautiful warm colours, rusty leaves – autumn also offers some nice features to apologise for the grey, windy weather. Since fresh air never hurt anyone, there is no reason not to take an autumn walk in Budapest.

The popular island on the Danube, which was named after the king’s daughter Margaret, who became a nun later on, is one of the most beautiful spots in Budapest in autumn as well.
In the rose garden and the Japanese garden you can find plants with especially beautiful colours. For example in the Japanese garden you can spot bright red plants between the other plants.
Beside the luscious greenery you can also see the ruins of the former Franciscan monastery. The 13th-century monastery was home to the lady who gave her name to the island, before she died at a young age.
In addition to the monastery it’s worth to visit the 57-metres-high water tower. This is the symbol of the island and it is part of the UNESCO world heritage.
For those people who don’t mind the cold and keep a sporty lifestyle also in wintertime, the five-kilometre running tracks around the island offer a nice view while exercising. 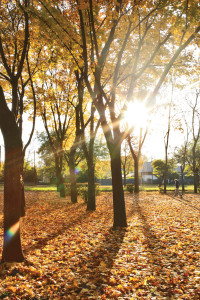 Just a few kilometres to the east you can find the City Park in the direct proximity of Andrássy út and Heroes’ Square.  Besides the relaxing wooden armchairs, pretty little bridges and nature with nice autumn colours, the park, similarly to Margaret Island, also offers some sights.
One of them is Vajdahunyad Castle. Its appearance is composed of the different architectural styles of historic Hungary, and includes in total 21 different buildings. Every one of them symbolises an already existing building in Hungary. For this reason it is not surprising that you can find elements from gothic, renaissance and romantic architectural styles.
A part of the building complex contains the Agricultural Museum. Directly at the door you can find the entrance to the tower, which when climbed offers a nice view of the surroundings.
Within the castle you can also see the statue of Anonymous. This represents a seated man with his face hidden within the hood of his cloak. The legend is that he is the first to write the chronicle of Hungary.  Another 12 statues are spread around the park.
You can also find the zoo and botanical garden within City Park. The zoo opened its gates on August 9, 1866 and receives over one million visitors each year. Especially the children are happy to see the more than 500 kinds of animals and even more sorts of plants. 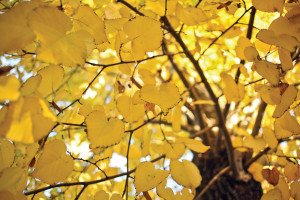 Not only popular things can be beautiful though. Besides the parks and the squares, which are all around Budapest, sometimes there are some large and small streets that also have their own beauty. The leaves of the trees along Reviczky utca in District VIII are shining in a sort of bright pumpkin-coloured orange, while other streets revel in yellow due to the acacia trees, and at other places orange is the dominant colour.  Every district has its own wonderful autumn streets. The easiest way to find the ones near you is to take a walk in your neighbourhood.

In case of bad weather

Everyone knows that autumn brings along bad weather as well. However, you don’t need to cancel taking a walk for that reason. If you have the opportunity to warm yourself with a hot coffee, tea or hot chocolate afterwards, the whole program was worth it two times already.
You can find cafés all around Budapest in all the different possible price categories, even off the large main streets. One of the top suggestions is Le Petite Bistrot at 26/b Hajós utca, District VI. This small shop, which looks like a French café from the outside, is decorated fully in old, so-called vintage style.